No can accuse actress Pollyanna McIntosh (best known to many of you from her work of “The Walking Dead”) of not being ambitious with her directorial debut, “Darlin'.” Here is a film that is simultaneously trying to be a gory horror shocker, a pitch-black (with many splashes of red) comedy, an angry piece of social commentary, a thoughtful coming-of-age drama and a sequel to a film with a small but devoted cult following. This would be a tall order for even an experienced filmmaker to pull off successfully, and it's not surprising it never quite manages to pull the various elements and tones together into a satisfying whole. And yet, while it does not really work—at least not enough to warrant a full recommendation—"Darlin'" is one of those films where some of the stuff that did work was good enough to inspire me to hold out hope practically right up to the closing moments that it would all somehow all pay off in the end.

The film is a sequel to “The Woman,” a controversial 2011 collaboration between Lucky McKee (who made the modern horror classic “May”) and the late cult author Jack Ketchum that told the story of a feral woman (played by McIntosh) who is discovered in the woods by a sadistic lawyer who locks her up in his basement and sets about “civilizing” her with the help of his family—suffice it to say, it does not go well for them. Set several years later, “Darlin” opens with The Woman dropping off her equally feral teenaged companion Darlin’ (Lauryn Canny) at a Catholic hospital before disappearing back into the night. Although her wildness upon her arrival forces her to be sedated, she eventually calms down, gets cleaned up and, despite being unable to speak, befriends a gay nurse (Cooper Andrews) who feels sympathy for her and no small amount of contempt for the people running the hospital.

Speaking of, Darlin’s case attracts the attention of the Bishop (Bryan Batt), whose parish is in danger of being shut down for financial reasons. He hits upon the brilliant idea of taking Darlin’ from the hospital and putting her into a care facility where she will be transformed from a snarling beast into a prototypical good girl under the supervision of Sister Jennifer (Nora-Jane Noone) with all of it captured for posterity on video in order to help spur fundraising efforts. Although Sister Jennifer—a one-time reclamation project of the Bishop herself—is kind enough to Darlin’, it soon transpires that the Bishop has a couple of horrible secrets that he is maintaining behind his facade of righteousness. Then again, it turns out that Darlin’ has a couple of secrets of her own that are about to be revealed. One of them, of course, is The Woman, who has been searching for Darlin’ ever since she left the hospital and is perfectly willing to slaughter anyone who interferes with that hoped-for reunion.

As “Darlin’” goes on, it ping-pongs back and forth between moments of gruesome horror (gorehounds will no doubt be pleased with the carnage on display), off-beat humor ranging from the darkly satiric to the cheerfully goofy, sweetness involving Darlin’ and her friendship with her rebellious fellow student (Maddie Nichols) and great anger aimed directly at the Church and the myriad ways in which it has hurt the very people it is supposed to help. (It cannot be mere coincidence that one of the nuns is played by Noone, who previously appeared in the brutal “The Magdalene Sisters.”) The problem is not that the film keeps shifting tones throughout so much as the fact that it doesn’t quite know how to pull them off. A number of the scenes work as individual moments but McIntosh, who also wrote the screenplay, has not found the line that would bring them all together. As a result, the film, while well-made on a technical level, feels more like a collection of moments than instead of a satisfying narrative.

Not all of these moments work even on an individual level either. The stuff involving the depravations of the Bishop may have been conceived with the upmost sincerity and righteous fury but they have been executed with all the subtlety of a kick to the head. His character is presented here in such a cartoonishly evil manner that if the finale had found him attempting to tie Darlin’ to the nearest railroad tracks, it would not have seemed entirely out of character. There is also a group of homeless women that The Woman falls in with on her search for Darlin’ that are introduced with great fanfare and brought along for the big finale but who never actually do much of anything, certainly not enough to warrant their presence. These scenes are bad enough on their own but they become especially frustrating when they steal focus from what does actually work.

I have seen “Darlin’” twice now and I oddly found that I liked it a little better the second time around. Perhaps this is because I knew by that point that it was a mess from a tonal perspective and I could focus my attention more on the stuff that I did like about it. The performance by Lauryn Canny as Darlin’ is fascinating to watch as she moves from feral to vulnerable without ever letting you forget the danger that she represents no matter how “civilized” she may now appear. I also liked the supporting performances from Noone, Nichols and Andrews as the new people in Darlin’s life who genuinely seem to care for her. There are some big laughs scattered throughout as well as a few nasty enough to make you think twice about hitting the concession stand. I came away from a second viewing of “Darlin’” convinced that Polly McIntosh does indeed have what it takes to one day make a solidly entertaining and dramatically satisfying film, even if she hasn’t quite done that here. 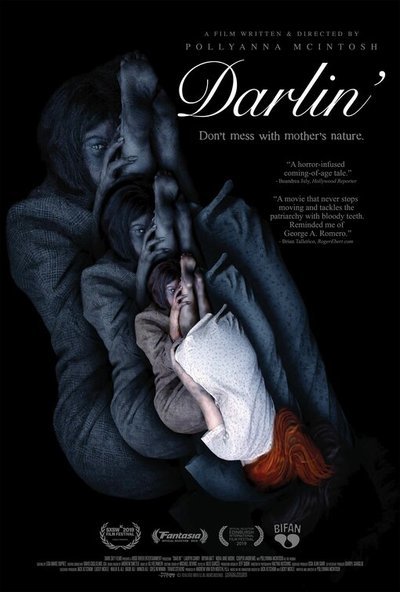 Bryan Batt as The Bishop

Pollyanna McIntosh as The Woman