This film is not an adaptation of the 2016 Jane Mayer book of the same name, although it deals with a similar topic. The documentary, directed by Kimberley Reed, was begun in 2011, and uses Montana as an object lesson in the abuses of political campaign finance laws, many of which were adversely affected (to say the least) by the Supreme Court’s 2010 ruling in the Citizen’s United v. Federal Election Committee case.

The movie begins with an invocation of the Anaconda Mining Company, headquartered in Butte, Montana, that had a not nominally inappropriate grip on Montana politics during its heyday, which began at the turn of the 19th century. Then a Montana legislator was by definition an Anaconda legislator, a situation leading to such corruption that Montana eventually adopted a group of laws that went beyond federal regulations curbing corporate influence in politics. In Montana, in 2011, the question is whether those regulations will hold in the wake of the Citizen’s United ruling. Reed covers a lot of ground, interviewing members of the U.S. Senate and many state legislature figures, bringing up the tradition of the “citizen legislator” that represents Montana politics at its most grounded and useful. (Among these figures is Senator Jon Tester, a Democrat and currently a figure whom President Trump is very interested in having unseated. The White House and its current occupant don’t figure much in the film.)

Another Montana feature, related to Anaconda, that’s brought up early in the movie, is the pool of a long abandoned copper mine, 50 billion gallons strong, filled with toxic chemicals. It’s a problem that no one has come up with a viable plan to clean up (and when Anaconda controlled the state’s politics, there was minimal concern with cleaning it up), and various figures in the movie predict it will be the site of an ecological disaster if nothing is done.

The movie’s default narrator is a young man named John Adams, an investigative reporter for the Great Falls Tribune, who begins by tracking the source of near-slanderous postcards going out in the mail days before elections, influencing gullible voters. One politician points out, with both indignation and mordant amusement, a piece of campaign literature that paints the politician as a friend of John Wayne Gacy’s. Not only is that not the case, but Gacy is from Illinois anyway.

The new uses of dark money, it is discovered, is rooted in Wisconsin Governor Scott Walker’s legislation designed to allow oodles of anonymous corporate dough into the process. Organizations with acronyms like WTP and ATP provide fronts for far-right operatives while Montana state legislator Art Wittich rails for a “purge” of moderate Republicans from the Senate.

Over the several years covered in this movie, Adams loses his Great Falls Tribune job, under circumstances that strongly suggest he was uncovering material that made its owners somehow uncomfortable. Adams founds a website and covers a story that provides a glimmer of hope in this very grim picture, one made even more grim when the predicted ecological disaster involving the toxic mine pool actually happens.

This is an informative film that deals up its facts in a sober, linear fashion. This is salutary in that it avoids sensationalism that might lead to accusations of conspiracy-theory mongering. But it also has the effect of making the film feel a little dry. After playing the Sundance Film Festival this year it was acquired by PBS. It’s not an insult to call this an exemplary PBS documentary; let’s just say you should make sure you are really in the MOOD for a PBS doc before you check out “Dark Money.” 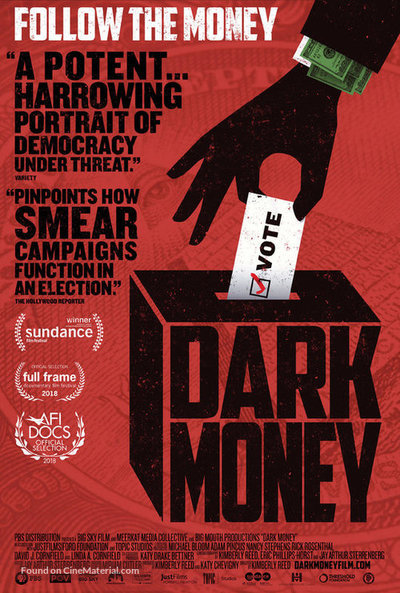