Horror movies about mental illness are always a dicey proposition since their creators generally seem to be more interested in special effects and emotional push-button responses than in either illustrating or deconstructing their unwell (and usually tortured) protagonists’ headspace. This unfortunately applies to the makers of “Daniel Isn’t Real,” a new horror movie about a college student who’s menaced by an imaginary friend from childhood.

To be fair, writer/director Adam Egypt Mortimer and co-writer Brian DeLeeuw’s microbudget psychodrama is compelling when the icky practical effects work of VFX supervisor George A. Loucas and creature designer Martin Astles are most prominent. But beyond these genuinely impressive practical effects, there’s not much to “Daniel Isn’t Real” beyond a cynical, generic coming-of-age story and a lot of unexamined second-hand ideas about creativity, empathy, and spirituality.

I left “Daniel Isn’t Real” without knowing much about Luke (Miles Robbins), a repressed college student who fights for control of his body and responsibility for his actions with Daniel (Patrick Schwarzenegger, son of Arnold), an imaginary friend who’s basically an art school version of Tyler Durden from “Fight Club” (ex: Daniel compares himself to the angels that William Blake claimed inspiration from).

The most interesting thing about Luke is his association of Daniel with his mentally ill mother Claire (Mary Stuart Masterson), a mentaly ill recluse who goes off of her prescription medication and is discovered by Luke, after a ten-minute introductory flashback to Daniel’s childhood, making collage art from book pages, which she pastes all over her cavernous house’s walls. Claire says that she sometimes receives messages through these pages; she also doesn’t seem to mind walking through broken glass, and often carries a big pair of scissors with her. DeLeeuw and Mortimer suggest, through dialogue spoken by Luke’s psychiatrist Dr. Cornelius Braun (Chukwudi Iwuji), that Claire’s inability to care for Luke has stunted his growth: “The mind reflects its environment” Braun tells Luke as they survey Claire’s home.

But before that: we spend a lot of time watching Luke become empowered and inevitably horrified by Daniel, a cartoonishly menacing alternate personality that Luke, at his mother’s request, locked up inside his grandmother’s Victorian dollhouse (no explanation is given for this early plot twist, so it just sort of sits there). Daniel, who is freed at the suggestion of Dr. Braun, predictably shoves Luke outside of his comfort zone by playing Cyrano (or maybe Buddy Love) for Luke when he tries to bond with/put some moves on Cassie (Sasha Lane), a volatile, but empathic young co-ed who’s basically a manic pixie art student (all roads lead back to art school).

Daniel’s transformation from a smooth creep to a dangerous body-snatcher is pretty been-there, done-that since Mortimer and DeLeeuw are more interested in Daniel’s ideas about God and creativity than Luke’s ideas about women, sex, and his mother. By now, Freudian notions of sexual trauma are outdated, even if they’re still light years ahead of the horror and artsploitation movie clichés that the makers of “Daniel Isn’t Real” present to viewers like a genre movie mood board. Mortimer cites, in a statement included in his movie’s press notes, a number of obvious sources of inspiration, including “Jacob’s Ladder,” “Requiem for a Dream,” and “Fight Club.” The most awkwardly corralled title in this group has to be “The Exorcist,” a horror movie whose period-specific concept of demonic possession is also obviously specific to its creators’ respective upbringings and eccentricities. Those inelegantly borrowed eccentricities, when magpied by younger, more contemporary artists, come across like cinephilic tics and received wisdom.

Being unoriginal is one thing, but being unoriginal and uninspired is another. True, Loucas and Astles deserve credit for contributing disturbing practical effects, but their work only tells me so much about what their characters are becoming, apart from some by-now-rote admiration for the surreal paintings of Hieronymous Bosch and Francis Bacon, the latter of which are a prominent influence on “Jacob’s Ladder.”

The best thing I can say about “Daniel Isn’t Real” is that it’s a promising early feature made by young artists who haven’t yet worked out how to express and/or synthesize what they like about their favorite artists and their work. It’s all style and very little substance, making Dr. Braun’s vague, unintelligible recommendations seem weirdly revealing: he says that he prefers exotic, non-“Western medicine” right before he produces a “Tibetan singing bowl” and an obsidian dagger. I guess Pazuzu and Father Karras weren’t available.

Dumb jokes aside: not every movie about mental illness needs to be profound, but there should be something more to “Daniel Isn’t Real” beyond the threat of harassment from a grinning, imaginary killer whose face occasionally melts into globs and spikes of flesh-shaped clay. But every time the movie’s seductive, disturbing images threatened to overwhelm me, Mortimer and DeLeeuw pulled me back to safety using exhaustive, shallow dialogue, and a hodge-podge of psychoanalysis and mysticism. I’m sure these guys have a great movie in them, but this isn’t it. 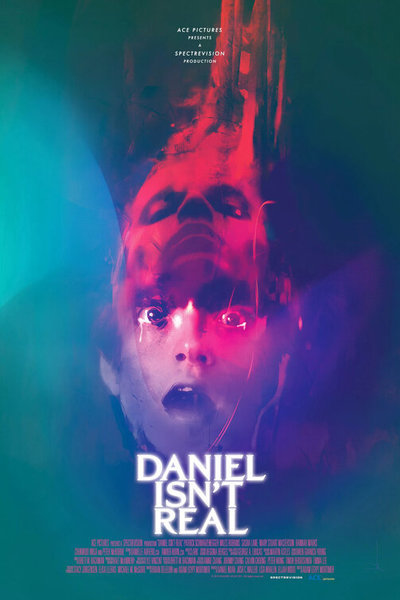