At a guess, I'd say the director of "Dangerously Close" devoted a great deal of time and thought to how his movie looked, and almost no time at all to what, or who, it was about. This is a technical exercise, a classroom film designed to show that the maker can manipulate the tools of his trade to his own satisfaction. It is arrogant in its indifference to the audience. There is no evidence that "Dangerously Close" was intended to communicate anything to anybody.

The movie takes place in a rich kids' high school, where there are lots of expensive cars in the parking lot and the teachers all seem to cultivate interesting personality disorders. Two of the kids stand out - one, because he is the school punk and therefore a nonconformist, and the other because he is the straight arrow who won't go along with the majority rule of the creeps. The school has been having problems with vandalism, we are told, and so a student group called the Sentinels has been founded to combat the vandals. The group has turned into a violent, neofascist private army that terrorizes the kids who don't fit in.

So far, we have a retread of "The Lords of Discipline." But the movie lacks any sense of narrative pacing, and its characters would not, if they were combined, add up to a single interesting person. The director, Albert Pyun, seems to be up to something other than storytelling. All of his students are improbably handsome. They don't hang around, they pose. The few females in the film are briefly seen and soon forgotten. There is a sinister older teacher who seems to be the leader of the Sentinels, and if "Dangerously Close" were honest, it would be about how this character has turned their youthful enthusiasms to his own sadomasochistic ends. But, of course, this movie lacks the courage to admit what it is really about.

So, we get lots of puzzling scenes that don't quite fit together.

Conversations in which the obvious is stated over and over again.

Puzzled observations about things that have been clear to the audience for an hour (could there be a viewer dumb enough to miss the possibility that the teacher is in on the plot?).

What always amazes me about movies like "Dangerously Close" is that they don't believe high school kids are young. The characters look and act like men in their 20s. The movie has a view of adolescence that is both stupid and irrelevant. Look at a movie like "Lucas," which remembers what it was really like to be 13 or 14 or 15, and then go look at "Dangerously Close," and you'll think you stumbled into a reunion of Calvin Klein underwear models. 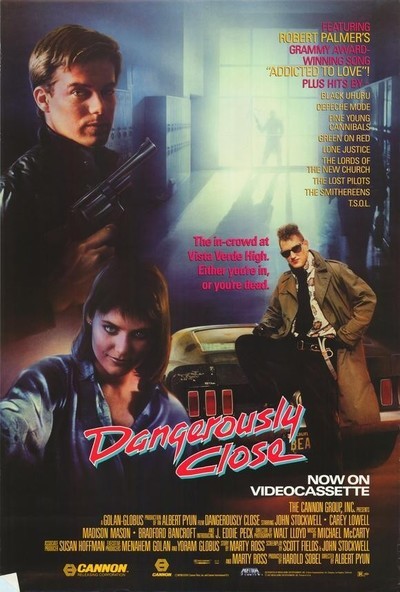