It takes some chutzpah to name your siege thriller “Dangerous,” and unfortunately, there’s not enough of it in the Scott Eastwood actioner of that name. Eastwood plays Dylan Forrester, a sociopathic parolee who, when he returns home to bury his younger brother Sean, must also dispatch a team of treasure-seeking mercenaries, led by officious baddy Cole (Kevin Durand, of course). And if that wasn’t enough, Dylan also has to convince his estranged family that he’s not as creepy as he seems. That last item takes some doing, since Dylan’s mom Linda (Brenda Bazinet) refers to Dylan as “that thing.”

To be fair, Dylan is a medically certified sociopath, with a well-foregrounded prescription for lithium pills and an ankle bracelet, too. Dylan’s also a murderer: he has a dedicated FBI Agent Shaughnessy (Famke Janssen) on his tail after he slips out of his ankle bracelet, and also warrants some fatherly concern from distracted, pseudo-sensitive psychiatrist Dr. Alderwood (Mel Gibson).

Dylan’s struggle to live with his split personality disorder is ultimately irrelevant to the plot of David Hackl's “Dangerous,” which follows Cole’s siege of Sean’s final resting place, a remote hotel on Guardian Island. As Dylan, Eastwood dispatches armed heavies in action scenes that are presented in over-edited, muddy/brown hand-held medium close-ups. He learns to uncritically accept himself for being a killer, but one of the good ones. There are a lot of weird and intriguing qualities to Dylan’s story, but very few of them pay off in a way that suggest he’s a force that must be reckoned with.

You can see the biggest disconnect between what “Dangerous” promises and what its creators deliver by contrasting character-driven scenes with Dr. Alderwood with by-the-numbers action stuff featuring Cole and his team of indistinct underlings. Alderwood is scatter-brained, unhappy, and drinks to excess, as is suggested by the heavy clink of ice in his whiskey. Alderwood generally seems disoriented and/or aloof, like when he asks Janssen’s self-described “special agent” if she “feels special.” He also often encourages Dylan to fall back on healthy coping strategies, like taking his prescribed depressants—which Dylan says “deaden my response to stimuli” and therefore “make me normal”—or doing breathing exercises.

Alderwood’s therapeutic methods hinder rather than help Dylan, as “Dangerous” tacitly suggests that medication and therapy only suppress rather than draw out your real personality. So Eastwood acts like a seething milquetoast through the first three-quarters of “Dangerous,” right until he gets permission from Alderwood to cut loose, grab a military-grade gun, and be himself. Sounds great, but Eastwood doesn’t look any more comfortable or commanding behind heavy artillery than he does while staring blankly at his mom.

Speaking of Linda: she doesn’t add much to Eastwood’s character beyond a general sense that something’s missing. Something important, too, seeing as how everybody walks on eggshells around Dylan, including sympathetic hotel employee Jo (Destiny Millns) and Dylan’s impressionable young nephew Freddie (Atlee Smallman). These supporting characters allot “Dangerous” its most distinguishing qualities, as they’re not hemmed by corny accents (looking at you, Foghorn Leghorn-heavy Chad Rook), lame bad guy taunts, or uninspired gunplay. Unfortunately, that’s not saying much given that “Dangerous” doesn’t share enough about Dylan’s past or his brother Sean.

Instead, we only get some hints of Dylan’s threatening potential. He’s initially defined by his tidy routine, shown in an equally fastidious montage: he returns to his nondescript apartment, takes medication, lifts weights, then repeats. This pattern is interrupted as soon as Dylan learns of Sean’s death and also disarms a stranger in his apartment. The SWAT team approach Dylan’s home in slow motion, and Janssen’s character discovers a bloodied (but alive!) heavy in Dylan’s shower. Could this be the handiwork of Dylan Forrester, the emotionless killer that Shaughnessy’s been chasing for some time, as she explains in a too-tight close-up in her car? Could be, though it’s hard to tell based on Dylan’s underwhelming fight scenes and even more underwhelming dialogue, like when he observes that “I’ve been hunted before. I can handle it.”

Eastwood makes one gesture that suggests that there could have been something to “Dangerous,” and it goes beyond all the generic paternal hissing that he’s clearly inherited (or wants us to think he’s inherited) from his dad. In this scene, Dylan helps Sean’s archaeologist buddy Massey (Brendan Fletcher) by pumping Massey’s shotgun for him. Massey is a bit of a drunk, and therefore useless in the fight, so it’s up to Dylan to help him locate his inner alpha. Eastwood rises to the occasion, and for one brief, charged moment, Dylan seems to have an inner life beyond tough guy preening. That moment passes swiftly, but it’s enough to make you want to root for Eastwood, and hope that one day, he, too, will be able to coast on sheer chutzpah alone. 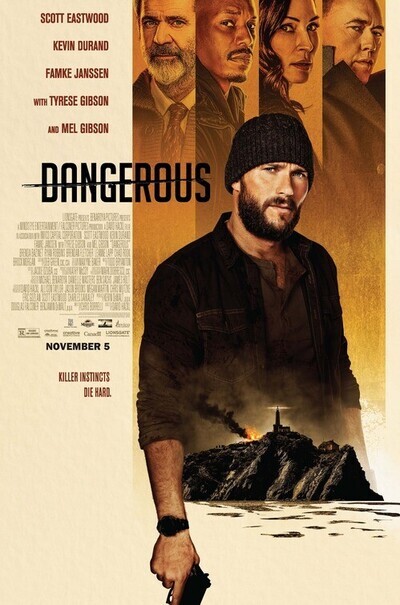