Watching a midnight movie at home during the day while sober is like riding a bicycle through a river of molasses. It’s not much fun, and you’re bound to sink quickly into the malaise of tedium, wondering what all the fuss is about. Without a rowdy, inebriated crowd hurling their own MST3K-style commentary at the screen, these inept curiosities can become an awful chore. Yet this is, in fact, the best way to view them with critical objectivity.

The only “so-bad-it’s-good” film I’ve seen that has not only proven watchable but thoroughly entertaining on repeat viewings (without a sold-out crowd accompanying it) is Tommy Wiseau’s 2003 cult sensation, “The Room.” It’s the funniest comedy ever accidentally made, fueled by a lead performance from writer/director Wiseau that is literally unlike anything ever put on film. His consistently unpredictable handling of language and complete emotional detachment cause him to resemble an alien fumbling in its attempts to replicate human behavior. Consider a scene where he thanks his “future wife” Lisa for throwing him a birthday party. “You invited all my friends,” he gushes. “Good thinking!” Above all, it is the sincerity with which Wiseau constructed his tragic melodrama that makes it not only hilarious but oddly endearing, and his subsequent attempt to be purposely funny (Hulu’s disastrous sitcom, “The Neighbors”) proves that he is not in on the joke.

Anyone who has attended an Alamo Drafthouse screening of “The Room” can understand why Drafthouse Films has begun to distribute bad movies crafted by would-be artists as passionate as they are untalented. They’re clearly searching for the next Wiseau, which is sort of like searching for the next Andy Kaufman or the next Stonehenge. Enter John S. Rad, an Iranian filmmaker who set out to make an American crime drama entitled “Dangerous Men” in 1979. Somehow, the project remained uncompleted until 2005, when it received a blink-and-you’ll-miss-it release. Ten years later, the film had a surprise screening at Fantastic Fest, and the audience ate it up. Whether or not moviegoers across the country will respond to it with equal enthusiasm has yet to be seen. Seen all by itself, the film is dull and repellant trash with only a handful of laugh-out-loud moments. It’s no funnier than “Birdemic: Shock and Terror,” James Nguyen’s micro-budget Hitchcock riff, which worked much better as a two-minute trailer than a full-length feature.

Right off the bat, it’s clear that Rad is the singular visionary behind this picture. The opening credits consist entirely of his name, accompanied by various titles (he apparently served as producer and executive producer). He’s also responsible for the film’s abominable synth score, including a main theme so monotonous, it gives Torgo’s theme from “Manos: Hands of Fate” a run—or perhaps, a hobble—for its money. So incoherent are the film’s jumbled plot lines that Rad never bothers to follow any of them toward a satisfactory conclusion. The primary story thread involves Mina (Melody Wiggins), a woman whose fiancé is knifed to death by one of the film’s numerous evil bikers. Rather than sob over her lover’s bloody corpse, Mina snaps on the persona of a temptress, luring the smitten killer to his inevitable demise in a seedy motel room. A line destined to be among the film’s most quoted occurs when Mina instructs the biker to rub her knees while licking her bellybutton—an unusual method of foreplay, to say the least.

Nearly all the men in Rad’s film, aside from the obvious heroes, are rapists at heart, a fact that becomes quickly apparent after Mina murders the biker and hitches a ride from a mustached family man. “She’s god’s gift to a hen-pecked husband!” he declares, before pressuring Mina into having sex. Instead, she holds his genitals at knifepoint, kicks him out of the car, forces him to disrobe, and leaves him stranded in the middle of nowhere. Rad’s inexplicable decision to continue cutting back to the naked man, wandering around in bewildered embarrassment, results in some of the film’s most memorably bizarre moments. Fretting like a neurotic comic relief, the man chastises his penis, exclaiming, “It’s your own bloody fault! I should’ve let her cut you off!” Eventually, he surmises, “There’s nothing to do out here—but dance.” And dance he does, all the while singing the melody from Strauss’s "Blue Danube" waltz. If anything, it’s the most pleasurable instance of music in the film.

Meanwhile, Mina morphs into a regular Aileen Wuornos, posing as a prostitute in order to kill as many men as possible. Her fiancé’s brother, a cop named Clem, wants to bring all the evil bikers to justice, though his police chief orders him not to get involved. “What do you want me to do? Sit on my thumbs and wiggle my toes?” Clem whines, creating a mental image stranger than anything in this movie. The chief should’ve known that Clem wouldn’t follow orders, considering that the actor playing the chief is clearly reading directly from the highlighted script pages on his desk. Anyway, it’s not long before Clem is saving busty women from motorcycle-wielding predators, while grilling a bartender about the bikers’ criminal overlord, Black Pepper, a bandana-clad doofus who has allegedly killed “more men than the ‘Nam war.” When Clem gives his name to the bartender, the man responds, “Right, I think I’ll call you Cling Cuckoo.” Right.

This is all much more fun to write about than it is to watch. Bad acting, bad writing, bad directing, bad music, bad sound and bad fight choreography can only take a film so far. A film must be entertaining on its own terms in order to be worth recommending, and “Dangerous Men” is, for the most part, a bore. That won’t stop midnight audiences from loving every frame of this moldy cheese-fest, but as Tommy Wiseau so indelibly noted, “Love is blind.” 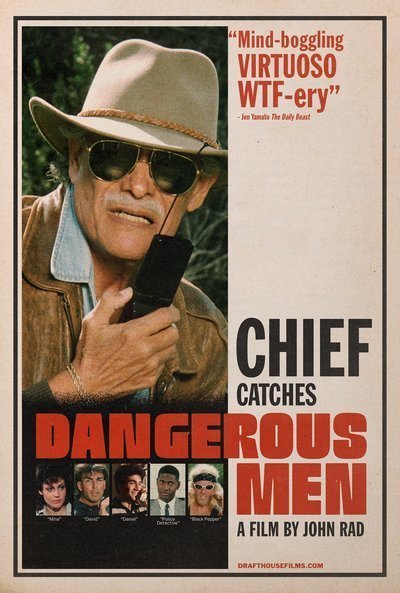