One of the many important details we learn in Stephen Maing’s essential documentary “Crime + Punishment” is that the New York City Police Department has become a model for many other police departments across the United States. The NYPD is the largest police organization in America, so the precedents it sets are seen by other municipalities as expertise that should be followed. Perhaps the more controversial item on the NYPD agenda is a “broken windows” policy that allows officers to stop and frisk people that “fit the description” of a suspect under investigation. Several studies indicated that most of the people who were stopped were disproportionately Black or Latinx. This appeared to be the rule rather than the exception, or rather, “a feature, not a bug” in a system that relied on a specific number of summonses and arrests every month. Considering this particular environment is being replicated by other law enforcement departments, Maing’s film becomes crucial to the discussion on quotas and the toll they take on the populace and the police.

It’s rather amazing how much access Maing gets to the NYPD. In footage shot between 2014 and 2017, he captures two academy commencement exercises, plays numerous recordings of employee review meetings and always seems to have his camera in the right place at the right time while observing his subjects at work. Maing also finds several regular citizens who are willing to speak on camera about their NYPD experiences. Their recounting of arrests is especially harrowing. But to be clear, this isn’t an anti-police documentary; it’s an anti-corruption documentary. The primary subjects of this film are Black and Latinx police officers who are suing the NYPD over the quotas in the stop-and-frisk program. We are told that quotas have not been implemented since 2010, but as the film progresses, we learn that not only is this untrue, but that they exist under a different, more politically correct-sounding name.

“Crime + Punishment” follows two main stories: the lawsuit and a separate court case involving Jessica Perez’s son, Pedro Hernandez, who has been imprisoned in Rikers Island over a year for a crime he did not commit. Both stories feature Manuel Gomez, an ex-NYPD officer turned private investigator. Gomez is the kind of larger-than-life New York City character that every actor in Hollywood wants to play. He’s no-nonsense but not without a genial sense of humor. He’s completely devoted to his quest for justice and reform, and his knowledge of the police force and the court system helps us understand what’s going on throughout the movie.

Hernandez reaches out to him for advice, as assisting victims of stop-and-frisk arrests is one of Gomez’s missions. Hernandez had been stopped 25 times by cops, resulting in summonses that the film depicts as primarily useless from a crime-fighting standpoint. This relentless ticketing is instead part of a hustle designed to get an officer’s numbers up so the department can commend them—the officer who constantly ticketed Hernandez had been promoted for doing three times the required number of stop-and-frisks. Yet more often than not, summonses resulting from these interactions are later dismissed.

However, these summonses can then be used as a means of suspicion so that the officer can stop the same person in order to dispense another ticket or make an arrest. People who are ticketed then have to deal with either paying the fine or going to court to fight it. Considering that the average target for stop-and-frisk is Black and brown people between the ages of 14-21 (we hear a superior officer actually saying this in a secretly recorded conversation), this becomes a vicious cycle that leads to community distrust at best and, at worst, to the death of someone like Eric Garner.

Gomez’s vast collection of information about falsified arrests and his own firsthand knowledge of the quota system will prove useful to the NYPD12, the officers who are part of the lawsuit that opens “Crime + Punishment.” Of this group, we first encounter 12-year veteran Sandy Hernandez, a cop who is being punished for not keeping his quota numbers up. Maing’s camera watches him as he is forced to stand on a corner doing absolutely nothing for eight hours. If he violates this, he will be written up by his superior. His superior shows up at one point, and since Sandy Hernandez is wired, we can hear the superior threaten discipline for a nonsensical uniform infraction. These types of microaggressions, and the occasional outright aggression against an officer during a review, are the ways of retaliation guaranteed if an officer refuses to treat the people he’s protecting and serving as merely a number.

We also meet Edwin Raymond, whose secret recordings of his superior officer’s comments greatly help the NYPD12’s case. Raymond had been repeatedly passed over for promotion due to his unwillingness to juice up his arrest numbers. Throughout “Crime + Punishment” he’s one of the main spokespeople for his group. We follow him through failures and one major success; the latter results in a genuinely moving moment tinged with anger. Like the other members of the NYPD12, Raymond is an active member of the force while the lawsuit is transpiring. These officers come off as public servants who really do want to support their community and foster a sense of trust between them and a public who looks like them. Cops are the heroes and the villains of this piece.

Serving as his own cinematographer and editor, Maing pieces together some indelible footage to make a documentary that flows naturally and cinematically. This is a fly-on-the-wall series of chapters based on a timeframe, each one opening with a gorgeous drone shot of New York City before taking us to ground level for the latest burst of information. As a tale of blue wall corruption, it thrillingly evokes Sidney Lumet’s “Serpico” right until the moment it presents Frank Serpico himself. Despite Maing’s complete even-handedness in depicting the elements of his documentary, one can’t help but notice that, outside of Serpico, there isn’t a single other White cop who shows solidarity with the NYPD12. Maing is careful to point out that this same system affects them as well, and I’m quite willing to believe there were White cops who were sick of hunting for people to arrest. None show up. What was the deal here?

It’s the one question I wish I had asked Raymond, Gomez and Maing when I spoke with them after this film screened last month. RogerEbert.com contributor Steven Boone and I conducted our own little mini-interviews, and one of the things I took from my time with the officers was a comment by Raymond, who told me that there were plenty of measurements for enforcement in the NYPD but none for service. Anyone who has a merit-based job would immediately understand that, if your job and your promotions depended on measuring your use of force rather than your ability to diffuse a situation without it, it’s very likely you’d lean toward a constant use of force.

The other thing I took from my post-film conversations was Manuel Gomez’s continued fight for an independent organization that looked into police misconduct and complaints. Gomez believed that this documentary would make a great case for this cause. I must agree; “Crime + Punishment” is that rare kind of important documentary that’s compelling enough to possibly enact change. Most people will probably watch it on Hulu, but it's getting a theatrical release and is cinematic enough for a trip to anywhere that’s projecting it. 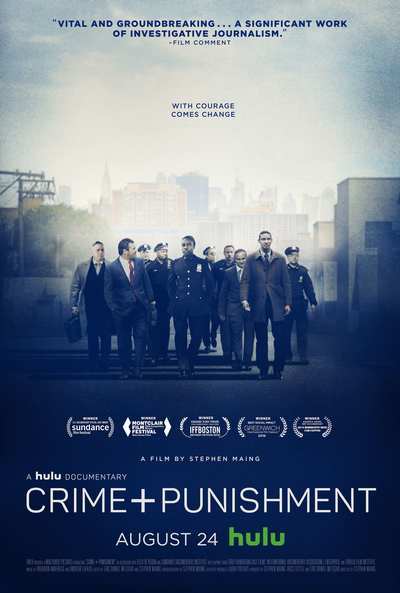