Patrick Brice’s “Corporate Animals” is one of those comedies that never moves beyond its premise. It starts and ends with a company retreat that goes horribly awry. The only difference from the start of the movie to its credits is that this motley crew of misfits learns to stand up to their nightmare boss. So, imagine “Office Space” with forgettable characters and nothing to say about this next bleak phase of the business world.

Their boss, Lucy (Demi Moore), is a deranged Michael Scott-type boss, a cringe-inducing persona who claims remote Native American heritage and shortchanges her employees on everything from crediting them for their ideas to supply rations. It’s her pushy decision to throw her ill-equipped team into a dangerous cave for the sake of team building. Of course, this improvised deviation from their course leads to only more trouble when an earthquake traps them in the cave and kills their guide, Brandon (Ed Helms). The ridiculous situation sets up a number of jokes, but they’re only occasionally funny.

Sam Bain’s thin script aspires to be a satire about tech startup culture and the silly ethos that would inspire a manager to throw their company into a reckless venture — both in the personnel and financial sense — but never goes beyond blaming Lucy for the team’s problems. While frivolous pop culture references abound, the movie never gives any insight into the corporate culture it’s skewering. Lucy’s cruelty sometimes ends up the punchline but it’s not always well handled. For instance, when it’s revealed that Lucy has been sleeping with one of her employees since he was an intern, there are a few Weinstein jokes at her expense and the movie moves on. It’s like a name drop and done, like a half-hearted line from a “Family Guy” episode. The jokes made about the Incredible Edible Cutlery Company, its less successful expansion into education and impending implosion feel similarly shallow. It’s a shame because startup culture can be fertile ground for comedy as we have seen on the show “Silicon Valley” or the scathing workplace movie, “Office Space.”

In this case, the sole appeal of “Corporate Animals” comes from its cast. Moore brings a chaotic, irresponsible energy to her team as their selfish leader. Even when things are going well, she’s the most likely culprit to throw a wrench in the group’s plans of escape. The more sane employees of this soon-to-fail company are played by an ensemble cast of comedians that include Jessica Williams, Karan Soni, Nasim Pedrad, Dan Bakkedahl, Martha Kelly, Isiah Whitlock Jr. Calum Worthy and Jennifer Kim. Despite their best efforts, there’s not much life to breathe into this aimless script, but their on-screen camaraderie is often the only thing that help these jokes land.

There have and will be sharp critiques of garbage corporate culture. “Corporate Animals” just isn't among them. It’s a miserable time in poor company, watching pretty funny actors trade pretty unfunny lines about cannibalism and an abusive lady boss. There are some moments of gross body humor, a drug-induced dream sequence and a terribly unamusing conclusion to this whole enterprise. “Corporate Animals” feels just like the team-building exercises it spoofs, something that should have been shorter and far less tedious in practice. 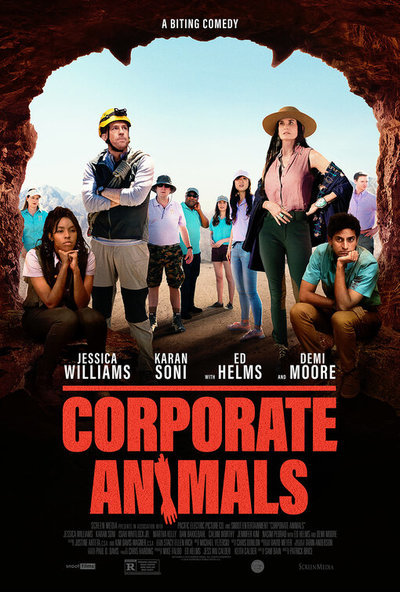