“Contract to Kill” made me miss the old Steven Seagal, the one who used to stab Oscar-winning actors in the head with gigantic knives and gouge out the eyes of racially stereotyped practitioners of voodoo. The slim, ponytailed and humorless Aikido master who hyper-violently plowed through legions of hapless minions en route to their Big Boss figure. The guy who once directed a film where a two-time Oscar winner had a massive verbal freak-out offscreen so the director could shoot another close-up of himself. At the end of that film, the director gave a long speech about the environment after blowing up an oil rig and polluting the ocean. That’s the Steven Seagal I miss. He was fun.

The current incarnation of Seagal is no fun at all. Sure, his movie titles remain as committed to the three-word format as Robert Ludlum novels, but that’s the only thing that hasn’t changed. If you haven’t been checking in with Seagal’s numerous direct-to-video efforts over the past decade, his physical appearance in “Contract to Kill” may come as a surprise: He’s turned into Paul Masson wine commercial-era Orson Welles. This added girth forces the editor to make some unusual choices during fight scenes, because it’s clear Seagal is no longer limber enough to whip all the ass that’s flung at him. As a result, “Contract to Kill” looks edited by a seeing-eye dog using a Cuisinart; you can’t tell who’s doing what to whom in Seagal’s action scenes. If ever there were a brilliant reason to employ CGI, this is it. Instead, we’re stuck with a mess of flailing limbs that don’t appear to belong to the body that’s swinging them.

If Seagal has truly gone “Full Orson,” “Contract to Kill” is his “Chimes at Midnight.” Writer/director Keoni Waxman’s script is so heavy with exposition that it plays like the movie’s Wikipedia page. Seagal is saddled with explaining every single thing to the viewer. He talks SLOWLY, and most of what he says is plum terrible. For example, an early jailhouse interrogation scene turns into a five-minute dissertation on how Seagal’s John Harmon figured out the criminal’s modus operandi. It somehow involves Mexican drug lords, Arab terrorists and a plane that was blown up by a bomb. The awfully rendered exploding plane F/X must have cost good money, because “Contract to Kill” repeats the tasteless effect four separate times. As cute little kids play soccer, body parts suddenly rain down on them from the sky.

A retired “mechanic” who has worked on both sides of the law, Harmon is called back into service by the C.I.A. He equates his assignment with “a monkey trying to f--k a football,” an analogy I am most definitely stealing. In layman’s terms, however, the job is to perform an assassination, but the identity of the target keeps switching. Assisting him is Matthew Sharp (Russell Wong). Sharp is an ace with a drone, which means Wong spends most of the movie looking at a hand-held screen. One of his drones features a working automatic weapon, which should give Amazon Prime ideas on how to handle complaining customers. Sharp proves to be really lousy with surveillance, though; the villain Jose Rivera (Mircea Drambareanu) immediately sees Sharp’s drone spying on him.

Also assisting Harmon is Zara Hayek (Jemma Dallender). Her job is to do what attractive women have been doing in this genre for decades: She takes off her clothes, has a poorly edited, topless sex scene with Harmon, and, despite being able to throw a punch that begins and ends with her still on-screen, is reduced to being a damsel in distress. The cynic in me noticed that, though she’s far smaller than Seagal, the bad guys manage to violently connect with her a hell of a lot more than they do him. On the plus side, Hayek gets to rock a red dress that’s so ratchet it inspired pleasant memories of the one Irene Cara wore in “Sparkle.”

Harmon does a much better job of explaining the inane plot to you than I can, so you’ll have to see the movie if you want more information. But one of his better lines will serve as a valid summary. Harmon tells Hayek, “We interview some people. If we like ‘em, we give ‘em a box of chocolates. If we don’t, we kill ‘em.” Nobody gets a box of chocolates, by the way. 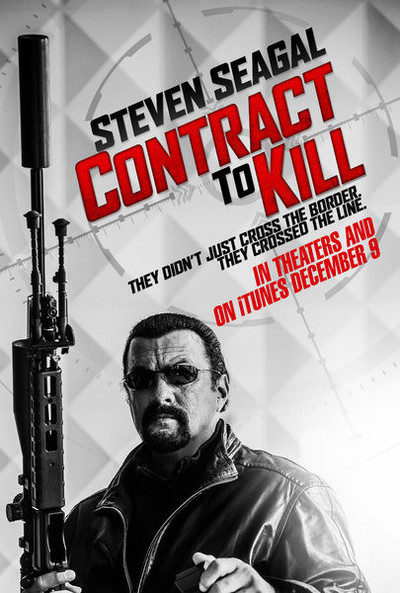