Chris Sullivan's “Consuming Spirits” is a slice-of-life film like you have not seen. It is the story of people in a small ordinary town, knowing nothing but their ordinary affairs, revealing their sins and crimes with an ordinary negligence. More than that, it is an animated film loaded with faded, despairing colors. Filmed over ten years, it features multiple techniques, including drawings, collages, models, and stop-motion.

At times, the images are flat, invoking vivid curiosity. At times, they take us through haunting three-dimensional scenes filled with wrinkles and crevices where youth once sprang. It's all part of the evocative, depressing portrayal of a decaying village whose prime resides only in the faint memories of its fading elders.

This is Magguson. It is the opposite of television's Mayberry. In Mayberry, they whistle; in Magguson, they groan. The town is built around a factory of large diagonal pipes belching out caustic smoke. The American landscape is peppered with such factory centers, manufacturing the household wares for the world. Once, such towns were the symbols of growth and optimism. Now they are clanking rust centers, waiting to for abandonment.

The voice of Magguson's conscience is the radio host Earl Grey (voiced by Robert Levy). He runs a call-in talk show, answering questions about almost anything, from life to planting, though he tends to shift conversations toward pornography. His grandfatherly voice provides a comfort for the town's inhabitants. That is, until he confesses to a horrible crime of depravity. His revelation does not provide a sense of relief, as though he had been holding this secret within him, waiting to free himself from the burden of guilt. Rather, he confesses almost as a way of seeking attention. This is a town of listeners disconnected from each other, burdened not by memories of vile misconduct as much by the distance of loneliness.

Magnusson sits among empty trees, worn parkways, and withered residences. While Mayberry's humble denizens knew one another and managed to cling to hope for sunshine in their days, life has beaten down the populace of Magusson. People seem to remain for an eternity, remaining anonymous to one another, hiding beneath a cloudy sky. The mundane passage of time has replaced those dreams of business suits, colorful farmhouses and luxurious lifestyles with daily routines masking crimes of conscience and violence. This is a world surviving past its termination date.

And, what do we make of Gentian Violet (voiced by Nancy Andrews), who drives along one of the many dark roads paying no attention to whoever might be scurrying along? Violet hits a woman, finds some expired first aid materials, treats her, buries her under some branches, and leaves. Again we find ourselves anxious, haunted by her impassive nonchalance. Perhaps any of us would be more troubled if, while driving through the country, we hit a possum or squirrel. Yet here we witness a driver casually barrel over a woman -- and not just any woman, but a nun running from a convent that doubles as an insane asylum. And our driver abandons her just as casually as she found her. Though the nun speaks very little –- if at all -- in the film, her own thread seems to bind all the disparate narratives. She is a victim of every single character's mischief. Strangely, it is not only the town that links these people together, but also their crimes against this woman.

This film fills us with that somber despair of intoxication. “Consuming Spirits” speaks on the one hand of a world where people live as shells going through habitual motions, as though they were ghosts in a ghostly land. On the other hand, they replace that emptiness by consuming cheap liquor. It feels like we are witnessing people at the end of their lives. But as gloomy as this film is, we are not. No, these are people moving along in suspended animation, as though time has long since taken its toll on their world. We recall Robert Altman's “Come back to the Five and Dime, Jimmy Dean Jimmy Dean,” watching small people in a small hamlet, ignored by the universe, yet managing to live in some sort of frozen, cobweb-infested imagination.

It is easy to read this film as an allegory for post-1950s America. Our happy mid-century days of post WWII victory and prosperity, featuring new televisions with new shows about the quirky-but-ordinary lives of the Cleavers, Nelsons, and Taylors who lived on clean streets in wide-open suburbs -- that's long gone. Now, we live among the shattered remains of those forgotten dreams, stuck in meaningless despair in which life feels like a broken record, repeating itself each day. That is the feeling we get from these stories. More than that, the animation itself, feeling homemade yet precisely calculated, carries us through this unhappy world -- one that might be stuck behind the trees, out past the last exit of the long lost highway. We know it is there, but we don't want to think about it. Yet once we start watching, it's hard to stop. 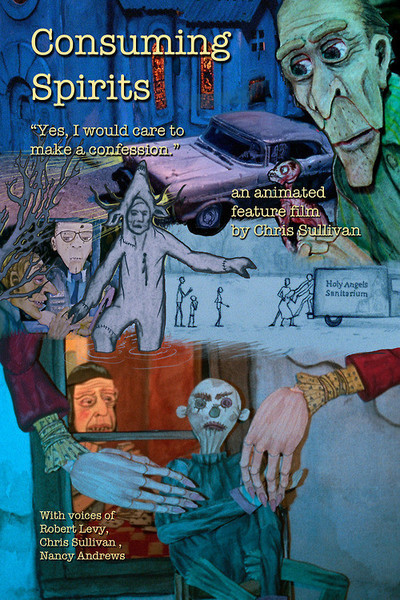