A broken system allowed Sam Little to become one of the most prolific serial killers in history. As his story unfolded, as many as 93 victims came to light, and there could even be more. He was an absolute monster who saw female lives as disposable, and he’s the subject of the latest in the true crime series craze, “Confronting a Serial Killer,” premiering on Starz this Sunday. A true crime legend, director Joe Berlinger, helmed this five-part series that too often succumbs to overheated writing and presentation. But "Confronting a Serial Killer" gets to the core of a true tragedy in this country, which is how victims are judged even in death, and how predators take advantage of a system that doesn’t support the people who need protection the most.

It's interesting that “Confronting a Serial Killer” isn’t really about Sam Little as much as it’s about author Jillian Lauren, and the justice she’s seeking for Little’s victims. Lauren was crafting a book about Little when she made contact with the imprisoned murderer, and the two formed a bond that’s not unlike Clarice Starling and Hannibal Lecter in “The Silence of the Lambs” in its quid pro quo structure. Revealed via phone calls recorded for the book and now series, Little is a disturbing presence. He develops an affection for Lauren, who knows how to get him to open up, and whose family suffered an emotional toll from her taking on this project. Some of the scenes in which she breaks down at the horrors that Little reveals are heartbreaking. It's a courageous project for her to have even considered.

True crime series often center the villain, but Berlinger smartly centers Lauren, survivors of Little’s rage, and the family members of his victims. Little becomes an awful supporting character in his own story, one that reveals the flaws in a legal system that let him continue to kill. Episode after episode details incompetent police work and a structure that basically allows people of a certain race and class to be murdered. Berlinger has been examining the broken justice system for years, really changing the game with “Paradise Lost,” and “Confronting a Serial Killer” is at its best when it shines a light on how people like Sam Little get away with unimaginable crimes that are more likely to turn the other way when a woman dies, especially if that woman is a person of color and a sex worker.

It also shines a light on how easy it was to get away with murder before DNA changed the criminal justice system. When the technology started to develop in the ‘80s, there were literally thousands of unsolved murders in Los Angeles, and a large portion of them were of sex workers. It became increasingly clear there were multiple serial killers prowling the city of angels, and one of the most notorious was Sam Little, a man who was eventually convicted of killing three people but almost certainly killed many, many more. In fact, investigators have reason to believe that that he took more lives than Bundy, Gacy, and Dahmer combined.

Lauren makes for a unique narrator given that she has a background in sex work and has trauma related to a violent past, including an attempt on her life when she was 20. Her courage in telling her story shouldn’t be understated, but it does gets repetitive in the context of a five-episode series as she hits some of the same melodramatic beats again and again. It’s not the inherent value of her story that a critic could possibly question but the writing in her telling of it. There’s a lot of heated exchanges that often sound too scripted like “I want to know why. WHY?! Why and how?!!?”

That overwrought aspect works its way into the production values too. The series has a surprising, disappointing tabloid-like style at times, as when Little's words are tastelessly splashed over images of a graveyard like the one in which he killed a woman. It’s almost as if the filmmakers knew there was a very strong feature film-length version of this story they could have told, and they fell back on cheaper filmmaking techniques to spread that out over five hours of television. None of this is a criticism of how seriously these crimes should be taken, especially given how often crimes against non-white women are swept under the rug, but the melodramatic-verging-on-exploitative presentation doesn’t help that cause as much as it could with a more refined production.

‘Confronting’ is the key word in the title of this production. In the second episode, a survivor literally confronts the prosecutor who negotiated a plea deal and didn’t consult with the victim nearly enough, according to her—she didn’t even know about a hung jury or a second trial. The author confronts her traumatic past and, in a sense, is the only one who can confront Sam Little directly. And it asks us to confront how this society allows the murders of unnamed Black females to simply go into file drawers, eventually to be joined by another one. 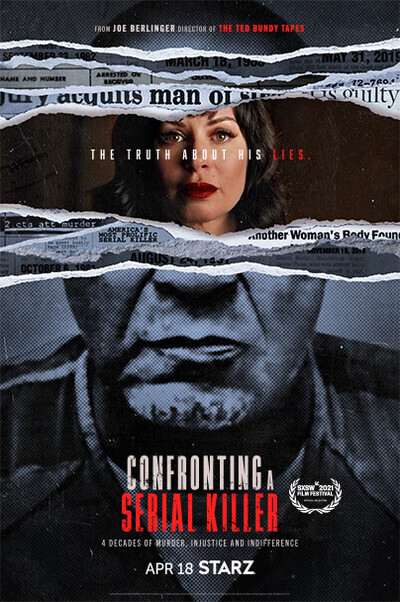