Alexander Nanau's "Collective" has a propulsive energy, relentlessly building in urgency and outrage. It's is a portrait of corruption so total that oftentimes the participants onscreen look at one another helplessly, like: "How can we even combat this? Where do we even start?" One of the distinguishing characteristics of "Collective" is the absence of "talking heads" and experts speaking direct to camera, so common in most documentaries. This absence works on multiple levels. It thrusts the viewer into the middle of the cataclysmic series of events as they unfold, giving "Collective" a palpable immediacy. But on a deeper thematic level: the political environment of Romania is so corrupt that a "talking head," anyone speaking in any official capacity with the weight of "expertise" behind them, is automatically suspect. They are lying. They are covering something up. They are not to be trusted. "Collective" is the story of a small band of people—journalists, activists, victims and advocates—who understand this better than most.

It all began on October 30, 2015 at the popular Bucharest nightclub Colectiv. Goodbye to Gravity, a metalcore band, ended their set with a small pyrotechnics show, which very quickly leapt to the backstage walls, before igniting the ceiling. The entire club was engulfed within seconds, captured on a horrifying cell phone video. Mass pandemonium ensued (the club had no fire exits). Twenty-seven people were killed that night, and 180 injured. Thirty-seven burn victims died in the hospital over the following months, not from their burns, but from infections acquired while in the hospital. Statements from government officials were given in Orwellian "newspeak": "At present, all medical needs are being met." The public was reassured that there was no reason to transfer patients to Germany, with its state-of-the-art burn trauma centers. The Health department doubled-down on the lie that the victims were being well taken care of. Romanians took to the streets in protests, so vehement and sustained that it led to the fall of the entire government. After the Prime Minister resigned, a new government was installed, and given a one-year mandate to untangle the web of what went wrong. But how can a system investigate itself if the system itself is rotten? "Collective" documents this thorny difficult process. Nauna was in on it from the ground-up.

Journalist Catalin Tolontan, editor-in-chief of the sports daily Gazeta Sporturilor, is a key figure. Seen early on at a briefing given by the Minister of Health, where the lies and platitudes from the podium are so obvious they almost create their own atmosphere, Tolontan and his skeleton crew of journalists cover the story. What at first seems to be a classic story of government incompetence is revealed as something far more sinister. The journalists discover that the disinfectants provided to the hospitals by a pharmaceutical company have been diluted, rendering them useless. This revelation is front-page news for months as this small team of journalists track down the who, what, why of it all. If disinfectants are diluted, then that means no Romanian is safe in the hospital. There is much resistance to Tolontan's reporting. A hostile talk show host has Tolontan on to discuss the case, saying to him, aggressively: "All you write about the healthcare system is terrifying. What is your goal?" Look at the Orwellian phraseology, how it positions Tolontan as an irritant, a problem. Tolontan keeps his cool, saying: "We have blindly trusted the authorities. Myself included, as a journalist. When the press bows down to the authorities, the authorities will mistreat the citizens." Nicolae Ceaușescu is never mentioned, but his presence is still felt, as is the memory of living under that totalitarian regime, the most stifling in all of Eastern Europe.

The diluted disinfectants are just the beginning. "Collective" is amazingly fluid, and the narrative keeps shifting, when the focus moves on to the next target: from the pharmaceutical company to the "accredited" labs to the mafia-like caste of "hospital managers" ... the entire system is rotten. The whole thing is run on bribes. Even patients are in on it. "Collective" is a great movie about how a free and independent press holds power to account, and calls out hypocrisy and venality. It's illuminating that a sports daily would head up this investigation, and not a mainstream news outlet.

One of the most fascinating shifts comes with the arrival of the interim Minister of Health, a young self-effacing man named Vlad Voiculescu. He brings to the table his background as a patients' rights advocate. He is not aligned to power, or to the system he represents and works for. He is on the side of patients and victims. He is so mild-mannered it takes a while to realize how formidable he is. He is not afraid to look the truth in the eye, to name truth as truth. He does not accept or protect the status quo. All must be interrogated and, if possible, reformed. He experiences institutional resistance every step of the way. In his first press conference, Voiculescu is so awkward and seemingly nervous he forgets to say his last name to the journalists gathered. (The journalists jokingly refer to him thereafter as "Minister-I-Am-Vlad.") But his quiet awkwardness is preferable to the slick bureaucratic ooze coming from every single other government official.

"Collective" is devastating in its accumulation of detail, and in its acknowledgement of the ongoing human cost. It provides no comforting lesson, and no triumphant Epilogue. The film is a reminder that systems refuse to change on their own. Maybe a couple of people will get fired, and they'll be labeled "bad apples" ... but the system itself remains untouched because too many people involved benefit from it. Nauna, who shot the film himself, has been given incredible access, first via Torontan and then Voiculescu, to the intimate wranglings of the people courageous enough to ask the tough questions, to demand solutions. Dissident Polish poet Czesław Miłosz said in his Nobel Prize acceptance speech: "In a room where people unanimously maintain a conspiracy of silence, one word of truth sounds like a pistol shot.” That's what Tolontan's voice sounds like. That's what Minister-I-Am-Vlad's voice sounds like. That's what "Collective" is. A pistol shot of truth. 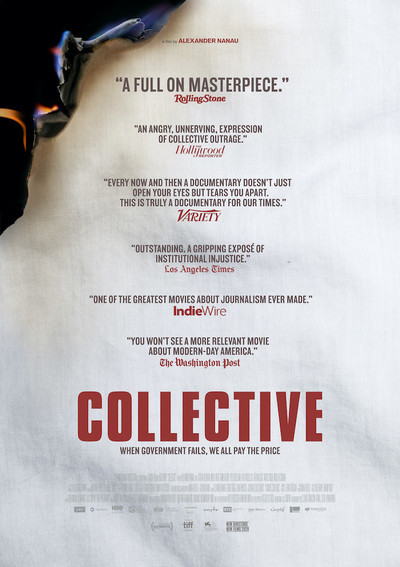