It is inevitable when asking questions of others, you find yourself reflecting on what your own answers might be. Maybe not all reporters or journalists feel this way, but sometimes, when I’m interviewing someone, I have to stop myself from giving an answer while asking a question to avoid accidentally leading the person I’m talking with to follow my own thoughts. In Mike Mills’ effortlessly charming “C’mon C’mon,” Johnny (Joaquin Phoenix) is an audio producer asking countless kids their thoughts about the future and their communities. Some are fearful, some are hopeful, some want the world to get along, others just want the world to see them as they are. It’s to put viewers in a reflective mood, even Johnny doesn’t spend the rest of the movie ruminating about the future. Like most grown-ups, he’s just trying to make it through the day: juggling multiple tasks, stopping crises before they get worse, or just trying to help another person in need. Stopping to ask questions for his job is likely one of the few times he gets to think about his own answers. That is, until he lives with an inquisitive child with his own set of questions.

As in Mills’ excellent earlier features “Beginners” and “20th Century Women,” the real driving narratives of our stories are the people in our lives: the ones we love, the ones we argue with, the ones we rebel against, the ones we disappoint, and the ones we run to for comfort. In “C’mon C’mon,” Johnny comes to the aid of his semi-estranged sister Viv (Gaby Hoffmann) when she needs to go to Northern California to help her mentally ill husband, Paul (Scoot McNairy), seek treatment. A shared background of pain and words they couldn’t take back had separated the two siblings after their mother’s death. Now, Viv asks Johnny to step in to take care of her precocious son, Jesse (Woody Norman), in Los Angeles. Thrust into a full-time caretaking role for his nephew, Johnny gains a new appreciation of the world, how difficult it is to be a parent and the many moments of joy and frustration that come with it.

Written and directed by Mills, “C’mon C’mon” explores the new dynamic in Johnny’s life with heartfelt earnestness. He is trying to make the best of a tough situation, trying to shield Jesse from the harsher realities of his father’s illness and trying to work with his nephew’s many quirks. Norman may occasionally steal the show with his antics, but it’s Phoenix's vulnerable performance that grounds the movie. “C’mon C’mon” follows both the sweet moments of connection and understanding between the two as well as their missteps, like when Jesse briefly disappears from view in a store and throws Johnny into a panic. The uninitiated uncle freaks out when he finally finds Jesse, which only causes the boy to withdraw further. It’s an honest mistake yet painfully relatable. The next scene involves Viv coaching her brother through the forgiveness process and trying to regain Jesse’s trust in Johnny. Relationships are all messy experiments, and the process of trial and error begins even before we fully understand their results.

On the subject of experimentation, Mills takes a bit of a departure from his previous features and shoots “C’mon C’mon” entirely in black and white. It’s a striking choice, casting the everyday highs and lows of parenting and caregiving under this cinematic prism, something that feels both timeless (growing up and facing reality) yet still very much a product of its moment in history (audio storytelling in the age of “This American Life”). The cinematography is not sharply contrasted, so it allows for much more grey tones on-screen, a perfect landscape for characters still making sense of their new reality. Mills and his cinematographer Robbie Ryan also make a subtle LA vs. NYC visual comparison, showing the sunlit sidewalks and bungalows of Los Angeles opposite the crowded buildings and grimy spirit of New York City. Even in the romantic glow of black-and-white cinematography, these two locations are their own characters. Thanks to the nature of Johnny’s gig, the movie also makes trips to Detroit and New Orleans, showing that they too can be shown in this light. There’s a heightened level of attention to background and setting, be it a bustling downtown, a house full of memories, or the far reaching branches of an old oak tree, that creates these evocative backdrops to echo the human characters' emotions in that scene.

“C’mon C’mon” is the kind of movie that invites reflection. It’s not building towards a larger cinematic event or full of explosions. It’s a sincere drama about relationships, told from the perspectives of different members of one family. Through its questions, posed both by an adult on the job and a curious child, and gentle pacing, the movie can tap into our own memories of when we were once lost in a store or scared something was happening to our families that we didn’t yet fully understand. It imagines a place where reconciliation is possible and the questions to get to know each other better keep coming. We have however long after the credits roll to think about what our answers would be. 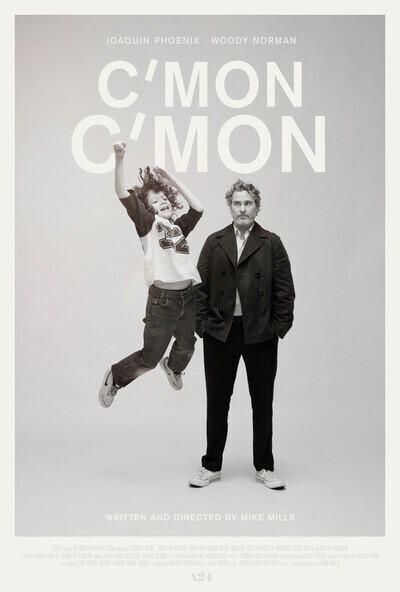