If nothing else, the lightweight gangster thriller “Clover” is a quaint throwback to that period in in the mid- to late ‘90s when a legion of dinky genre filmmakers flooded video stores with “Pulp Fiction” and/or “Goodfellas” ripoffs. Thankfully, “Clover”—which follows two feuding Irish brothers Mickey and Jackie (Jon Abrahams and Mark Webber) after they offend and then run away from generic Italian mobster Tony Davolo (Chazz Palminteri)—mostly works as cinematic comfort food thanks to the movie’s game ensemble cast and director of photography Matthew Quinn’s thoughtful execution of producer/director Jon Abrahams’ better ideas about camera blocking and movement. So while “Clover” may not be original, it is pretty watchable.

You know you’re in for an overcooked slice of meathead entertainment as soon as “Clover” begins with Ron Perlman, in character as a mob boss who’s barely in the movie, delivering an interminable speech about how societal order must be maintained since modern society is like a wolf pack (or something). Perlman seems to be having a good time, and his mix of professionalism and swing-for-the-fences ardor sets the pace for the rest of Abrahams and screenwriter Michael Testone’s movie. Because it is Abrahams and Testone’s movie, as they announce with every flabby monologue and variably composed image. “Clover” is the kind of movie that you watch to hang out with its protagonists; plot, sustained tension, and general character development don’t matter as much.

You also might know whether you’ll enjoy “Clover” based on the movie’s real first scene: Mickey chews Jackie out for losing at Blackjack so badly that they now have to close their family-run bar. Minutes later, both men are kidnapped by, you guessed it, hired goons for a meeting with Tony Davolo, an old-school Italian gangster (ie: he hates the Irish) who offers them a solution to their money problems: they must help Tony’s two sons collect a debt from another welsher.

That plan does not, however, go well, and one of Tony’s sons is shot to death by Clover (Nicole Elizabeth Berg), the aforementioned welsher’s thirteen year-old daughter. Some light shenanigans follow: Mickey and Jackie run away from Tony’s goons with Clover in tow. They try to hide from Tony’s guys, but, as you might guess, the movie inevitably climaxes with a three-way gunfight showdown between: Mickey’s group; Tony’s thugs; and a third party (because there’s always a third party) of professional killers, in this case lesbian lovers Virginia and Gertie (Erika Christensen and Julia Jones). Before that: viewers are introduced to a cavalcade of disposable supporting characters, like Jackie’s horned-up, but conflicted girlfriend Angie (Jessica Szohr), and the brothers’ mentally unstable friend Terry (Jake Weber), the latter of whom likes to make deadly chemical weapons, and give them cute nicknames like “Marvin.” Yes, “Clover” is that kind of movie.

Then again, while Abrahams and Testone often seem to be working through a checklist of prefab post-Tarantino cliches, most scenes are paced, shot, and performed well enough. You might roll your eyes when Palminteri beats a man to death with a bowling pin, or when Angie and Terry talk about their future together, especially what kind of ovens they want to buy for the pizzeria that they co-own. The bad news is: Palminteri’s character is a walking cartoon character, and Angie and Terry aren’t much better: the tagline for their restaurant is “you’ll die for our pies.” But there is some good news (maybe): you might enjoy how far out on a limb Palminteri goes in some scenes, like when he mourns the death of his favorite son. You may also like how hard Christensen and Jones work to enliven Testone’s unfortunate comedic spin on gay romantic intimacy, like when Virgina asks Gertie if her partner wants her to clean “Shirley,” Gertie’s gun. That line’s fine enough, if you are now attending, or wish you still were in college.

Look, don’t get me wrong, “Clover” is not getting a soft pass just because it’s the kind of dumb junk that I used to rent from Hollywood Video and watch with my freshman dorm roommates. I’m not nostalgic for some of the movie’s goonier elements, like pretty much any of its have-it-both-ways jokes about/featuring women, or Jake Weber’s bizarre Dustin Hoffman meets Richie Tenenbaum vibe (where exactly did they find that brown corduroy suit?). I’m also not crazy about how many scenes feel like dress rehearsals and/or test footage for Quinn’s (mostly decent) cinematography. But while “Clover” is a mess, it’s also rarely boring. 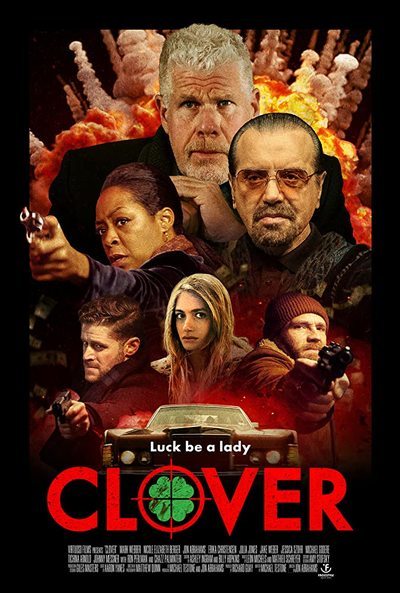