The most exciting thing about the soapy, psychedelic American vampire psychodrama “Climate of the Hunter” is how weirdly poised it is even during its strangest and/or most crass moments. You will see things in writer/director Mickey Reece’s cult-friendly oddity that will make you question your sanity, and not because they’re so wild, but because they seem to be of a piece with a story that's both familiar enough and utterly alien. Tacky but gorgeously lit ‘50s-era dinner recipes—lobsters, “cherry cherry cheese pie,” and jello salad—are overlit with twinkling star filters, and casually mixed into whimsical dinner conversation about the “finite nature of the universe” and a Portuguese priest who was ex-communicated for farting too loudly, among other things.

Tempers simmer, but never really flare between the movie’s five main characters: presumed vampire Wesley (Ben Hall) and his son Percy (Sheridan McMichael) are invited to dine and stay with their reclusive and estranged friend Alma (Ginger Gilmartin), her alienated daughter Rose (Danielle Evon Ploegger), and her catty sister Elizabeth (Mary Buss). And while there isn’t much of a plot to “Climate of the Hunter,” there is enough surreal ambience and sporadic, deadpan humor to make 90 minutes seem simultaneously too short and just enough. This is a rare new horror movie that makes you sit up and ask “Who made this?” knowing that whoever it is, nobody else could have made what you’re looking at.

With all that said: you might be wondering what “Climate of the Hunter” is about. That’s often besides the point, given how much of the movie is about getting lost in the proverbial weeds with conversations that stop and start because of too much garlic, estrogen, and poetic asides about the starry night sky. But “Climate of the Hunter” is essentially about unrequited love and familial angst as told by—or about?—Alma, a character who is introduced to viewers by way of a typed psychiatric report; some stand-out phrases are “delusional,” “schizophrenia,” and “body dysmorphic disorder.” Reece presents this document (dated on October 14th, 1977), in a long take that makes you lean in to absorb what’s plainly shown, but never traditionally explained to viewers. We’re left to make up our own minds throughout, which wouldn’t be so exciting if Reece’s movie wasn’t so formally precise and jarring. Like the disorientation of a deep-sea diver coming up for air, as Wesley puts it … or of estranged lovers and family members who are re-uniting after a long period of self-imposed isolation (20 years, in this case).

Divided into Portuguese-subtitled chapters, “Climate of the Hunter” is very much about its protagonists’ conflicting, eerily specific ideas about each other. Wesley may understandably be the focus of the movie’s drama, being a vampire who looks like a slightly melted wax dummy of John Carradine’s Dracula. But Wesley’s motives are ultimately unclear, despite being obviously less than noble: he quotes Baudelaire, rhapsodizes about former-polestar Vega (“She’s my favorite”), and welcomes the advances of both Elizabeth and Rose.

Wesley’s a little mysterious to us since he’s usually the catalyst rather than the subject of the movie’s soapy, provocative discussions about sex, the deranging effects of social isolation, and other long-suppressed topics of discussion. As you watch “Climate of the Hunter,” you see Reece’s characters repeatedly struggle to show each other exactly what’s in their tortured heads, but never really communicate more than 60% of whatever they’re feeling.

Reece’s clear vision of Alma and her guests more than compensates for the apparent fact that none of his characters really grow or change over the course of their story. Which makes sense given that “Climate of the Hunter” is a darkly comic tragedy that’s also never really funny in a laugh aloud way, not even when Wesley hacks up a lung (among other things) at the dinner table. Reece’s characters are firmly stuck in place: they talk about the love they’ve lost for each other, but never seem willing or interested in a mutual reconciliation. “Climate of the Hunter” is, in that sense, a prolonged airing of grievances that’s only interrupted by self-mythologizing asides, impenetrable nightmares, and some troubled stargazing. Every conversation is as emotionally fraught as the movie’s visual compositions are precisely lit and blocked.

I can’t honestly recommend “Climate of the Hunter” to everybody; it’s not a generic horror movie, but rather a dark arthouse fantasy that brings to mind the films of Ingmar Bergman and Andy Milligan. To say that Reece’s movie is bound to be an acquired taste would be something of an understatement. But I hadn’t seen a single Mickey Reece movie before watching “Climate of the Hunter,” and I was immediately eager to see more (if you’re also curious, try “Mickey Reece’s Alien”). “Climate of the Hunter” is for anybody who, when dining out, feels compelled to try (and hopes to love) the weirdest item on the menu.

Now available in select theaters, virtual theaters, and on demand and on digital. 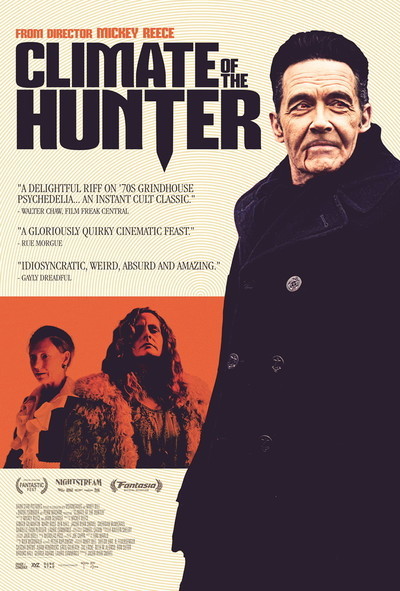