There are many burdens on Clara's back, a back already twisted with painful curvature of the spine. Clara is 40 years old and kept in a childlike state of existence by her mother. Years ago, Clara apparently saw the Virgin Mary, and this has given her a local reputation as a healer and a mystic. People living in the remote Costa Rican village make pilgrimages to Clara's house, crowding inside, waiting for a glimpse of her, waiting to kiss her hand. Clara doesn't seem to want to participate in this ritual, but she isn't given much of a choice. Clara's mother (Flor María Vargas Chavez) runs the show, passing around the hat for donations. In such a poor area, every little bit helps. But something is happening to Clara. Clara is waking up to herself, to her individuality, to her body and what it craves. In doing so, she ruptures the connections of her family. Clara stops participating in the status quo, leading to all kinds of unexpected results. This is the loose premise of Nathalie Álvarez Mesén's haunting film "Clara Sola," co-written by Mesén and Maria Camila Arias, with Wendy Chinchilla Araya at its center as Clara.

Clara lives on a small farm with her overbearing and extremely religious mother and her 15-year-old niece Maria (Ana Julia Porras Espinoza). Maria cares for her aunt, but she is also bursting with puberty and obsessed with preparing for her upcoming quinceañera. A young man named Santiago (Daniel Castañeda Rincón) stops by regularly to rent their horse for local tourists (and sneak smooches with Maria). Clara and the horse—a white beauty named Yuca—have a powerful bond: it's the only relationship where Clara gets to assert dominance. She makes a gesture, and Yuca understands and obeys.

Outside of that, Clara is condescended to, and basically led around, watched over, and stifled. Clara has been so totally repressed that there is no plausible outlet for self-expression. Any deviation from the mother's expectation is viewed as rebellious, or "naughty," or Clara just "acting out." Even more upsetting, Clara has been offered a free surgery to correct the curvature of her spine, and her mother refuses it saying, "God gave her to me like this. She will stay like this." One wonders if Clara's "brand" as a mystic healer would be tarnished if she herself had to be healed by modern medicine.

Santiago is the wild card, the Agent of Change in this changeless world. Something in Clara is activated by him, turned on by him, but then again, she's turned on by a lot. A daytime soap opera gets her motor running. Her mother senses Clara's sexuality and goes to great lengths to suppress it (even, awfully, rubbing hot chilis on Clara's fingers to discourage masturbation). The "romance" between Santiago and Maria—forbidden, secret—draws Clara into its web. She peeks around corners at their embraces and caresses. Does she want to change places with Maria? What is this woman feeling? Does she even know?

"Clara Sola," from the first shot to the last, stays very close to Clara's point of view. Clara's consciousness is connected to the natural world, and its animals, greenery, and insects make up her primary and most important relationships. Cinematographer Sophie Winqvist makes this explicit in all kinds of ways, nature as a living breathing entity, but particularly in one extraordinary sequence where Clara escapes the stifling confines of her house at night, and lies at the foot of a gigantic twisted tree, the blue and black shadows making her indistinguishable from the night around her, surrounded by a swarm of green fireflies, blinking languidly through the blue. It's a potent moment, rich with the symbolism of Clara's submerged sexuality, aching to explode, but only allowing itself out in tiny portions, as tiny as those fireflies.

Clara is an original creation, and this is mostly due to Araya's earthy physical performance. Araya had never done a film before (extraordinary, considering the result), but she is a dancer, and she approaches the role primarily in a physical way. It is through the body that Clara's reality is told. Mesén wanted to cast a dancer, and initially envisioned Clara as a younger woman, but Araya was so captivating there was no other choice. Clara's disability affects all of her movements: her walk is sturdy and yet strangely halting at points, her feet buckling out to the sides to compensate, her legs moving to adjust to the spine. The shapes her body makes are, at times, archetypal, grasping fingers and uplifted arms, etc., and yet Araya is always grounded in reality. She shows the strong will inside this cowed and dominated woman. Once she starts to feel her own power, once she starts to understand rebellion is possible, she can't stop. (You can feel the influence of "Carrie" on "Clara Sola," especially with its themes of toxic matriarchy and the terror of sexual maturity.) Araya is riveting and feral, especially in those moments when she starts to break free of her conditioning.

Clara's sense of herself comes into stark clarity through her conversations with Santiago, who probably has no idea (at least at first) what he is unleashing in her. There's a fascinating moment where he asks her what it was like to see the Virgin Mary. Clara has no attachment to that narrative. That narrative was invented by her mother as a way to cope with the shame of having a disabled daughter. Turn her into a magical mystical being, don't allow her to get corrective surgery, God will bless us then. Clara says to Santiago in response to his question: "I can do whatever I feel like." It's a startling statement. She sounds proud, stubborn, sure of herself. Clara has worlds within her, vast spaces where no one can get to her, where she is free. A woman saying "I can do whatever I feel like" is threatening no matter the context, but in this one especially.

This is Mesén's debut feature film, and it's a powerful and intuitive piece of work. Working with mostly non-professional actors, she has created a fraught space of repression and sorrow where Clara—a woman of very few words—can let us know what life is like for her, what she sees, feels, and wants. 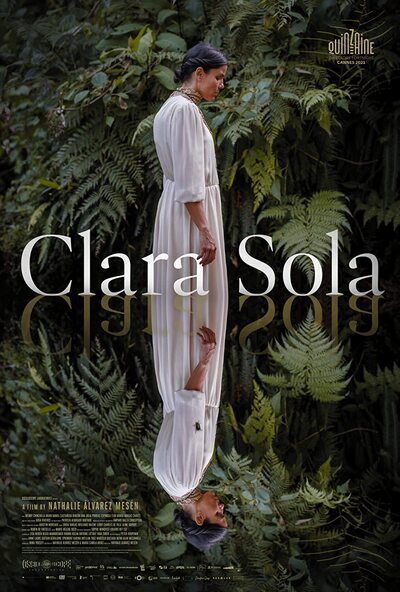