In one of many lines of clichéd dialogue in “City of Lies,” Dayton Callie’s Lieutenant O’Shea tells his officer, Russell Poole, played by Johnny Depp, “I’ve told you a hundred f**king times, you’re off the Christopher Wallace case.” I would swear we heard the other 99 too.

Brad Furman’s long-delayed look at the case around the murder of rapper The Notorious B.I.G. wants to dig into one of the most famous celebrity murders of all time with a “Zodiac” degree of procedural obsession, but it succumbs to flat storytelling and direction that can’t figure out how to tell this tale in this runtime. The truth is that the case around Christopher Wallace opens up numerous avenues regarding years of corruption in the Los Angeles Police Department. There’s a reason there have already been so many documentaries and even a TV series about B.I.G. and Russell Poole. “City of Lies” just doesn’t add anything new to the conversation.

At its core, “City of Lies” is about dual obsessions, that of a cop whose life was basically torn apart by the roadblocks he faced in his pursuit of justice for Voletta Wallace, the mother of the slain rapper, and that of a journalist who reaches out two decades after the murder when he’s asked to write an anniversary piece. Jack Jackson (Forest Whitaker) thinks he’s got Poole figured out early on, mocking the detective’s wall of pinned photos as an obvious sign of a conspiracy theory nut. Of course, as he digs into what Poole’s investigation unearthed, Jackson also becomes convinced that the Wallace case wasn’t solved for a reason: doing so would bring down the LAPD.

“A murder like that only goes unsolved if the police don’t want to solve it.” This has long been the thrust of the conspiracies around the death of Christopher Wallace. He was murdered in the street, in plain sight of numerous witnesses at a crowded intersection, and the cops can’t get anywhere in solving it? Maybe there's a reason for that? Naturally, the roadblocks he faces and the corruption he uncovers drives a good detective like Poole nearly insane, and Depp is strong in his best performance in years, finding the right world-weary tone without overplaying that aspect of his defeated veteran. He’s easily the best thing about “City of Lies,” although engaging character work by always welcome players like Toby Huss and Shea Whigham is also wasted on a film that doesn’t know what to do with it. Whitaker really falters most of all because of the slack direction, looking almost uncertain of what he should be playing at times. Furman’s direction is constantly letting down his actors. You know you’re in trouble when Voletta Wallace can’t really convincingly play herself. Of course, it’s not her fault but that of the over-written dialogue given to her and the shapeless filmmaking.

That’s the sense through most of “City of Lies”: that there are pieces here that work but no one figured out at all how to assemble into an entertaining or enlightening piece of filmmaking. It’s a dull, overly familiar affair that really only reminds one that Depp should have segued nicely into old man roles if his personal life and on-set behavior hadn’t derailed his trajectory.

The fact that this film sat on the shelf since it was filmed in late 2016 adds to its lack of urgency. Christian Contreras' script would have felt dated four years ago; it’s even worse now. It becomes something of a friendship tale as Jackson draws closer to Poole, although that feels ultimately manipulative. Is this a murder mystery? A procedural? A tale of police corruption? A commentary on inequity related to murders of POC as a closing statistic implies? It’s somehow all of the above, but not to a degree that any of these possible story approaches are satisfying. Any good journalist knows that they have to break a story to figure out the best way to tell it to their readers. “City of Lies” never bothered to do that.

In theaters today, March 19th. On VOD on April 9th. 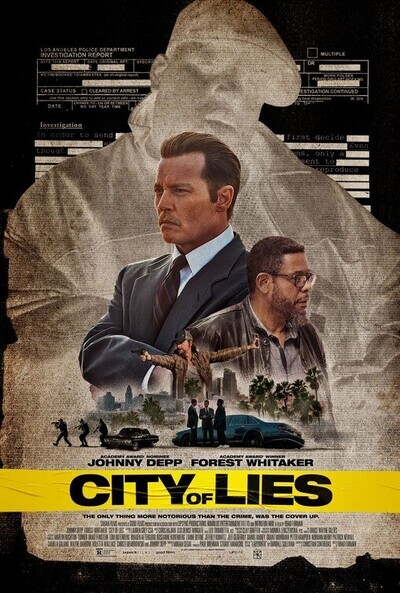