As Laura Gabbert’s documentary “City of Gold” opens, the camera tracks in on a man sitting in front of a laptop, presumably at home. With his balding pate atop long gray sidelocks and droopy moustache, he looks a bit like David Crosby. Only more corpulent.

He is Jonathan Gold, celebrated food writer. The film is a flattering portrait of him and, via his passionately informed perspective, of Los Angeles and its food culture, especially the food carts and hole-in-the-strip-mall ethnic enclaves that make the city such an extraordinary culinary mosaic. That description alone perhaps suggests why this is one of those films that make the reviewer’s duty to assign it one-to-four stars a pointless exercise, since such judgments will vary wildly depending on the individual viewer’s perspective and tastes.

For fans of the genial, garrulous Gold, of Los Angeles culture or of films about food, “City of Gold” will easily merit four stars and its 90-minute length. For those less enamored of those subjects, its claim on any stars will be qualified by some serious questions about its cinematic worth.

Obviously, there’s a sizable niche audience for this kind of relatively innocent—if occasionally self-important—type of fun. Yet there are also viewers for whom the ostensible attractions are off-putting precisely because they are vicarious.

Among the questions that “City of Gold” might address, but doesn’t, are those concerning the type of journalism that Gold practices. Do food sections in papers like the L.A. Times, where he writes, have different intents and practical uses than other sections? Does their value in attracting readers and advertisers dictate a tilt toward softball “lifestyle” coverage rather than anything more hard-edged? Does such a newspaper hire food writers based on their propensity to give good reviews? Or not?

Throughout the film, we hear numerous folks—other writers, chefs, restaurant owners, experts of various sorts—testify that Gold is a great critic. (His Pulitzer offers a similar endorsement.) But the usual definition of a great critic is one who can dish out the negative along with the positive, and indeed whose life centers on distinguishing the two. But “City of Gold” offers no evidence of Gold ever penning a negative review. This is why it ultimately comes off more as a cinematic puff piece than a “real” documentary.

As for self-criticism, he smilingly confesses to one flaw: his tendency to procrastinate, which leads to missing deadlines and obliging editors to hound him for his copy. Though this suggests an inclination toward self-indulgence that parallels his appetite for food, Gabbert doesn’t seem inclined to connect the dots. Perhaps for this reason, the scenes of Gold with his L.A. Times colleagues have an oddly stiff quality, as if some editors in the room don’t want to say exactly what they think of their rotund star critic.

In this and other ways, the film evokes the kind of febrile self-consciousness that one often observes in L.A. From baristas to movie stars, there’s a constant urge to perform, to create an impression, to manage an image. And what goes for individuals goes for the city itself: like an advertising supplement, Gold’s and Gabbert’s L.A. wants to be seen as an amazing fount of saliva-provoking foodie diversity—a Disneyland of the mouth.

And maybe it is. But if the case presented by the critic and the filmmaker weren’t such a rah-rah, uninflected, self-congratulatory hard sell, it would be easier to buy. 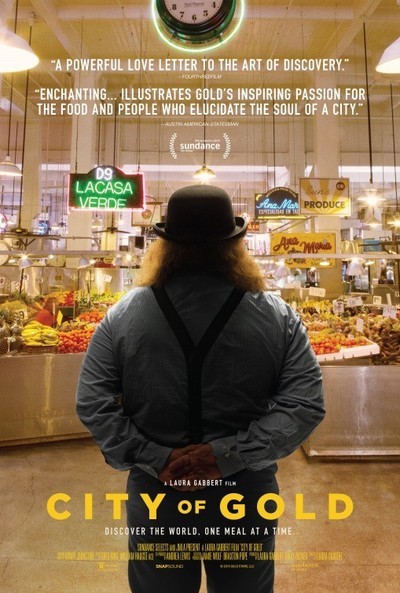 Jonathan Gold as Himself