Chuck Wepner, the "Bayonne Bleeder," the boxer who fought Muhammad Ali in 1975 and—famously—knocked Ali down in the 9th round (equally famously, he lost the fight when Ali knocked him down in the 15th), was also known as "the real Rocky" (apparently it was something he touted often), the guy who was the inspiration for Sylvester Stallone's scrappy underdog Rocky Balboa. Wepner said of the fight with Ali, “I showed the world that I belonged in there. That’s what I really wanted to do," a comment revealing Wepner's trademark confidence mixed with huge insecurity about his status. If there's one aspect that Liev Schreiber captures perfectly in his portrayal of Wepner in Philippe Falardeau's feature film "Chuck," it is that energy, the energy of the loudest, most expansive braggart in any room, terrified that he is seen as some kind of a joke.

"Chuck" struggles initially to find its footing, with an over-reliance on voiceover (much of it inspired by the style of Ray Liotta's deadpan in "GoodFellas") and an extremely on-the-nose soundtrack ("I Believe in Miracles"—already over-used in film soundtracks—playing over a scene of Wepner traveling to an important fight, etc.) These choices dominate early on, and don't leave you any room to make up your own mind. But "Chuck" ultimately works, mainly because Schreiber is so watchable. There's something compelling about seeing a man who is so strong and so weak, simultaneously. You like him in spite of him.

When the film opens, Wepner is a Bayonne celebrity, the BMOC, the guy who walks into a bar greeted by cheers. Phyliss, his wife (Elisabeth Moss, who has one of the most interesting and busy careers in show business right now), loves him, supports him, but also has her limits, as shown in a wonderful scene early on when she breaks up a "date" he's on with some blonde bimbo. Phyllis doesn't throw a fit. She's as tough as her husband. She just makes her points, devastatingly, as the two culprits squirm. Ron Perlman plays Wepner's manager, working out of a run-down gym, trying to drum up gigs. Naomi Watts plays Linda, a local bartender whom Wepner falls for instantly, not just because she's beautiful, but because she has seen "Requiem for a Heavyweight," his #1 all-time favorite movie. (Fragments from that 1962 film are interspersed throughout.) He asks Linda out and she turns him down. "Aren't you married?" she asks.

Into this small-town small-time world (the film really understands Bayonne and its rhythms) comes the random chance to fight the heavyweight champion of the world, Muhammad Ali. Ali and George Foreman had just had their "rumble in the jungle" in Zaire in 1974, arguably the most famous boxing match of all time. Wepner, out of seemingly nowhere, is thrust into the upper echelons of the sport, facing reporters, staying in hotels, participating in good-natured press conferences with Ali (a wonderful Pooch Hall). Wepner flip-flops between elation and loneliness, chest-thumping and insecurity. This is not a complex man. He's all impulse, and he has no impulse control. What's fascinating about this story is that he loses the fight, but he loses in such a way that he becomes a celebrity. "Rocky" the franchise has gone in many different directions (Balboa basically helped end the Cold War at one point), but that first film ends with Balboa losing (a bold choice), but actually winning in the hearts of minds of the crowd, of Apollo, of his girlfriend. It's a killer hook, and it's not surprising that Stallone would be drawn to that aspect of it.

One of the most fascinating sequences in "Chuck" is when Sylvester Stallone steps into the story. Stallone is played by Morgan Spector, who nails Stallone's distinctive voice, as well as his disarming openness and enthusiasm. Wepner becomes so caught up in the "Rocky" thing that when he watches the film sweep the Oscars, it is as though he's part of the team that made it. In many ways, he is an unbearable man, fragile and selfish and immature. Schreiber plays him as a man who lacks the ability to reflect, who is unable to correct himself. He's all appetite. He cannot say no to a challenge, a line of coke, a girl behind the bar. "Chuck" is smart in that it does not plead too much for us to sympathize with the main character. The approach is unfussy enough that it that makes you feel like you are just following Wepner around, observing him. There are scenes (one, in particular) that are almost too embarrassing to watch. But there's a tenacity in Wepner, a dogged self-belief, that is weirdly charming. You can understand why Phyllis is fed up, but you can also understand why Linda is drawn to him.

Actors have a tendency to get grandiose when they play boxers. It's a pitfall with that kind of role. Schreiber doesn't. He, a self-aware actor, plays a man completely lacking in self-awareness, and he does so in a way that is invisible. You don't "see" his work as an actor. Schreiber has great range; he can be menacing, sexy, thoughtful, funny. There's no sense of strain or reach in his characterization of Wepner. It's extremely truthful work.

Boxing movies have been as much a part of the movie industry's storytelling arsenal as the Western. There's the visual fascination of the sport itself, the fighters' wordless commitment to physical movement, the ballet of it. There's also the thematic aspect that's a draw as a metaphor: a guy gutting through pain, standing up after being knocked down, the sheer endurance it takes to even get up the guts to walk into the ring. There's the cinematically rich sleaziness that surrounds the boxing world, bookies and gangsters, the temptations of easy money, drugs, floozies. We've seen it all before. "Chuck" does nothing new, and it moves through boxing tropes like it's ticking off checkmarks, but there's an honesty to it, a fresh and messy one. 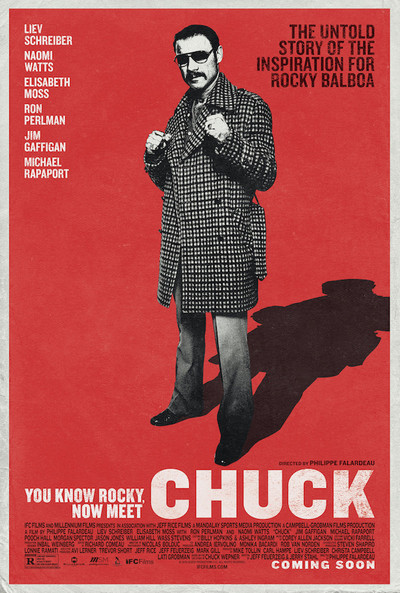 Rated R for language throughout, drug use, sexuality/nudity and some bloody images.