The content warning before “Children of the Underground” sits differently than they normally do in such disturbing documentaries. It’s not just a necessary head’s up that we are about to learn a whole lot about child sexual abuse, but a foreshadowing of how this docuseries is not afraid of some of the most difficult subject matter. Across its five episodes, “Children of the Underground” does not shy from its subjects’ complicated actions, or of disturbing details, because it remains focused on our pursuit of learning how to best protect children.

“Children of the Underground” shares a fascinating documentary antihero in Faye Yager, who inspires the series’ embrace of complicated choices within the ultimate cause of protecting children. Yager started the titular organization that wanted to protect women and their children from the spouse who was allegedly being abusive. She would help them go “underground,” to take on different identities and live in safehouses nationwide with anonymous hosts. But the semantics of her heroism was far more complicated, starting with how by law she was harboring fugitives, as these women had “kidnapped” their child from fathers who then wanted custody. For some it's a no-brainer: The law did not serve these women, it even punished them for speaking up and trying to get justice against the abusers, so they made their own system. Anything to protect their kids.

And because of the male-dominated courts, those fathers would often be able to get back the children they allegedly abused. For the same reason, Faye Yager became an enemy of a broken family court system, and at one point was one of America’s most wanted. When she was captured and put on trial, it became known that she had her own intense methods of trying to get the children to share their stories. Was she being abusive, or misguided? What qualifications did she have to take this on?

Faye’s work helped countless mothers and their children, some whose stories are captured with great detail by this narrative. A woman named April shares the extensive story of running away from her husband with her daughter Mandy, hiding for years before being caught. But during that period, April was also brave enough to appear on Sally Jesse Raphael’s talkshow and share her experience as a current fugitive. We also learn about a woman named Kaylee whose grandparents had kidnapped her from her family, after suspecting that Satanic ritual sexual abuse was involved. Although Kaylee talks about the strange experience of being on the run, her feelings about her grandparents’ acts do not have the bitterness one might expect.

Faye has her own trauma with this, a horrific injustice that she experienced with her ex-husband (who later was found guilty of child sexual abuse) and daughter Michelle; the court gave custody to the father after Faye found horrific evidence of abuse. You can see that nightmare in her eyes often, when she speaks on TV talkshows about her operations, and the clear-cut urgency in her voice. Without making too much of a point of it, directors Gabriela Cowperthwaite and Ted Gesing treat “Children of the Underground” as an intricate character study of someone who is scarred and flawed, but fixated on what we'd all want: for children to be safe. If mistakes are made in the process, does that negate those who are saved?

And with these stories, “Children of the Underground” embraces nuance in its most empathetic fashion. It gives survivors space to talk about how certain memories that can be hazy, even though the events have been so heavily influential on their lives. That alone is a striking part of the series’ courage, which at times can be dedicated to just getting these first-person experiences on record.

In its expansive look at the period, "Children of the Underground” also offers a striking context of how people did and did not know how to talk about child sexual abuse publicly or privately. The series captures the growing pains of understanding mental health, which includes the people and children who were mishandled in the process. It’s all the more sobering when one realizes how certain parts of the family court have not changed, or that the same problems can arise. Some might be tempted to view “Children of the Underground” as charcoal-black true crime fodder, but it’s more of an outraged activist doc, similar to Cowperthwaite’s SeaWorld-breaking “Blackfish.” “Children of the Underground” is an epic about someone who led a charge against a system that was and continues to be misguided.

“Children of the Underground” has a lot on its mind, and the focus on different survival stories and news can almost get a little tangled up as it goes from one life story to the next. It’s tricky enough that the series almost gets loss when it focuses so much on the Satanic Panic of the late ‘80s, and how that made adults (especially Faye) even more out of touch with the real horror that might have been going on. For both its content but also its widespread editorial focus, the series can be the definition of “a lot,” and it’s certainly not something one can binge to just satiate an appetite for sick sad documentaries.

For as bleak as the material is, its muddy visual approach becomes all the more obvious. The interviews use a repeated motif that has the camera moving to side as someone speaks; it tries to create a reflection for whoever is being filmed, but it doesn’t tie in thematically with the ideas at hand. The stories are best illustrated with its surplus of photos and videos, including all of the time-capsule talk show clips, and the professional candids of mothers and daughters while on the run. They are both striking for their composition but also the moments they capture, these faces in the shadows, uncertain of what’s coming next, but driven by an inner resilience we'd hope to never need.

Throughout, the series circles around the idea of whether Yager did the right thing, asking the same question that people ask of caped crusaders: Who gave you the right to be a vigilante, and take the law into your own hands? That complicated part about Yager and her work drives the series through its murkiness, and makes it expansive storytelling here compelling and harrowing.

Full series screened for review. "Children of the Underground" airs on FX on August 12 and will stream the next day on Hulu. 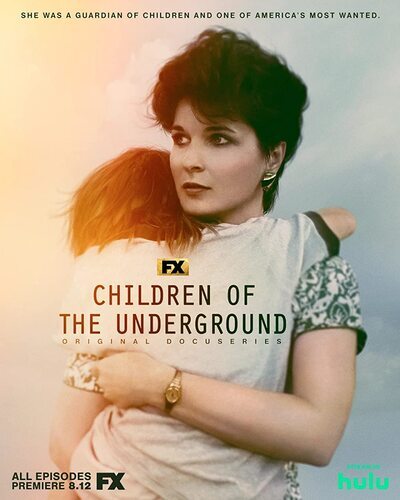