There's something sneakily subversive about Richard Tanne's "Chemical Hearts," an adaptation of Krystal Sutherland’s YA novel Our Chemical Hearts. The genre tropes are so thick in the film you can barely see through them, and yet, at the same time, "Chemical Hearts" subverts those very same tropes. This makes the film a very unpredictable experience, and it is here that the movie really shines. Where you think the story is going is not where it goes at all. "Chemical Hearts" suffers from a somnolescent tone, and its mood is often dreary and inert, at odds with the high school romance milieu. These things are all undeniable, and yet the subversive streak helps make "Chemical Hearts" a deeply felt teenage melodrama.

Henry Page (Austin Abrams) has always wanted to be a writer. In voiceover, he shares his frustration that nothing has ever really happened to him, and therefore he has nothing to write about. Enter the new girl in school, Grace Town (Lili Reinhart). (You can see by the character names alone that "Chemical Hearts" wears its outsized metaphors on its sleeve.) Grace walks with a cane, reads Pablo Neruda for fun, and has a murky past. Henry wants to be a writer, but other than that he has almost no defining characteristics, except for his love of gluing together broken pieces of pottery. (Later in the film, Grace shouts at Henry, "I'm not one of your vases!" Just in case you didn't get it.) Grace and Henry are chosen as co-editors of the school newspaper, and forced to work together closely.

Since "Chemical Hearts" is told from Henry's point of view, we see Grace through his eyes, and she is a very intriguing figure, so standoffish towards him at first it's not clear why he keeps pursuing her, and why she keeps allowing it. If she's so blatantly uninterested in him, then why exactly do they keep hanging out? A mini-montage is employed, showing the friendship blossoming, with Henry cracking jokes and Grace laughing hysterically. Nothing we have seen in Henry up until this point tells us he's this funny, and what on earth could he be saying that would make glum Grace laugh so hard? Using a montage like this is a cheat, skipping steps that really need to be dealt with, or at least acknowledged.

There are tragedies in Grace's past, of course, and her disabling injury is the least of it. She doesn't share her story all at once, and Henry is often left confused and hurt, feeling she has been withholding information. All of this is to say that this is not your basic "manic pixie dream girl" movie. She is not there to help Henry learn/grow/change. This is part of "Chemical Hearts"' subversion. Any idea we may have that Henry is there to help her love again or trust again or heal is completely kicked to the curb once the true lay of the land is revealed. There's a very messy movie here, kicking around within all the blue-toned minor-chord melancholy. "Chemical Hearts" is really about the roiling chaos and confusion of teenage life, of going through experiences—love, sex, heartbreak—for the first time and the huge impact these experiences have on the body and the nervous system (thank goodness Henry's sister is a neurosurgeon and can explain how it all works).

As Grace, Lili Reinhart is a revelation. She has such gravitas as an actress, and it's real gravitas, a weightiness and solemnity that comes from harsh experience. It's all over her face. Reinhart made her name in the CW's smash hit series "Riverdale," and here she stars, as well as executive produces. It's a challenging role, and Reinhart doesn't miss a beat: Grace is actively unpleasant a lot of the time, purposefully unfriendly, and slightly intimidating. There's something thrilling about watching a teenage girl who is all of these things, who doesn't have it all together, who isn't inspirational or "quirky" or any of the other cliches usually imposed on such roles. Grace is a mess, living in the aftermath of a series of catastrophes. She's handling it as best she can, but as the film goes on, you realize how much she's hanging by a thread. Reinhart plays all of this beautifully. Grace resists getting close to Henry, not because she doesn't want to get to know him, but because she does not want to be known. Her wounds are too deep. Reinhart deserves praise for her delicate and powerful understanding of this dynamic, and for her fearlessness in playing a role so resistant to easy classification. Abrams is a thoughtful presence, and best when he's forced to deal with her unpredictable behavior. Watch his reactions. He's paying such close attention to her, trying to read her face. These two young actors make this bond make sense.

If Henry and Grace are three-dimensional, the same cannot be said for the characters surrounding them. Henry's group of friends are stock characters, who barely register. They aren't even really there as confidantes. They breeze around in the background, calling things out at their friend as he walks away from them. They're background noise, as are Henry's parents. Henry's sister is there for scientifically-based pep talks. "Chemical Hearts" feels loosely populated as a result, with Grace and Henry wandering through the town, swimming around in a deep dark pool of emotions and trauma and grief.

In a way, though, this is what teenage life can feel like, especially when powerful experiences hit. The emotions wreak havoc. Teenagers aren't mini adults. It's the other way around. As Henry eventually comes to observe, adults are just scarred kids who made it out of adolescence, battered and bruised but still alive. There's much to be said for what Tanne has pulled off in "Chemical Hearts," for his gentle and measured approach. You actually feel like you have been through something by the end. 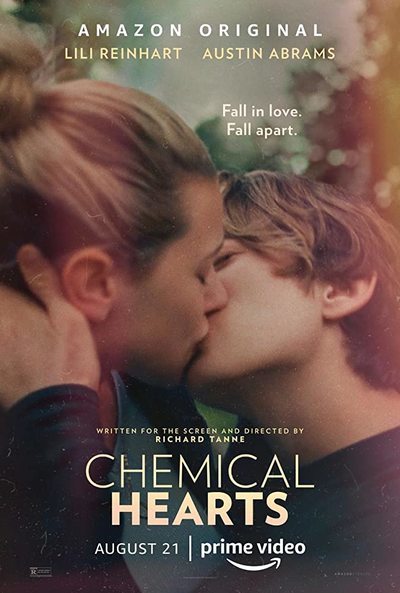 Rated R for language, sexuality and teen drug use.