“Witness the end of an error,” is the tagline for writer/director Adam Sigal’s drab sci-fi reincarnation thriller, “Chariot.” The mistake in question occurs in Harrison Hardy’s (Thomas Mann) life when he runs into Maria (Rosa Salazar), a woman he apparently knew in a previous life who has somehow invaded his current existence. They meet in a very strange building that houses very strange people. Since he’s not aware of having lived before, Hardy’s only clue that something is amiss is a recurring snippet of a dream he has had almost 5,000 times. Desperate for a diagnosis, he visits Dr. Karn (John Malkovich), a mysterious figure who prescribes a hypnosis-based treatment to cure Hardy’s subconscious-based endless loop.

I bet you’re thinking Hardy’s dream is something horrific or traumatic, a creepy bit of nastiness the director will relish scaring the viewer with repeatedly. As your humble reviewer, I am obligated to terrify you by describing it, so hold on to something sturdy if you’re squeamish. The dream is shot from a much younger Hardy’s lower vantage point, beginning in his mother’s kitchen. While stirring dinner, she tells him to go into the other room to ask his father about buying garlic at the supermarket. As Hardy walks through the hallway that connects the rooms his parents occupy, he notices an attic in the ceiling that did not exist in his childhood home. He looks up and sees a red cord dangling from the ceiling. Then he wakes up.

Now, having the same dream every night for decades would be troubling, but if I were Hardy, I’d be more concerned that my subconscious was dry, brittle, and devoid of any imagination. Sigal’s nonchalant staging of the dream only adds to how uninvolving it is and strikes the tone for the rest of the film. Far stranger things are happening in Hardy’s reality, but “Chariot” is never intrigued by them. Either Rosa explains them away, as she does when Hardy asks “what’s the deal about” the man who floats through their building’s lobby every night (“he floats,” she tells him) or they’re embodied onscreen by character actors who are whisked away before we can fully appreciate their weirdness.

As expected, John Malkovich is an example of the latter, but before discussing him, I must mention Scout Taylor-Compton’s character, Lauren. Lauren appears to be a nice, flirty woman, but Rosa warns Hardy that she’s sharing her body with an angry 55-year-old British bloke named Oliver. He takes control whenever he bloody well pleases, and he’s none too happy that Lauren’s sex life is violating his heterosexuality. Watching Taylor-Compton pinball between the accents of Lauren and Oliver is a highlight of “Chariot”; she infuses the movie with the bonkers energy that it lacks whenever Dr. Karn isn’t on screen. It's too bad her screen time is so brief.

I’m not sure what kind of doctor Malkovich is supposed to be, or what the hell he’s doing with his performance, but I sat there eagerly awaiting every unexpected move. His physical appearance is disturbing enough—he looks like a geriatric Joker, complete with a shaggy beard and a hideous red wig—but his line readings and body language land him in the upper echelon of the Nicolas Cage performance scale. Look at his face after Hardy tells him his “nightmare” and you’ll see the words “that’s it?!” figuratively flash in his crazed eyes. Dr. Karn also uses words like “defect” to describe his patient’s experience. At one point, he calls in a guy named Rory Calhoun (Shane West) to assist him, a proper noun in-joke for anyone who has seen “Motel Hell.”

As he did in the hideously awful “Me and Earl and the Dying Girl,” Thomas Mann exudes a smarmy persona and a genuine lack of curiosity for anything outside his character’s dilemma. It’s hard to give one damn about him; he’s the dullest thing in the picture. Meanwhile, even the most minor side character appears to be living their best and weirdest life, lives that you want to follow once they leave the screen. There’s a two-headed woman and an African-American guy whose job is to try to get the last two turtles in existence to engage in a species-saving bout of rumpy-pumpy. By the time Dr. Karn shows up with a bow that pulls his wig back so extremely that his head is shaped like "The Animaniacs"' Warner sister, Dot, you’re hoping he’ll ditch his whiny patient and give us a grand soliloquy.

Thankfully, the climax of “Chariot” allows Malkovich to do just that. He explains the entire plot to us (a scene you can see in the trailer, by the way) and the menace in his voice is delightfully wicked. “You can close your eyes if you want to,” he says to his doomed quarry. “I tried to do this the easy way.” It’s too bad his screenplay did things the hard way; by making all the wondrous ideas surrounding his protagonist’s main story seem mundane, Sigal undermines his own universe. How can we be interested if the movie we’re watching is as unimpressed with itself as we are? 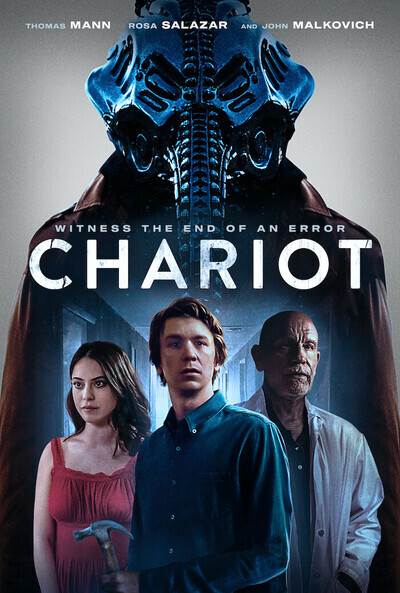 Rated R for language, some sexual material and drug use.