With “Causeway,” Jennifer Lawrence returns to the kind of raw, understated performance that put her on the map and earned her the first of her many Academy Award nominations when she was only 20 years old.

All the naturalism and authenticity she exhibited in Debra Granik’s excellent, 2010 indie drama “Winter’s Bone” are on display again—not that those talents went anywhere when Lawrence was starring in the multibillion-dollar “Hunger Games” franchise or a trio of splashy David O. Russell movies. It’s just that the spectacle surrounding her often overwhelmed what made her such a compelling screen presence in the first place.

Here, in acclaimed theater director Lila Neugebauer’s feature filmmaking debut, Lawrence gets to operate in a lower, more intimate register. It seems freeing for her somehow—the lack of makeup, the subtle rhythms, the unhurried pace. She’s still the Girl on Fire, but the flame is a bit softer, urging you to lean in and feel its warmth.

Lawrence stars as Lynsey, a young woman who’s just returned to the United States from Afghanistan, where an IED caused her to suffer a severe brain injury while she was working with the Army Corps of Engineers. In a stripped-down opening sequence, Neugebauer efficiently establishes Lynsey’s awkward new routine, as she relearns basic tasks like brushing her teeth and holding a water glass. The always great Jayne Houdyshell leaves a major impact in just a few scenes as Sharon, the even-tempered, kindhearted caretaker who houses her and helps her with her initial stages of recovery. (“Causeway” boasts a murderer’s row of veteran character actors in key supporting roles; besides Houdyshell, there’s Linda Emond as Lynsey’s blowsy mother and Stephen McKinley Henderson as her cautious doctor.)

Lynsey’s body language says what she will not: that she’s frustrated, that she’s impatient, that she hates having to rely on other people to get through the day. Lawrence accomplishes a great deal wordlessly in expressing who her character is and what she values. She's so intuitive in the smallest ways. And once we meet Lynsey’s mom—or rather, see her stumble buzzed into the family’s shabby New Orleans house, having forgotten to pick Lynsey up from the bus station—we begin to understand the origin of this independent streak.

But Lynsey’s defiant façade begins to crumble when she strikes up an unlikely friendship with Brian Tyree Henry’s James, the mechanic who’s working on her broken-down pickup truck. The whole movie really changes when Henry arrives, he exudes such a deep humanity. But James also has endured significant physical injury and learned to cope with demons of his own—all of which makes the script from Ottessa Moshfegh & Luke Goebel and Elizabeth Sanders sound like a total downer. It’s not.

Lawrence and Henry enjoy a gentle, easy vibe, and while their characters tentatively feel one another out, in no time they’re affectionately teasing each other with the comfort of childhood pals. Before James becomes a central part of Lynsey’s life, she’s constantly stumbling upon the city’s party atmosphere but remaining just on the periphery of it. He helps her rejoin the real world, and she helps him open up and trust again. They bond by sneaking into the Garden District backyards where she cleans pools by day, and through the extremely Louisiana activity of drinking a six-pack of beer in the park on a sticky summer night. Watching them together is a consistent, simple joy.

But if there’s any tension in Neugebauer’s film, it stems from the growing realization that this reverie can’t last. Lynsey’s increasing restlessness to be redeployed and return to work—whether or not she should, physical or emotionally—is the only potential problem. She mentions that drinking on her meds might not be the best idea, but that doesn’t stop her from doing so night after night without consequences. We know they will push each other to face their deepest sorrows and regrets, but these moments never quite pack the emotional wallop they perhaps intend.

“Causeway” ultimately may be a little too languid, too restrained, but there’s catharsis to be found in its quiet moments and fine-tuned performances.

Now playing in theaters and available on Apple TV+. 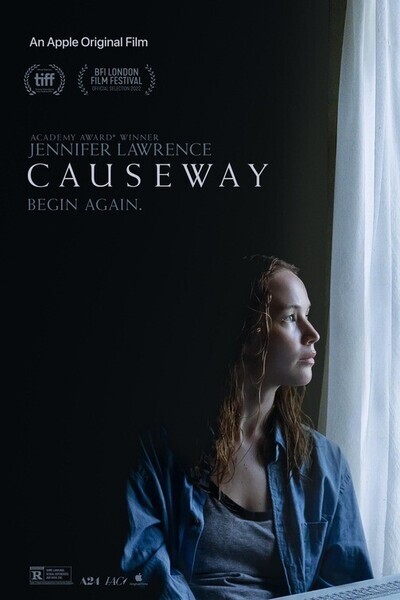 Rated R for some language, sexual references and drug use.