The titular character of director Benoît Jacquot’s “Casanova, Last Love” is famous for being an impressive sexual success, but the way he’s written here, you’d be hard pressed to buy him as anything other than the 18th century equivalent of the Old Man at the Club; he’s the obnoxious guy who spends his evenings harassing young women in the hopes they’ll go to bed with him. In various cinematic incarnations, Casanova has been portrayed by Alain Delon, Heath Ledger, Richard Chamberlain, and Donald Sutherland, whom Fellini cast because he had “the eyes of a masturbator.” In this film, he’s played by a weary-looking Vincent Lindon. Lindon doesn’t have the eyes for self-abuse, but his Casanova does have a jacked-up wig he must have retrieved from a dumpster.

It’s Bohemia in 1793, and senior citizen Casanova is writing his memoirs. He receives a visitor, Cécile (Julia Roy), whose uncle has given him the job of librarian and part-time tutor. Cécile brings up “all the women,” which Casanova dismisses as an exaggeration. “Each one was my first and my last,” he tells her. “I was friends with them all.” “With all?” asks Cécile with a hint of disbelief. “All except one,” Casanova replies. Unfortunately, this movie is about that one.

The narrative flashes back to Casanova’s “exile” in London, a place he hates from the moment he passes a guy taking a very public crap on the ground. Casanova doesn’t speak English and he’s banned himself from speaking Italian, but he has a few French-speaking acquaintances in town. One of these is Lord Pembroke (Christian Erickson), who compares conquest notes with his pal. Seems Casanova has liaisons for four or five months before he gets tired of the woman, while Lord Pembroke kicks them to the curb as soon as he gets lucky. To establish credibility, Jacquot saddles his older protagonist with a few uninspired sex scenes, one of which you can see in the film's trailer.

London brings a reunion with singer La Cornelys (Valeria Golino). At her performance, Casanova runs into the woman who’d caught his eye the night before. But before we find out who Marianne (Stacy Martin) is, we meet Lady Stavenson (Nancy Tate), who is charming and has “un appétit féroce” according to Lord Pembroke. She’s flirty, confident, and not above jumping Casanova’s bones in front of her precious doggies during a carriage ride. Lady S. threatens to bring some intrigue in the film, which means we’ll see very little of her. Instead, she’s swapped out for Marianne, or La Charpillon, as we’ll come to know her.

La Charpillon has been seeing Monsieur de Castelbajac (Lionel Robert). When Casanova pays him a visit, he not only finds her at his house, he also learns the Monsieur is in jail for passing fake banknotes. No matter—he’s really here to make time with the lady. After seductively inviting Casanova to sit next to her on the couch, La Charpillon stops him from getting too frisky. She offers to meet him the next day during his lunch with Lord Pembroke. Lord P. takes one look at his buddy’s date and tells him “make sure you pay her afterwards.” Turns out, La Charpillon is a courtesan, but she’s not willing to sleep with Casanova until they finish the sexless “engagement” she’s set up for them.

La Charpillon basically exists to rev Casanova up before pushing him away, a tactic that lasts for about five minutes before the film devolves into scenes where their attempts at sex are rudely interrupted for laughs. Since there is zero chemistry between Lindon and Martin, things get even ickier when a jealous Casanova turns stalkerish and violent. Eventually, it leads to a suicide attempt, as all retellings of the Casanova legend must.

What a joyless, questionable enterprise this is. Granted, it looks very good, especially if you’re a sucker for fancy drawing rooms and architecture from days long since past. There’s little else to recommend it, however. When we return to a very impressed Cécile at the end of the film, she says “she must have loved you to make you suffer so.” I wanted to ask her if she’d watched the same malarkey I did. Whether you think Casanova's a hero worth idolizing, or a dull-as-dishwater man whore from a sexist past, “Casanova, Last Love” will make you believe he deserved better than this. 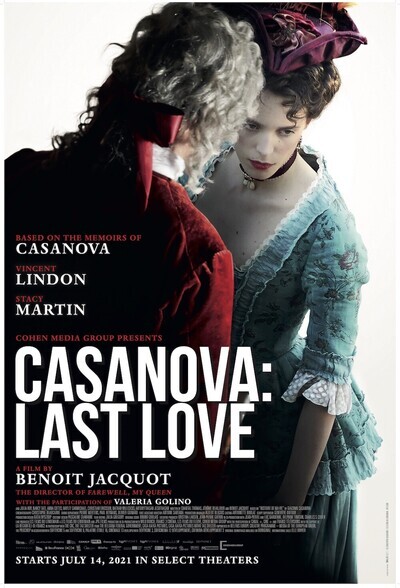