The thinking behind "Captive State" is admirable. The execution is far from that. Here is a thriller about an alien invasion that mostly avoids mass destruction and firefights. Instead, the story follows the humans on the ground, as they go through their routines and, eventually, execute an elaborate plan of subterfuge to try to start a global uprising against the aliens. Appearances from aliens are sparse in co-writer/director Rupert Wyatt's movie. Thrills of almost any kind, on the other hand, are completely absent.

Wyatt and Erica Beeney's screenplay begins with an immediate and hasty explanation of the alien invasion, with a sequence in which younger versions of two of the movie's protagonists witness the bloody deaths of their parents (instantly exploded into red mist by an alien blaster), followed by an audio montage of news reports. The governments of the world surrender quickly after first, violent contact with the aliens, who fly around in boulder-like ships and whose droopy hair turns into jagged quills.

A series of text messages from an old computer fill in the rest. The aliens have become the world's legislature. Certain parts of major cities have been closed off into "closed zones" (such a clever name, that), so that humans can work in great, underground tunnels to harvest the planet's natural resources. Some of the alien leadership lives and operates down there, too, it seems, otherwise the movie's conclusion is even more anticlimactic than it is.

There's a lot of information thrown at us in the movie's opening minutes, so hopefully, it's forgivable if some of the specifics of this synopsis are slightly incorrect. It's not as if the movie itself cares much about the specifics of its story. After the onslaught of exposition during and just after the opening credits, the screenplay intentionally leaves us grasping for whatever details we can gather from the mysterious and late-explained actions of vaguely defined characters with shrouded motives.

This is really to say that, while the movie does eventually provide the basic semblance of a plot, it's a long time coming. In that meantime, there's little reason to care about the movie's characters, its world, or its low-key interpretation of a familiar science-fiction tale.

Nine years after the invasion, parts of the city of Chicago have become a closed zone. On the city's Lower West Side, Gabriel (Ashton Sanders) works in a data-collection facility, where the content of memory cards and hard drives is uploaded to an alien server (apparently, for research, although it's mostly for the purposes of showing convenient back story to explain the movie's final twists—if one can call the withholding of basic character information "a twist").

He's watched over by William Mulligan (John Goodman), a local detective, who was once the partner of Gabriel's late cop father and now is in the service of the aliens. Mulligan is hoping for information about Gabriel's older brother Rafe (Jonathan Majors), who supposedly died sometime prior during an attack on the aliens.

Through a series of convoluted and imprecisely explained moves, the brothers are reunited. With information given to him by Gabriel, Rafe now can begin one, final attempt to lead an attack on the aliens, hoping to spark a worldwide rebellion against humanity's captors.

The story switches perspectives multiple times and with little attention to the characters as anything more than pieces in the plot's game. After being introduced to him and being convinced that he'll be a significant character, Gabriel is trapped by alien drones for a long stretch, giving way to Rafe's plan. The attention, mind you, is not focused on Rafe, who blends into the background of his own scheme, but on the minutiae of the maneuvers of a group of rebels, who have volunteered to plant an explosive on a local government official before he meets with members of the alien legislature.

This scheme and its aftermath take up most of the movie's run time, and at no point are we given a single piece of significant information about a single participant. The same can be said for the major characters, too, even Mulligan, who becomes the backbone of the movie's third act. His seemingly contradictory decisions are explained away by a minute's worth of a flashback via a home movie.

All of this eventually does make some sense, so it'd be unfair to call "Captive State" messy or incoherent. With its lack of specificity and its uncertain grasp on pacing or structure, though, the movie certainly feels that way, and isn't that what matters? 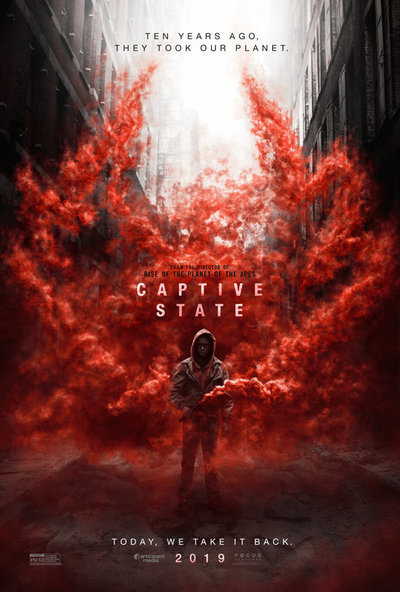