The opening scenes of Manual Martín Cuenca’s “Cannibal” are strikingly effective. The credits roll slowly over a long shot of a gas station at night; florescent lights surrounded by pitch-black darkness. With memories of George Sluizer’s "The Vanishing," and that eerie isolation we all feel in such places, Cuenca creates a sense of unease with just one establishing shot, and he amplifies the intensity when the credits end, the camera pans down to a wheel & dashboard, and Cuenca reveals that it’s been a POV shot: a madman chasing the weary travelers at the station. What follows is equally effective as Carlos (Antonio de la Torre) chases his targets, causing an accident, and carting a victim home for, well, dinner. Carlos is the “title character,” a man who eats the flesh of other men and has been so isolated emotionally that the intrusion of two women into his life shatters his precise worldview.

Carlos is a well-respected tailor in Granada. He also eats people. Cuenca avoids gore but gets the point across in moments that don't involve actual ingestion, such as when Carlos places his first victim on a table and smells her body like a chef smells a piece of fish for freshness. This is not “Hannibal”-level grotesquery but more glimpses of a terrifying life lived behind closed doors. In one of the film’s best moments, Carlos’ new neighbor Alexandra (Olimpia Melinte) opens his refrigerator to see that it’s filled only with bloody packages, to which she says, “You only have meat. Why do you only have meat?”

Shortly after that inquiry with no good answer, Alexandra goes missing. Her sister Nina (also played by Melinte) comes to investigate the disappearance and finds herself drawn to the quiet tailor who lives downstairs. She may find something intriguing about the supportive Carlos but we know not only is he a serial killer but probably ate her sister. You can imagine how well that love affair unfolds.

The entire first act has that visual sparseness of the opening scene: Carlos watching his new neighbor through a window, doing his job, preparing his meals, etc. There’s an almost complete lack of dialogue that fuels the unease. It makes sense that Carlos wouldn’t talk to himself. However, as “Cannibal” progresses it becomes both more traditional in its narrative and frustrating in its lack of depth. Cannibalism is really an unexplored part of Carlos’ personality in the film. A single episode of NBC’s “Hannibal” gets deeper into the disturbed mind of a man who eats other men than the entirety of “Cannibal.” While it’s somewhat respectable that Cuenca turns something as inherently wrong as cannibalism into little more than a protagonist’s fatal flaw, ignoring its greater implications and even how Carlos developed such a nasty habit makes for a film that can feel hollow.

There are moments in “Cannibal” that hint at a better film: That opening scene. A terrifying sequence in the middle of pitch-black night in which a naked woman knows the rolling waters away from shore that likely hold death are preferable to the mysterious man on the beach waiting for her in the other direction. A few revelatory beats in the final act. And the performers are all strong, especially Melinte.

Despite those moments, knowing as little about Carlos as we do makes for a film that frustrates. Why does he push out Alexandra but invite Nina in? As hard as it is to imagine consistency in the mind of a cannibal, there are actions that Carlos takes in regard to Nina that feel like screenwriting devices. Is he trapping her? Is he falling in love at first sight? Why has a killer of women found someone to be kind to? There seems to be deep sexual dysfunction, of course, but, like too many elements of the film, it’s never really explored. Ultimately, Cuenca keeps us in that opening shot—far from the action—and never makes the narrative switch to really give us the POV of a “Cannibal.” 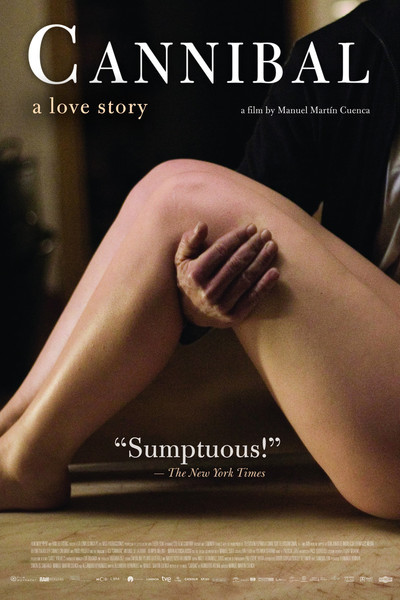