Old skid-row drunks are a lot of things. They are sick, they are lice-ridden, they are often prematurely senile, and sometimes they are so far gone they're not even tragic anymore, just wasted. Two things they are not is colorful and romantic, and when the Greek chorus of winos and bums marches onscreen in "Cannery Row," we know the movie is in trouble. Dressed in colorful rags, each one an unforgettable character, they think they're Mr. Doolittle and his pals in "My Fair Lady." They sleep in drain pipes at night because it's colorful.

I mention the bums first, not because I think "Cannery Row" has any obligation to provide us with an accurate portrait of skid row, but because they are symptomatic of what is wrong with this movie.

It was made, I suppose, out of a desire to find some larger truth by taking reality and stylizing it into colorful romanticism: To take a bunch of down-and-outers and find the essential humanity in them. Writers were always dredging the essential humanity out of the proletariat in the thirties and forties, and John Steinbeck, who wrote 'Cannery Row' and 'Sweet Thursday', the novels that inspired this movie, was no exception. I doubt, though, that even Steinbeck would be able to believe the extremes to which this movie goes. It populates its gigantic and impressive set (an indoor and outdoor replica of the Monterey docks) not only with lovable bums, but also with the requisite hookers with hearts of gold and with a guy named Doc, who dreams of making a breakthrough in marine biology. If life were like this, Norman Rockwell would have eclipsed Edward Hopper.

Doc is played by Nick Nolte, and he is the best thing in the movie. He provides a sound, solid, dignified performance, and there are times when we even believe he's a real human being who just accidentally wandered into this fantasy. Doc was once a big-league pitcher, and he had twenty-one wins and ten losses when he suddenly quit pitching and moved to Cannery Row. There is a guilty secret in his past, and it has something to do with The Seer, a loony, saintly bum who wanders the beach and serenades the dawn. Doc stares at octopuses all day, as if he could make a great discovery about them just by looking hard enough.

One day he meets Suzy (Debra Winger), a young girl with ambitions of becoming a floozy. Doc loves her, I guess. She loves him, I suppose. She goes to work in the local cathouse, where the madam is named Fauna, maybe because Flora was already taken. But the hookers and the bums all catch on about Doc and Suzy, and the middle of the movie is devoted to their ill-conceived schemes to get the two lovers together. All of this is photographed and written in such a mixture of the wistful, the whimsical, the eccentric, and the romantic that the characters don't even seem to be living; they seem to be auditioning. Occasionally scenes come to life; there's a real sweetness in a passage where Nolte and Winger boogie with one another.

The movie is almost always good to look at, thanks to Richard MacDonald's sets (he linked together two giant sound stages) and Sven Nykvist's photography. And Nolte and Winger are almost able to make their relationship work, if only it didn't seem scripted out of old country songs and lonely hearts columns. It's tough to pull off a movie like this, in the semi-cynical 1980s (it would have been impossible in the truly cynical seventies). I guess we no longer believe in the essential heroism of the little guy, and in the proposition that anyone can succeed with a little luck. In the movie, Doc dreams of making a big discovery and impressing those eggheads at the annual biology convention. Does he succeed? Well, I understand that the original Doc, a man named Ed Ricketts who was a drinking buddy of Steinbeck's, never did make that breakthrough and died in 1953 when his car stalled on the skid row railroad tracks and he didn't think to get out in time. Now that would have made an ending for the eighties. 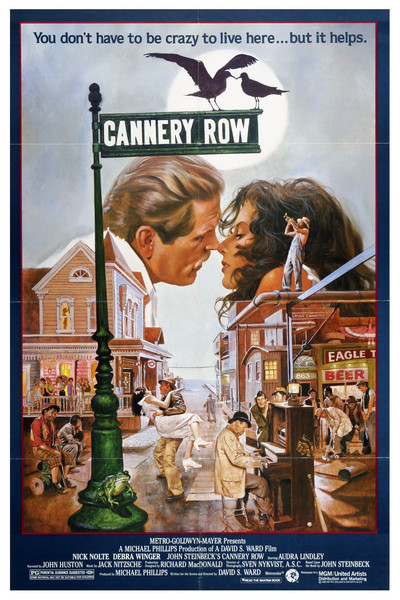