Is it possible the sequels to “Cabin Fever” and “Hostel” exist mostly to make the first films look better in comparison? Before horror nuts get defensive, I actually have some admiration for Eli Roth’s brand of visceral horror but the sequels to his films have been remarkably horrendous enough to engender conspiracy theories. "You thought that was bad? Get a load of this." “Cabin Fever 2” was reportedly taken out of the hands of Ti West and the result was a Frankenmovie without much personality or reason to remember it. While that may have been forgettable, the same can’t be said about “Hostel III,” a truly awful horror film with nary a redeeming value. Which brings us to “Cabin Fever: Patient Zero,” a film hitting theaters today and also available On Demand that promises to be a prequel to the first Roth film. And they are reportedly making another prequel too. How much do we have to praise Roth’s original films to make this stop?

The first act of “Cabin Fever: Patient Zero” is so defiantly stupid that I imagine most who rent it or struggle through it in a theater won’t care that there’s actually some material in the final act that clicks, mostly due to some incredibly strong makeup work. Yes, horror fans, this is one of those movies in which we praise the makeup instead of the plotting, characters, or scares. Still, in an era of CGI overload, it’s nice to see a bit of practical work in a low-budget sequel that impresses and some of the viscera and melting body parts when the shit (and everything else in the human body) hits the fan in the final act of “Patient Zero” is impressively executed. It’s just a shame that it’s in service of a movie that doesn’t deserve it.

At first, “Patient Zero” appears to be telling two stories, distinguished by strikingly different visual palettes. In one, Porter (Sean Astin) is taken prisoner by a group of doctors after he watches his son melt away in his arms from some unknown disease. Porter didn’t die. He’s the key to the cure. And so they trap him, keep him from civilization, and kind of torture him for reasons that are unclear other than there needs to be tension in this half of the movie.

There certainly isn’t any in the other half, which features characters and a plot that feels produced by a computer programmed with a Horror Cliché Generator. A group of guys on a bachelor party weekend head off to what is essentially a deserted island. One of the more annoying dudes and his gal-pal who has tagged along go snorkeling and see that all the fish look like they’ve gone through an oceanic blender. And then they start to form bumps, lesions and other things that we know will end in nastiness.

I don’t demand an inordinate amount of realism from my set-up acts for horror films but there is a line of what we should be willing to accept. These aren’t characters. They aren’t people. They barely even register as pawns to be fed to the horror machine. Most red shirts have more personality.

Worst of all, “Cabin Fever: Patient Zero” is a film without enough surprises. The very final 15-20 minutes have a bit of B-movie lunacy to keep this from the worst of the year (and that make it more inherently interesting than “Hostel III”) but everything that happens before that feels like it’s going through the motions. We know what’s going to happen before it happens and predictability is anti-horror. When the pretty girl gets the plague, we know that her bro of a beau is going to try to have sex with her anyway and, well, we know how that will go. Call it a callback or homage to the first film if you want or just call it lazy. Better yet, don’t call it anything at all. Just don’t see it. 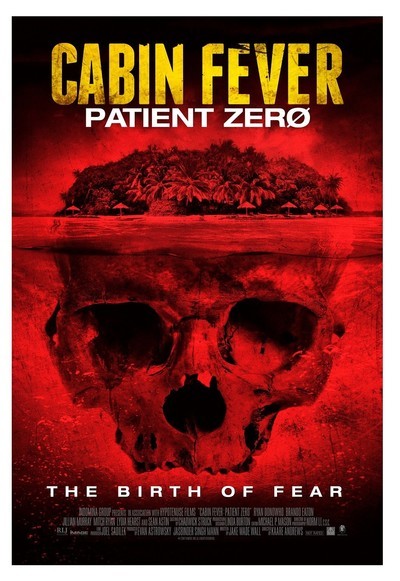