An Arizona teenager (Alex Kersting) steps on the scale at his doctor’s office. It reads 424 pounds. He takes his cell phone out of his pocket and hands it to his mother to eliminate any extra weight. The scale reads 423.3 pounds. Adapted by writer/director Paul A. Kaufman from the novel by Erin Jade Lange, “Butter” is the well-intentioned but overly preachy story of a bullied high school student.

Everyone calls the teenager “Butter” except for his mother (Mira Sorvino), who calls him “Baby.” His father (Brian Van Holt) does not call him anything because he barely speaks to him. (Since his real name is not revealed until the end and that is how he refers to himself, I will continue to call him that as well.)

Butter is obese and high school students are mean. His mother tries to comfort him with food. He admits he barely tastes it anymore, “but I had to keep going to relieve my pain.” His non-edible comforts are his saxophone (he is a talented jazz musician) and his Catfish-style online relationship with the prettiest girl in school, Anna (McKaley Miller). He tells her he is a soccer player at a private school. He believes, or he believes that he believes, that he is his authentic self online. But he's hiding more than what he looks like.

Impulsively, Butter decides to declare online that he will literally eat himself to death on New Year’s Eve. All of a sudden, everyone at school sees him differently. They pay attention to him. They talk to him. They think he is interesting. They suggest he password-protect the site to keep parents or teachers from discovering it. His classmates begin taking bets about what he will do, what he will eat, and whether he will succeed. Without trying, without even noticing, he begins to lose weight. He tells us he has replaced his appetite for food with an appetite for internet attention.

That is the problem with this film; it tells rather than shows. It relies too heavily on narration and includes another character who exists solely to tell us what the movie has already shown us. It's clearly sincere and wants to send a powerful message about bullying. But it is not as effective as it wants to be because it is heavy-handed in a way that has nothing to do with Butter’s weight.

One good point made by the film is that Anna, too, is drawn to an online relationship because it is not based on her physical appearance. And another is that bullying does not have to involve physical intimidation or violence or even insults, though all of those are used against Butter. Sometimes bullying can also be disguised as encouragement. Some of the people who appear to be befriending Butter are taking a gruesome pleasure in seeing him plan his own suicide, even recommending additions to his menu. Though every student at the school seems to follow what he's doing, no one tries to talk him out of it or gets an adult to intervene. “They weren’t mocking me,” he tells us. “They were cheering me on.” But they were cheering on the spectacle, not the person.

We are supposed to believe that some of Butter’s classmates develop genuine friendships with him, and the movie has some fun with a “bucket list” outing. And yet the best explanation anyone can come up with about why no one tried to prevent him from harming himself is that they didn't think he would do it, even as they were telling him what to add to the New Year’s Eve menu.

The movie overlooks its own strongest points, especially the way that Butter is far from the only teenager at the school who feels invisible or demeaned, creating an inability to notice someone who wants very much to be his friend. Instead of exploring the more complex dynamics of adolescent social structure, it limits itself to an artificial set-up and a superficial level of storytelling, more afterschool special than feature film. 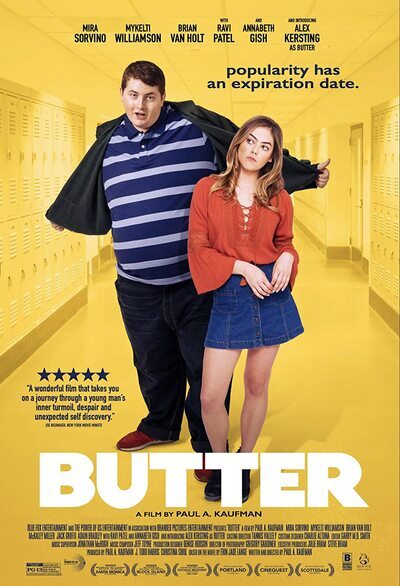