If you're not paying attention when "But Always" begins, you might think it's a perfectly acceptable sleeping aid. Until its last 15 minutes, "But Always" is a trite, and slavishly inoffensive romantic drama. First-time writer/director Snow Zou lulls viewers into a false sense of security by dint of being completely unaware of how human lovers talk to each other. While that isn't a Hague-worthy crime against humanity, it isn't a good thing, either. But once Zou's films gets to be about what it's about, we see that its most crucial plot point—the one that casts an ugly shadow over the film's preceding events—involves 9/11. I know, that's a major spoiler, but this film deserves it.

I can't talk about "But Always" without mentioning its tactless eleventh hour revelation, especially since said climax is set up in the film's first scene: we're told the film is set in "New York, 2001." Everything in "But Always" leads to and from this monumentally tasteless tear-jerking moment. Like the equally offensive disastromance "Remember Me," "But Always" is sappy, dopey, and dumb until it gets desperate, and uses 9/11 as a means of strong-arming viewers into loving its characters, and appreciating their own loved ones more. Call me crazy, but I don't think it's a good idea to use a real-life terrorist attack to force viewers to feel.

Until Zou deploys nuclear option of rom-com twists, "But Always" meanders from one flashback to the next. After we meet struggling artist Anran (Yuanyuan Gao) in 2001, she takes us back to Beijing in 1976. She then details her decades-long, will-they-won't-they relationship with Zhang Yongyuan (pop star Nicholas Tse), a scrappy, poor kid raised by a provincial—but loving!—uncle (character actor god Suet Lam). Anran and Zhang ostensibly share a special bond created by their mutual lack of a mother. As the years pass, she moves to New York to study while he stays in Beijing, and becomes a successful international businessman. Eventually, there is a misunderstanding between Zhang and Anran, and they break it off because of bad timing, and a general lack of communication.

This is all tediously formulaic, but that last point is especially cringe-worthy: apparently, Zhang is too proud to talk to Anran like she's a partner, or even a human being with concerns, worries, electric bills, etc. Instead, he lets their relationship fall apart because he has to make like Byron and pretend he has mysterious, noble reasons for ditching her. So when Zhang and Anran inevitably re-unite, he smiles impassively, knowing something that he won't let her know. She sulks, and wonders what to do now that she's found a new beau. Unfortunately, that new guy only exists in "But Always" in order to provide the film with a canned menage a trois. He moves the plot along without mattering.

Everything from the film's bright, over-exposed look to its sulking, emo dialogue coyly leads us to Zou's anti-resolution finale. For example, the scene where Anran talks to her dad for the last time, and he gives her an heirloom watch, is toxically bathetic. And the scene where she naively confesses to Zhang that Manhattan initially "felt like a forest made of cold metal" to her is equally barftastic. And don't get me started on the tepid, over-edited sex scenes: there's no chemistry between Gao and Tse because their characters never let their guards down long enough to connect. Then boom, it's tragedy time. By pushing inexorably towards a tasteless anti-climax, "But Always" deserves every bit of scorn heaped upon it. 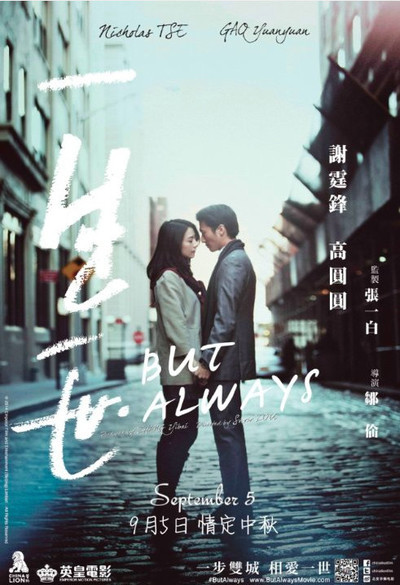