This movie is appalling. It made me want to rub my eyes. Was it possible that the great Billy Wilder, whose credits include such sublime comedies as “Some Like It Hot” and such unforgettable satirical dramas as “Sunset Blvd.,” could possibly have made a film this bad?

“Buddy Buddy” is very bad. It is a comedy without any laughs. (And, yes, I mean literally that it contains no laughs.) But it is worse than that. It succeeds in reducing two of the most charming actors in American motion picture history to unlikable ciphers. Can you imagine a film that co-stars Walter Matthau and Jack Lemmon and yet contains no charm, ebullience, wit, charisma even friendliness? This whole movie is like one of those pathetic Hollywood monsters drained of its life fluids. The plot is simple and is developed at redundant length. A grouchy old Mafia hit man (Matthau) is knocking off a series of witnesses. As the film opens, he disguises himself as a mailman and plants a bomb in a mailbox. It is one of those rural-style mailboxes with a red flag that snaps up, and it looks a little strange out by the sidewalk in Beverly Hills, but never mind: Seconds later, he's disguised as a milkman, delivering poisoned milk. Are there still milkmen?

This early in the film, we're still asking such logical questions. Later, the despair sets in. Matthau checks into a hotel across from a courthouse so that he can set up a sniping post and assassinate another witness. Lemmon checks into the room next door so that he can kill himself. He wants to commit suicide because his wife (Paula Prentiss) has run away with a goofy sex therapist (Klaus Kinski).

The gimmick is that Lemmon's suicide attempts keep calling attention to the floor of the hotel where Matthau wants to maintain a very low visibility. So Matthau is forced to become Lemmon's friend, of sorts, in between episodes of chloroforming him and tying him to chairs.

None of this plot description even suggests the dismal morbidity of “Buddy Buddy.” It is possible, I suppose, that this selfsame plot and even these identical actors and maybe even the same director could have produced a funny movie. That is not the case this time. Basically, we are invited to watch two drudges meander through a witless, pointless exercise in farce.

Wilder, Lemmon, Matthau. They have given us wonderful moments of movie comedy. Their credits together include “The Fortune Cookie” and the “The Front Page.” Wilder has also directed Lemmon in the “The Apartment,” “Some Like It Hot” and “Avanti!.” Some of those titles represent great movies. Some, such as “Avanti!,” were disappointing. “Buddy Buddy” is incompetent. And that is the saddest word I can think of to describe it. 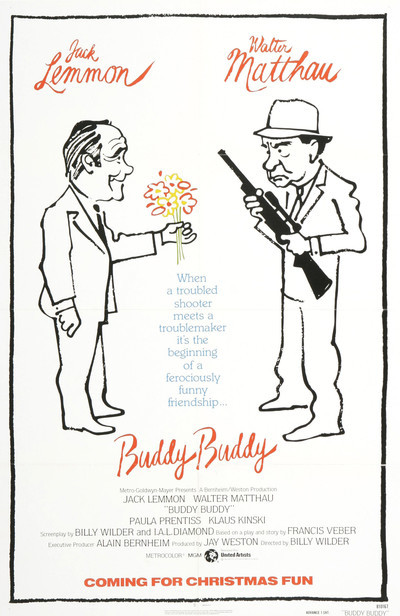