A 63-year-old Swedish woman named Britt-Marie (Pernilla August) stands at the window. But she isn't enjoying the view. She is looking at the glass, not the landscape. What she is concerned with is dirt, more specifically eradicating it from any part of her immaculate home. What matters to Britt-Marie is habit, routine, and order. She likes lists. She likes to make sure her silverware drawer is meticulously organized. A friend who once offered to help in the kitchen put the knives and forks in the wrong order and was never invited again. "A presentable home tells everything about you," she assures us. She is right, but perhaps she is not listening to what her spotless, monochromatic house says about her.

Doing the laundry, making dinner, knowing what to expect are what make Britt-Marie feel safe. As a young girl, she dreamed of going to Paris with her free-spirited sister. But now she finds travel stressful. When her husband's business takes him out of town, she stays home. When he is at home, he watches football (soccer). She has no interest in sports and would rather keep the house tidy, usually with her favorite cleanser. "I've never in my life felt the urge to kick something," she says. "Baking soda solves more of the world's problems than football."

It depends on what you mean by problems. Baking soda can get out stains, but it cannot protect Britt-Marie from wrenching disappointment when she is confronted with her husband's affair. She leaves him and takes the only job she is offered: a temporary position as a youth leader at a soon-to-be-closed recreation center in Borg, a remote and struggling small town. The job includes coaching a soccer team of 10-year-olds. Britt-Marie does not know anything about soccer, coaching, or children. But she does know about cleaning, and the rec center is a mess, covered with graffiti on the outside and filled with grime and clutter on the inside. That gives her a place to start.

"Britt-Marie Was Here" is based on a novel by Fredrik Backman (A Man Called Ove), whose themes often include cranky people who isolate themselves and community sports that bring people together. Thankfully, he and director Tuva Novotny keep the characters astringent and his tone wry, so it never gets cuddly or cloying.

Britt-Marie is so stoic for much of the film that we are not sure she really understands what is happening to her. Does she realize, in accepting a job as a coach, that people will expect her to know something about the game? Or that telling 10-year-olds to clean up the glass from a window smashed by their soccer ball might not be a great idea? Or that moving to a new town where she does not know anyone will mean that she has to find a place to live? But she finds a handyman to fix the window and Sven (Anders Mossling), a warm-hearted policeman, suggests that the visually impaired daughter of the former coach -- a former soccer player herself -- might have a room available. She also learns that there is a difference between "scrawling" marks on a wall and graffiti. One of the kids on the team explains that scrawling is just making marks, but graffiti shows that you exist. It is not dirt to be attacked with baking soda; it is a statement. She sees that sports can have lessons about feeling like part of a team and about being inspired to turn things around when you are behind. Sometimes soccer is better than baking soda.

August is especially good in Britt-Marie's interactions with the Borgians, from the jack-of-all trades who runs the local store to the young man who wanted the coaching job to the city councilman who wants to close the rec center, even though his son is on the team. August shows us Britt-Marie listening thoughtfully, each new encounter filed away for her to consider and use when the time is right. We see how the light begins to turn on behind Britt-Marie's eyes as she stops trying so hard to maintain control. She does keep up with her lists, though.

We begin to realize that Britt-Marie has understood more than she lets others around her know. Her matter-of-fact responses to the ragtag kids on the team give her an aura of unpretentious authenticity they respond to. And Sven sees a warmth in her that she forgot she had. She finds herself confiding in him. "My husband said I had no imagination. You need a vivid imagination to pretend that you don't know what's been going on for years." In Borg, instead of using her imagination to hide from reality, she learns to imagine a better life for herself, and then make it a reality. 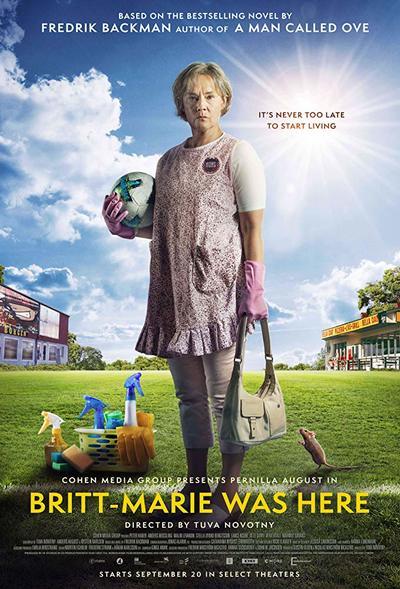