Bring Your Own Brigade

Lucy Walker’s “Bring Your Own Brigade” is not the documentary you expect it to be. For years now, climate change warnings have been a documentary genre unto themselves, as new information about what we’re doing to this planet filters through non-fiction filmmaking and to audiences that, sadly, don’t seem to be heeding enough of their warnings. A documentary about the increasingly deadly and destructive wildfires in California feels likely to fall into this genre, but Walker’s film is more ambitious than a commentary on how rising temperatures makes fire-fighting more difficult. "Bring Your Own Brigade" is a piece of investigative journalism that digs into the many reasons California has become increasingly dangerous, including, yes, climate change, but also human denial and general stubbornness. As concerns over increased transmission of the Delta variant rise, there’s something disarmingly timely about a documentary that’s really about how often people fail to operate in their own best interests, refuse necessary changes, and fail to plan for not only the worst-case scenario but the likely one. Walker’s film might have worked better as a docuseries—one feels its two-hour length—and she has a habit of over-writing some of the narration, but it’s still a detailed piece of work, a surprising angle on a terrifying new reality about living in certain parts of the world, and an inquiry as to whether or not we’re going to do anything about it.

The first third of “Bring Your Own Brigade” is one of the most intense and terrifying things I’ve seen all year, presenting the devastating impact of the 2018 Camp Fire, the deadliest and most destructive wildfire in the history of California. In up-close footage captured in Paradise, California, the epicenter of the blaze, we witness as cars smash into each other trying to escape a fire that would kill dozen of people. It looks like literal Hell. Walker was making a short film about the Thomas Fire in late 2017 when the Camp Fire and Woolsey Fires broke out, reshaping her film and leading to a piece of work that feels immediate and terrifying. Her gift is in drawing interesting insight from the people she meets, and she talks to people from all across the spectrum of this issue, including survivors, officials, and experts.

My main concern was that “Bring Your Own Brigade” was going to be two hours like the opening scene of a koala crying due to its severe burns in a hellish landscape. It’s not that movie. After the you-are-there intensity, Walker shifts to analysis not so much of how this happened but how to stop it from happening again. The truth is that simple changes in the landscaping and construction in this part of the world could greatly impact how these fires spread (also, stop having gender reveal parties, people), but residents, after dusting off their belongings, simply refuse to make many of the recommended changes. Walker sits back and lets things unfold, but also offers clear commentary through her editing. When an official states how much of a difference it would make to change the gutters in cities like Paradise so they don’t gather as much fire-spreading debris, and then a city council votes that idea down, it’s hard not to be enraged.

However, Walker never loses the human throughline, often returning to the home of a Paradise resident who lives with his blind mother and believes that his deceased wife used her angel’s wings to save their house. She’s constantly reminding viewers of the human beings impacted by these fires and even just living with the threat of them. A different survivor returns to her home and has a memorable breakdown, saying, “I know it’s just stuff, but it was MY stuff—my children’s memories.” I wish everyone who makes decisions concerning fire safety in California—and climate change around the world—could watch the emotion overtake this woman before voting on policies that impact both our entire planet and those caught in the eye of the firestorm.

Now playing in select theaters and available on CBSN and Paramount+ on August 20. 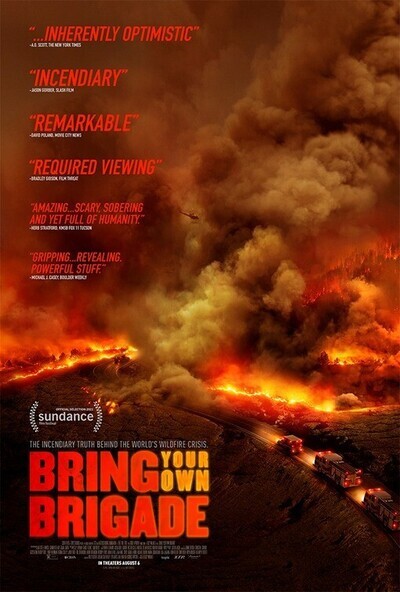 Marily Woodhouse as Self