"Your game is conservative." "And your game is reckless." This end-stop exchange happens in "Break Point" when two estranged tennis-playing brothers (Jeremy Sisto and David Walton) decide to pair up again as a doubles-team and take a stab at qualifying for the U.S. Open. It's tennis-playing-style as (obvious) metaphor for human relationships. Directed by Jay Karas, and with a script by Sisto and Gene Hong, "Break Point" is a family-tennis drama with a plot that could be described as "conflict-lite." All problems are telegraphed from the get-go, giving the film's opening scenes that weird vibe where characters spout exposition at one another. Films often descend into soap opera when the heat is turned up underneath conflict, but "Break Point" (effective performances notwithstanding) could have used a bit more of that heat, as well as a deeper interest in what tennis means to those who play it.

Jimmy (Sisto) is a 35-year-old tennis player who can't find anyone to partner with him anymore because he's undisciplined, aggressive, and a self-destructive party animal. He was once a teenage champion and then went pro, but his career didn't work out as planned. Darren (David Walton), Jimmy's brother and one-time doubles partner, has been a substitute teacher for seven years, and lets off steam hitting around a tennis ball by himself. His only friend appears to be Barry (Joshua Rush), a little kid with a sad home life and questionable outfits. Barry starts out as one of those annoying children who only exist in movies: precocious creatures who draw a sad-clown adult out of his shell by dispensing wise advice. Jimmy and Darren's dad is played by J.K. Simmons, the kind of actor who can fill a simple line like "It's great to see you two together again" with the entire emotional theme of the film.

Jimmy, who has alienated everyone else in tennis, approaches his brother to partner with him for the pre-qualifying tournaments for the Open. Darren is wary but succumbs, not before making Jimmy promise to get his act together, stop drinking, and shape up. Jimmy moans and whines, throws massive John McEnroe-ish tantrums on the court. And of course there is a training montage, because what is a sports movie without a training montage? (I have a soft spot for training montages, so my comment is meant sincerely.) Once the men commit, they are single-minded about it to the point of obsession. They want to kick ass and win. As Martina Navratilova is supposed to have said, "Whoever said, ‘It’s not whether you win or lose that counts,’ probably lost."

The tennis sequences are where director Karas needed to step up his own game. Both Sisto and Walton are believable as tennis players (probably not to a pro, but good enough). Their serves appear powerful, their forehands/backhands look confident. But the tennis scenes (and there are a lot of them) don't create the necessary illusion that we are seeing actual tennis being played; there's no visual sense of tennis' exhilarating parabolae and power. One of the real strengths of "Miracle," the story of the 1980 Olympic hockey team, was director Gavin O'Connor's decision to cast college hockey players in the main roles, and then coach them in the rudiments of acting. The young inexperienced actors rose to the occasion all while playing pretty believable hockey. There's an Uncanny-Valley thing that happens sometimes when actors play professional athletes. You feel the artifice of it: it doesn't "look right." The best tennis moment in "Break Point" comes early on when Sisto and Walton stand opposite one another, close to the net, and bat the ball back and forth with no bounces in between. It's shot with no cuts. It feels real because it is real.

While the various plot-lines (Jimmy's struggle to get his act together, Darren wanting to have a more interesting life, Barry wanting to be useful) are re-treads of pretty much any movie made in this vein, the actors bring some spontaneity and weirdness to their characters. Sisto has a wild and cynical essence as an actor and a way of squinting his eyes suspiciously at people as he tries to perceive their inner motivations. As Jimmy, he's a wreck, burping, yelling, flailing around, tantrum-ing out, all as Walton stands his ground in a pissed-off and yet thoughtful way.

In "The String Theory," David Foster Wallace's 1996 essay about Michael Joyce, a rising tennis star competing in the "Qualies" for the Canadian Open, Wallace (who had played tennis competitively as a kid) observes after watching some of the players, even low-ranked ones, "I could not meaningfully exist on the same court with these obscure, hungry players. Nor could you. And it's not just a matter of talent or practice. There's something else." It's that "something else" that obsessed David Foster Wallace, the intersecting variables of athleticism, focus, endurance, and drive. "Break Point" is predictable and yet sometimes very funny. It's a mild-mannered film, strange considering the ferocious nature of tennis itself, the sport that supposedly holds "Break Point" together. The film takes almost no risks with its material, although there are some pleasurable spots along the way. There's something missing, though, that "something else" that David Foster Wallace talked about. 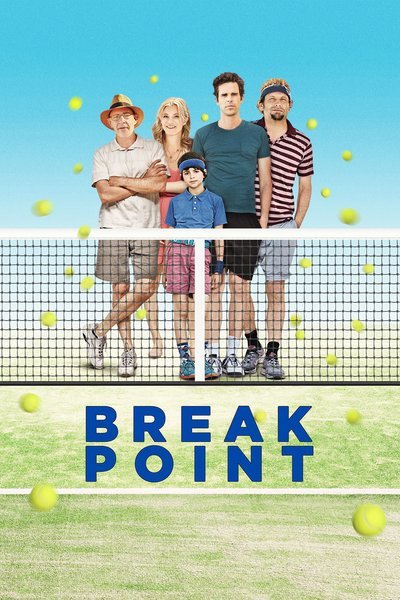