Daniel Duran’s “Bravetown,” a fish-out-of-water tale about a troubled New York City boy exiled to corn-fed North Dakota, is a film for teenagers, especially those with a taste for teen-movie clichés put across with plush production values and a complement of high-energy dance numbers. Older audiences are likely to find the film less amusing than risible.

It begins, rather deceptively, with a De Palma-worthy moving-camera shot that follows a hip-looking black dude as he navigates his way through several levels of a packed, pulsing New York nightclub, pausing occasionally to exchange high fives with other dudes. The guy eventually reaches the club’s deejay, a blond kid he calls “Joshy boy,” who accepts pill after pill from him until, eventually, he collapses and ends up in the hospital.

Though but a teen, Josh (Lucas Till) is reputedly one of the country’s hottest deejays. Apparently the job doesn’t pay enough to allow him to live apart from his stressed-out mom (Maria Bello), whom he curses out for not leaving enough milk in the fridge, among other sins. Mom is relieved of her parental responsibilities, though, when Josh’s overdose lands him in court and the judge sentences him to go live with his long-absent dad in the Midwest. (That New York juvenile-court judges have such creative sentencing powers is but one thing you can learn from “Bravetown.”)

The small North Dakota town Josh arrives in is picturesque enough for a corn flakes commercial, or indeed an Army recruiting ad. Josh is picked up and given lodgings by his dad, but the two seem to exchange fewer than a dozen words after their initial meeting, the father-son relationship being one of the few instances where Oscar Torres’ script misses a chance for overwrought emotional conflict.

Though the New York scenes gave no hint of it, Josh is a high school student, and when he starts classes in his new town, the other kids are understandably curious about the guy they’ve heard is a famous deejay from back east. Meanwhile, Josh’s sentence means that he must pay regular visits to a therapist, Alex (Josh Duhamel). For a while these sessions entail little more than the two eating pizza and watching soccer on TV, though Josh significantly learns that Alex was a soldier who lost his best friend in combat.

As it happens, everyone is this town seems to have lost someone to military service. This is explained to Josh in an exceedingly weird nighttime scene where his classmate Mary (Kherington Payne) invites him to join her in lighting lamps on a memorial tree that’s adorned with countless medals won by the town’s fighting folk. Though the element of universal military loss threatens to introduce a “Twilight Zone”-like uncanny-ness to the film, its main purpose is to convey a simple idea: Everybody hurts.

That’s certainly the case in Mary’s family, which lost its eldest son to America’s war in Iraq. The resulting devastation has affected everyone, but especially Mary’s mom (Laura Dern), whose condition can only be described as severely addled. She pops pills, sleeps too late to fix her kids’ breakfast, and sometimes doesn’t seem to realize that her soldier boy is dead – a state of grief-induced dementia that occasions one of Dern’s most expertly nutty performances.

The effect of all this is to make angst the center of practically every personality and relationship. It’s a very adolescent (or therapy-centric) worldview: Everyone’s in pain, damaged, wounded. Everyone needs healing, love…or, just maybe, catharsis.

That’s where Josh’s musical abilities come in. His high school has a dance team – including Mary, of course – and they’ve been in a long funk, losing every competition. Then Josh accepts their invitation to supply some new beats and they’re instantly transformed. (Two more things I learned from the film: High schools have competitive dance teams, and they come up with their elaborate routines thanks only to the inspiration of a great deejay; no choreographer is involved.)

This is the kind of aerobic-intensive “dance” that used to be called calisthenics, but never mind that. Josh’s beats save the day. You’ll have to see the movie to see how that, plus the boy’s fixation on Oliver Stone’s “Platoon,” not only gets the kids to the state championships but also heals the town from its long obsession with dead soldiers. Really.

As even a brief synopsis might suggest, there’s a silliness to “Bravetown” deep enough to make “Footloose” look like grand opera by comparison. But it’s all put across with equal measures of un-winking sincerity and technical polish. First-time feature director Duran made his name with music videos, and while his skills in that department are evident here, he also gets nice work from cast members including comely lead Lucas Till, who’s mainly asked to look sullen and too-cool-for-school but does that assuredly.

Incidentally, Duran and cinematographer Angel Barroeta are native Venezuelans, while screenwriter Torres was born in El Salvador. That may help explain why their America seems to owe less to lived reality than to the mythic visions of movies, music videos and commercials. And though Torres’ story imagines a world without choreographers, the film’s choreographer was Brian Friedman. 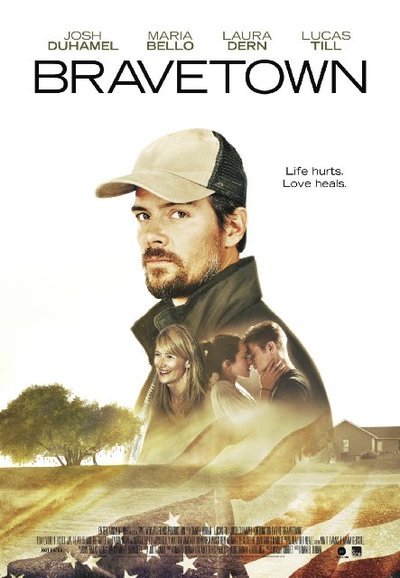 Rated R some language, drug use and brief sexuality

Lucas Till as Josh Harvest