With its combination of dysfunctional family drama and road trip hijinks, “Braking for Whales” practically announces its desire to be considered the next “Little Miss Sunshine.” While I can understand why others might have liked that 2006 film even if I did not happen to myself, this pseudo-successor is such a bizarre, cloying and obnoxious exercise in aggressive quirkiness that one comes away from it feeling less angry than baffled. Evidently, no one at any point during its development and production was able to recognize its seemingly obvious flaws and do anything to avoid them.

As the film opens, Star (Tammin Sursok, who co-wrote the film with director Sean McEwen) returns to her hometown in Iowa to reunite with younger brother Brandon (Tom Felton) on the occasion of their mother's death. It doesn’t take very long for old resentments to simmer up between the two—she jabs at him for his unwillingness to admit that he is gay (he's in the middle of a self-help program allegedly designed to make him heterosexual) and he retorts by bringing up her ramshackle lifestyle and the child that she has all but abandoned—by the time it comes to the reading of the will, they are ready to go their separate ways again, possibly for good. Having anticipated that, Mom’s will has one specific stipulation if they are to inherit her estate—a lifelong whale lover, she wants the two of them to inter her ashes inside of a whale within 48 hours and they are not allowed to use a plane. Both needing the money, the two pile into Mom’s old Winnebago and set off on a road trip to a Texas aquarium to fulfill her wishes and maybe—just maybe—work on their issues with each other and themselves along the way.

With a premise as batty as that, the only way a film like “Braking for Whales” could possibly succeed is if it finds just the right tone and maintains it for the entire running time. Needless to say, the film whiffs that right from the start, veering from broad comedy to heartfelt drama without inspiring anything other than full-body cringes from viewers. Even if you set aside the absurd premise of putting the ashes in the whale, not a single scene in this film comes across as anything other than contrived—there are times when it almost feels like a deliberately over-the-top spoof of stories involving estranged family members coming together again. The two central characters are both fairly unendurable—their concerns are presented in the most obvious of terms, and their incessant banter gets so obnoxious after a while that strict social distancing will seem a lot more appealing.

In a film filled with awful scenes, it seems almost impossible to single just one out. There is an ugly sequence where the two visit the home of their estranged and deeply conservative aunt and uncle (Wendi McLendon-Covey and David Koechner) that is supposed to serve as some kind of satire, but which ultimately more appalling than amusing. There is also a subplot in which Star finds her long-suppressed mothering instinct reignited when she and Brandon accidentally run over an otter mother and decide to take her two children with them. And at one point, Brandon goes to a bar and winds up brutally beating up a guy who tries to pick him up—this would be bad enough on its own but it becomes exponentially worse as the screenplay tries to position the incident as some kind of cathartic breakthrough for Brandon to help him accept who he really is. But if I had to pick just one, I'd go with the conceit that the rebellious Star has an erotic fixation on none other than George W. Bush. This pops up in the film's very first scene—Star is pleasuring herself to a copy of his autobiography in the bathroom of a plane—and bewilderingly becomes a running gag throughout, culminating in a payoff that will leave even the staunchest liberals feeling pangs of sympathy for W.

“Braking for Whales” is the kind of film that is so ridiculous in conception and excruciating in execution that some brave souls may find themselves tempted to see if it really is that bad. Trust me, it really is. It just isn’t funny, it isn’t touching and it has virtually no insights into what might pass for believable human behavior. By the time "Braking for Whales" gets to its climactic scenes at the aquarium where they plot to feed the orca Mom’s ashes, most of you will be hoping that the creature saw “Rust and Bone” and will act accordingly.

"Braking for Whales" premieres on Digital and VOD today, 4/24. 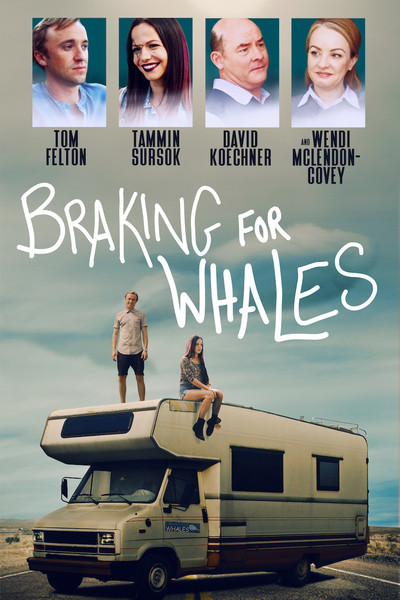