In a 2019 interview for a mixed martial arts (MMA, that is) website, Edson Barboza, a real-life MMA star who plays a key role in this motion picture, said “MMA fans will really enjoy it.” This assessment is so sufficiently to-the-point that I’m almost tempted to reproduce it hundreds of times, “All work and no play make Jack a dull boy” style, and submit it as my review. But my editor don’t play that.

So let us consider “Born a Champion” from the perspective of a non-MMA-fan. It so happens I am this thing. I don’t have anything against the sport (I don’t? Well, I mean, if I gave it any thought I actually might, but never mind), but it’s just not my bag.

It is, apparently, the bag of actor Sean Patrick Flanery, who wrote the movie and stars in it and is a black belt in jiu-jitsu, which is the fighting method depicted and practically proselytized for in the movie. Whether I should call this movie a “passion project” or a “vanity project” is something I’ve thought about, and since it appears from the evidence of the fight scenes in this film that Mr. Flanery could render me unconscious within half a minute of being introduced to me, “passion project” is the way to go.

Directed by Alex Ranarivelo (who co-wrote with Flanery), a bit of a veteran in sports films, “Born a Champion” takes a pseudo-documentary tack from the very beginning. In a window boxed frame, tattooed Rosco (Maurice Compte) speaks of his first meeting with Desert Storm vet Mickey Kelley (Flanery). It was in a parking lot, and some toughs were giving Rosco a hard time, and in a racist way, too. Mickey took three of them out, Rosco recalls in awe, “without throwing a punch.” And then the two became such great friends that Rosco let Mickey nickname him “Taco.”

Mickey’s non-punching method derives from Brazilian Jiu-Jitsu, which has a specialty move that lets you, well, render your opponent unconscious within half a minute of being introduced to them, if that’s what you’re into. Seems to work every time, too. Mickey is soon seen flying to Dubai, teaching some sheikh’s kids, and rescuing an American woman from the clutches of an industrialist who wants to turn her into a prostitute. The woman, Layla (Katrina Bowden) is swept off her feet and follows him back to L.A. (San Pedro to be exact) even though she lives in North Carolina.

Narrator Rosco/Taco then informs us “Those two were f**ing …” Now if you guessed that the next two words would be “like rabbits,” then shame on you, you dirty dirty person. No. The line is “Those two were f**ing inseparable after that.” And soon they’re parents, too, and very good ones. I bring this up only because it’s kind of curious that Flanery and company maintained the language at a level that was sure to get it an “R” rating, because in almost every other respect this is a very wholesome story. It’s not entirely “Rocky”-esque but it is pretty faith-and-family in its stresses.

But it is, also, very martial arts-detail oriented. The story takes the aging Kelly to a pro MMA tourney, hovered over by Dennis Quaid’s Mason, a manager trying to legitimize the sport. Kelley’s relatively advanced age solicits skepticism, but he acquits himself beautifully until Barboza’s character steps in the ring. And beats Kelley in a bout that ends up leaving him with a detached retina and other vision-related complaints. “He would never be medically cleared to fight again,” Rosco tells us.

So how does Kelley end up in a rematch with Blaine five years later? And how is it discovered that Blaine cheated in the first bout, with the evidence going viral on the early internet? Flanery and Ranarivelo lay the groundwork for all the plot turns pretty well, but of course the destination is predictable. And actually, Rosco tells the audience the outcome of said rematch in the first ten minutes of the movie.

That “Born a Champion” is able to maintain suspense despite that is a testimony to craft, to be sure. It’s impressive enough to earn the admiration of a lay person such as myself. But those who are not just disinterested but out-and-out uninterested when it comes to jiu-jitsu moves and their analysis should be aware that watching Ranarivelo's film will give you more of that than you may need. 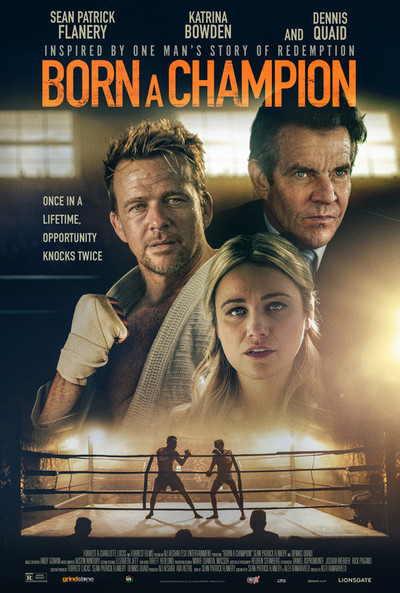 Ali Afshar as The Sheik