The multi-hyphenate writer-restaurateur Eddie Huang is adding a director credit to his resume. With his debut feature “Boogie,” Huang explores some of the tensions in the second-generation American experience—the all or nothing pressure to succeed and make your parents proud, straddling two cultures when it feels like you fit into neither. Not all the pieces of "Boogie" fit neatly together, but it’s a film about a family that doesn’t fit inside the box of a standard inspirational immigrant story. The parents in this movie bicker often—dad (Perry Yung) just got out of jail and mom (Pamelyn Chee) can be a ruthless disciplinarian. Their only son, Alfred "Boogie" Chin (Taylor Takahashi), is angry in the way that young people get when doors are closed on them, seeing limited ways forward in life and being forced to do something they don’t want to.

As a character, Boogie is a tough act to get into. His macho exterior makes it difficult to show any signs of vulnerability or reflection. He’s stricken with the tone-deaf dating instincts of a young guy who has never talked to girls before. Takahashi’s monotonous delivery of “You have a pretty vagina” to his love interest in the movie is an all-time cringe moment. Sadly, his performance largely stays at that flat pitch, even with less obtuse dialogue. In heated arguments with his parents or when angrily walking through Flushing, Queens, he's always on guard against the outside world. He's someone who looks outwards but not in, someone who doesn’t really connect with others so much as he locks horns with them. Everything seems like a target, and many of his problems seem to be messes of his own making. Doesn’t it ever get tiring to be a tough guy?

Boogie’s dad, Mr. Chin, comes home from jail with an impossible scheme: to get his son in the NBA. Somehow the only way to accomplish this is to beat a Black player in Brooklyn named Monk (Pop Smoke). It brings an uneasy racial dynamic into the story: Boogie has to be better than his Black rival in order to make his parents proud and get ahead in life. Making matters worse is the way the characters outside the Chin family home are depicted. While the dysfunctional family is given space for ambitions, doubts, and feelings, Monk and Boogie’s crush, Eleanor (Taylour Paige), are both reduced to stock characters. Monk is the villain who, of course, has a history with Eleanor, which tips Boogie’s insecure masculinity into a crisis. Although Paige makes the best out of a bummer role, her character is pushed into an unrealistic relationship with Boogie after he essentially annoys her until he can no longer be ignored. His misogynist anger towards her after it’s revealed—gasp! She’s dated other guys—should be grounds for her to never speak to him again. Alas, she’s stuck with him and so are we.

Like Paige, Chee makes the best out of a limited role as Boogie’s volatile mother. While Boogie and his dad seem to be on the same angry wavelength with the outward charisma of immovable stones, Chee’s Mrs. Chin is even more ready for outbursts and nakedly ambitious for her only son to get ahead in life. It's a little baffling that Huang hints that she may be having an affair with her son’s new manager, Melvin (Mike Moh), who’s pushing him towards the Chinese leagues and accidentally bruising a cultural sore spot for Boogie, like adding undue tension where there’s already plenty of pain for Boogie. The insinuation is that he can’t hack it in this country, so he has to go back to his parents’ old world (which is technically Taiwan, but as his parents joke: it’s complicated) to find success. Despite whatever unclear moral failings Mrs. Chin may have, Boogie may brood and talk back to his coach, but his mother is always ready with a slap and a sharp tongue to push him back in place. Mr. Chin may have been the one to cook up the NBA as a ticket for their son’s success, but Mrs. Chin is the one who will stop at nothing to make it happen.

“Boogie” is strongest when it explores the real-life anxieties of labels and stereotypes. Boogie worries about others’ expectations of him and Mrs. Chin frets about how a visiting coach will perceive their modest home. In one scene with Eleanor, Boogie muses over the significance of beef and broccoli and how it represents his background. These moments of self-exploration make up for some of the script's denser dialogue, its simplistic rivalry, and the film’s messy cinematography and editing of Boogie’s basketball games.

For Huang, “Boogie” feels like its own redemption narrative. It’s the story of an Asian American kid who loves Black culture (and the movie is filled with slick hip hop tracks to accompany Boogie’s journey), feels like a misfit, resents the pressure put on him, and bucks the model minority myth. (Huang famously fell out with the creators of “Fresh Off The Boat,” the TV show based on his memoir, after they made it into a more family-friendly comedy.) With “Boogie,” Huang aims to show how the Asian-American experience is not always one of punchlines and appealing to white audiences. It can also be about making mistakes, finding your own path, and rebounding from setbacks. It can be about existing outside racist stereotypes but it can also be imperfect. "Boogie" is a personal project through and through, from a stop at Huang’s now-defunct BaoHaus restaurant on 14th Street, to Boogie’s love of hip hop culture. It may not come together as perfectly as Boogie’s ode to beef and broccoli, but it’s food for thought. 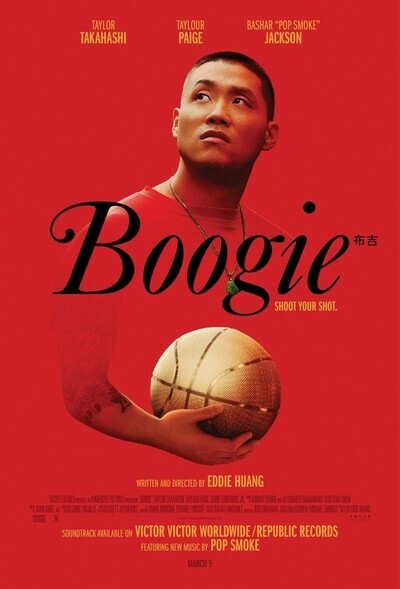 Rated R for language throughout including sexual references, and some drug use.