“Bloodthirsty” is essentially a werewolf movie, but it’s also more of a character piece than a creature feature. That distinction isn’t necessarily a good thing though, since you can only build-up a monster movie so much without delivering a halfway decent monster, werewolf or otherwise.

The makers of “Bloodthirsty” spend more time trying to highlight the dark side of Grey (Lauren Beatty), an anxious singer/songwriter who’s stuck on a delivering a sophomore album that’s worthy of her hit debut. Unfortunately, “Bloodthirsty” isn’t as relentless or as disturbing as its name advertises, so it doesn’t really matter how often we see the monster on the movie’s posters. At the same time: while psychological horror may be a fine way to dig into complex personal traumas, “Bloodthirsty” barely gets inside its antiheroine’s head.

In “Bloodthirsty,” Grey dreams about eating meat. She’s a vegan when we first meet her, so you can imagine how well she sticks to that personal commitment. Grey’s relationship with Byronic record producer Vaughn (Greg Bryk) is less predictable, though not much less. A dark cloud hangs around Vaughn, possibly because he hides in his isolated estate, but also maybe because people think that he murdered fellow musician Greta (thankfully never seen or heard) while collaborating on her last album. Grey knows of Greta’s sketchy demise, if only because her concerned girlfriend Charlie (Katharine King So) frequently reminds her. But Grey still agrees to visit, work, and sleep over at Vaughn’s house. Because while Vaughn scares Charlie, Grey is even more scared about “my second album flopping.”

That sort of declarative statement isn’t disappointing because it’s overstated, but rather because it’s typical of the movie’s uninflected and often literal-minded view of Grey’s subjective reality. There’s not much in this movie that isn’t neatly explained or blatantly implied by the movie’s all-caps dialogue and slow-burn plot.

We know everything that we need to know about Grey, which makes it harder to care about her character beyond a general hope that she’ll stop forcing herself into situations that require her to believe Vaughn. He seems pretty bad throughout, as Charlie often reminds Grey. He also says that he didn’t kill Greta, and Grey makes herself believe him since her album is “missing something,” but also because you can’t believe everything in the press, as she tells Charlie. So Grey repeatedly submits to Vaughn’s creative vision, and her music does improve. Not by much, mind you, though co-writer/songwriter Lowell’s songs aren’t exactly terrible either.

What really holds “Bloodthirsty” back is its creators’ general unwillingness to make Grey do more than just move around Vaughn’s shadow. Watching her struggle is sort of the point of this type of psychodrama, but it’s still frustrating to see that Lowell and co-writer Wendy Tout-Hill’s scenario doesn’t really push beyond the limits of that type of genre narrative. There are some stark, suggestive images throughout, particularly when Grey records songs in Vaughn’s private studio. But his reflection ultimately haunts our side of the glass window that separates his mixing board from her microphone.

To be fair: Grey’s not really interested in exploring his estate—Charlie says: “This place is doing something to you," to which Grey replies: "It's not this place”—so no Bluebeard-y shenanigans ensue. Instead, we get a lot of vague and dry conversations about past incidents, most of which don’t meaningfully inform the present narrative, as well as some overheated talking points about what Grey needs to do to take her music (and life) to the next level, like "You have to channel your rage or it will destroy you.” We hope and wait for Grey to have some kind of breakthrough, something that will drag her (and us) beyond platitudes like “Do you want to be a predator, or do you want to be prey?" (his line) or “God is a fascist, and He holds all the cards. He brought us together just to keep us apart” (her lyrics).

Too much is implied here, but without enough insight or madcap conviction to make it stick. I struggled to take Vaughn seriously (despite Bryk’s charismatic performance), especially when he eggs Grey on by saying that he sees “something primal” in her that she “needs to use” in her music since “it’s what makes you special.” That’s a theme, for sure, but it’s hard to chart Grey’s psychological collapse when so many assumptions about her character and behavior go unchallenged.

I think I know what Charlie means when she tells Grey that “Since you got here, your music is ... different,” but I also don’t think that there’s much more to Grey and her story than that line suggests. “Bloodthirsty” isn’t as deep or dark as it needs to be, and that’s way more frustrating than its general lack of werewolves.

Now in theaters and on demand. 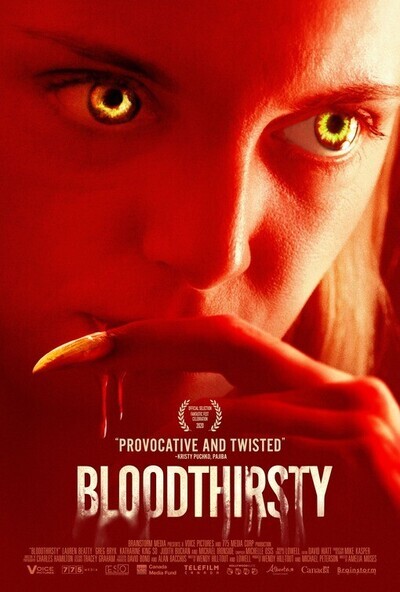