I’m usually uninterested in U.S. remakes of foreign horror films because the original is almost always better. In the case of Peter Thorwarth’s “Blood Red Sky,” dropping on Netflix today, I truly hope that some studio picks up the rights and redoes it just so they can get it right. From the “how do you mess that up” school of filmmaking, “Blood Red Sky” takes a phenomenal concept that mixes genre hits like “From Dusk Till Dawn,” “Snakes on a Plane,” and “Train to Busan” and just blows it on poorly choreographed action, momentum-draining flashbacks, and an interminable runtime. I was so excited to take this journey but quickly just wanted the plane to land so I could get off.

Nadja (Peri Baumeister) is traveling across the Atlantic with her son Elias (Carl Anton Koch) when it’s hijacked by a group of terrorists intent on taking it down. She clearly hides a secret but Thorwarth is depressingly uninterested in holding it for long. “Blood Red Sky” should be a film that takes a sharp turn at maybe the halfway mark or possibly even later when the “bad guys” realize there’s something they didn’t plan for on the plane. Imagine this story told from the POV of the loosely-defined terrorists that then shifts to Nadja when the chaos agents realize that one of the passengers is actually a vampire.

You read that right. “Blood Red Sky” is the story of a single mother who happened to have been bit by a creature of the night years earlier. She takes a drug to manage her “condition,” but the violence aboard the plane springs her to life, and it’s not long before she’s sucking the plasma of the men intent on murdering a plane full of passengers. Sounds fun, right? It's not.

This great idea is handled in stunningly routine fashion in “Blood Red Sky.” The sense of surprise or playfulness that you would think is inherent in a “Bats on a Plane” concept just isn’t here as “Blood Red Sky” only comes to life in bloody spurts after Nadja allows herself to go full vamp. And yet even then it feels like its teeth aren’t sharp enough. Even as it becomes less and less logically sound, it never finds its spark or sense of tension. It’s impossible to get invested in any of it, in part because the POV is mostly that of Elias, stunned at the insanity happening around him as he worries most of all about the fate of his mom. The Elias/Nadja connection is designed to add heart, and it does that at times—Baumeister and Koch have a believable connection—but it feels like it’s at the expense of what this movie needed to be more than anything: dumb fun. We're here for "vampire vs. terrorists." The mother/son thing can be used to elevate that but it shouldn't be the main focus.

One of the biggest problems is the under-lit direction throws a dim weighted blanket over the thrills. The fight sequences on the plane all blur together both in style and substance, so it becomes increasingly impossible to care just as the tension should be taking off (and there's absolutely no reason that a movie with this plot should be over two hours long). Throw in some clumsy attempts to integrate anti-Islamic sentiment into the narrative alongside a failure to really use the fact that the sun might come up on this transatlantic flight if they’re forced to reroute as a true ticking clock, and “Blood Red Sky” misses its potential in some way in almost every scene.

If there’s anything that works it’s how Horvath frames the relationship between Nadja and Elias, even if it gets too much attention. This is really a story of a mother trying to protect her son and the lengths that parents will go to not only to keep their kid safe but to hide their monstrous side from their progeny. It’s a shame to see such a theme wasted on a cinematic flight not worth taking. 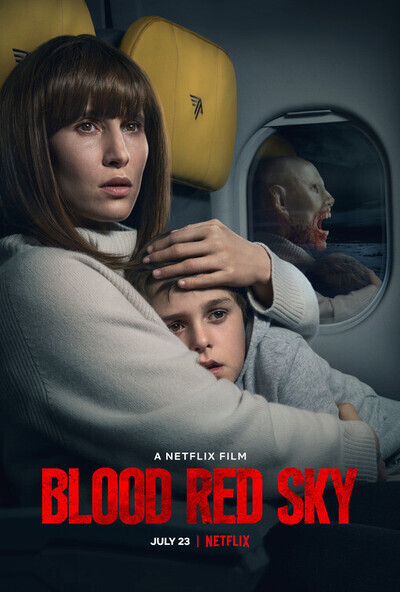 Criterion’s Melvin Van Peebles: Essential Films is the Story of a Cinematic Legend