Blood on Her Name

Noir is full of characters doing unreasonable, unwise or just downright stupid things to achieve some untenable goal. Their choices are criminal, driven by the basest instincts and are often wrapped in a delightful, hardboiled amorality. The plot situations escalate, tightening the screws as the antiheroes become more and more desperate. These people inhabit a bitter little world where there are no happy endings. Everybody has a fatal flaw and doing the right thing never crosses anyone’s mind.

The self-described “Southern Gothic neo-noir” “Blood on Her Name” attempts to tweak some of the aforementioned qualities of noir by saddling its protagonist with a conscience. It’s a bad decision that might have worked had co-writer and director Matthew Pope structured the film differently. What starts out as an intriguing cover-up of a murder becomes more and more hopelessly convoluted by the film’s insistence on delivering its information to you in drips and drabs. Allowing the viewer to piece things together on their own is always welcome, but the film’s desire to surprise and outwit makes it contrived.

Leigh (Bethany Anne Lind) is beholden to doing right by folks, whether it’s her juvenile delinquent son, Ryan (Jared Ivers) or the family of a man whose murder she may have committed in self-defense. Not that she’s a saint—at times, she lashes out unfairly in anger and she’s on some kind of pills whose dose, according to her dealer, depends on how much she wants to forget. She’s also the ex of a convicted felon whose arrest had something to do with turning her place of business into a chop shop. Those illegal activities come back to haunt her immediately after fade-in.

Aided by the moody and atmospheric color cinematography by Matthew Rogers, “Blood on Her Name” opens with a riveting post-murder sequence. The victim lays in a huge puddle of congealed blood on the floor of an auto garage, a bloodied wrench near his body. We hear Leigh’s terrified, labored breathing on the soundtrack before we see her huddled in a corner. The pacing is very good here, allowing us to watch as Leigh considers the best course of action. She wraps the body, cleans up the crime scene, takes the weapon of choice and hauls ass out of there. She disposes of the wrench in the lake as she paddles across it in a boat, but takes the body with her.

It’s clear that Leigh is no master criminal, but she makes mistakes that would get you an F in Committing Crime 101. For starters, her auto body shop has a security camera and has recorded the entire murder. She tosses the CPU into the dumpster without even bothering to erase it. I can buy that part, I mean, this is a small town and it’s doubtful anyone would go dumpster diving for tech products. What she does next I most certainly did not buy. She disposes of the body in the house of the man’s relatives, leaving an anonymous note in their mailbox that basically says “My bad! Sorr-reee!” “They deserved to know,” she tells her estranged father, Officer Richard Tiller (Will Patton). Otherwise, it would have weighed on her conscience.

“Blood on Her Name” tries to justify this by presenting several flashbacks featuring a young Leigh (Chandler Head) and Tiller. Seems her dad’s a corrupt cop, placing him firmly in the trenches of noir. Sometimes Leigh talks to her younger self, other times she walks into these flashbacks and observes. It’s a clunky device but these scenes are well shot and edited. Officer Tiller murdered a suspect in cold blood, then apparently disposed of the body. I assume that Leigh’s childhood concern that the victim’s family were left with no clue of his whereabouts contributed to her decision to hand deliver his corpse.

But noiristas like me gotta wonder: If your Dad’s corrupt, on the police force, and is adept at making bodies disappear, wouldn’t you call him if you were in the most dire of straits? He seems to be the only cop in town, too. We’re led to believe that her resistance stems from not wanting to figuratively sell her soul to the Devil, but considering her situation, Satan already has her soul on layaway.

One of the smarter things “Blood on Her Name” does is not re-stage the murder for us. All we see is the aftermath; the details are eventually filled in using dialogue. Of course, it turns out that this is a more complicated crime than we were first led to believe, and Pope and his co-writer Don M. Thompson add a protective, maternal dynamic to the proceedings that only works during the film’s climactic showdown between Leigh and Dani (Elisabeth Röhm), the wife of the slain man. Röhm and Lind are excellent in their scenes together, all of which stem from a missing piece of jewelry plot device lifted straight from Hitchcock’s “Frenzy.”

Of the male characters, Tiller is the only one who feels like he came with the neo-noir territory. Patton plays him with an unnerving menace mixed with crime-ridden common sense. Jimmy Gonzales is wasted as the clichéd minority whose sole existence is devoted to helping out the White lead, though at least he doesn’t get that character’s usual destiny and he has some chemistry with Ivers. “Blood on Her Name” is really onto something with Dani and Leigh’s Mama Bears protecting their cubs subplot, but by the time Leigh realizes she’s truly a chip off her Papa’s old block, too much frustration with her character had set in for me. Shakespeare said “conscience does make cowards of us all.” Here it just makes you a lousy crook. 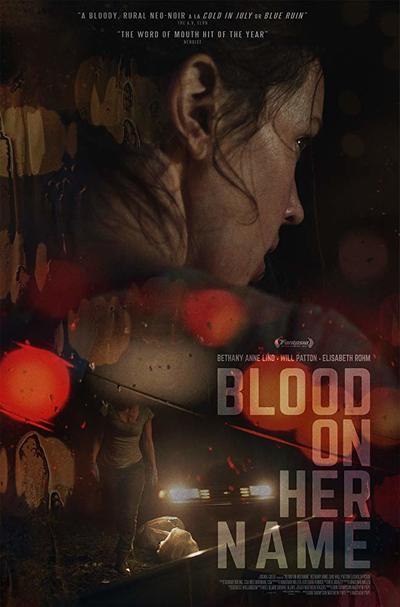 Will Patton as Richard Tiller