Here’s something you don’t see often in a crime film: A man trapped in the frigid wilderness falls into a stream and, in a life-saving attempt to stave off freezing to death, makes a fire with bundles of the stolen loot he’s been hiding. There’s enough of the ill-gotten lucre to make a rather expensive fire, a visual interpretation of the phrase “money to burn.” I don’t know if co-writer/director John Barr intentionally meant to convey such an obvious pun in “Blood and Money,” but if he did, I appreciated the gesture. It serves the darkly comic vein of karmic futility that runs through the cinematographer’s directorial feature debut. Its lead character has enough bad luck to fill a collection of blues lyrics, and more than once I found myself grinning at the ice-cold malice by which the film doles it out to him.

If only “Blood and Money” weren’t stretched so thin. More development of character, suspense and plot would have gone a long way toward making this stick to one’s crime genre-loving ribs. The villains are so expendable and dumb that they barely even register. The film’s antihero, Jim Reed (Tom Berenger) is more fleshed out, but he’s still rather flat. His own motivations remain too vague for us to latch on to him. When karma plays its tricks on Reed, we should be as aggravated as he is about his haplessness. After all, he’s trying to outwit and outrun four violent criminals, yet every time he gets his hands on a weapon, or even a leg up on the enemy, the gun is empty and the advantage is temporarily lost. Berenger effectively curses the gods, screaming profanity into the void while I smirked on my side of the screen. These situations inspired more of a response than his character’s frustrations did, because empathy requires three dimensions while schadenfreude only needs one.

And yet, there are ideas—depicted and deduced—that show that some care and thought were put into this material. For example, I concluded that perhaps the real reason the villains were so useless was because the first person Reed took out was the sharpest tool in their shed. Left to their own devices, they’re a hot mess of mistakes and flawed logic. There’s a line that hints that this is so, in fact. Additionally, since “Blood and Money” takes place in the untamed natural habitat of Northern Maine, its tone seems to mimic nature’s harsh code of survival of the fittest. There’s an Old Testament God sense of punishment at play here, where the wages of sin is death regardless of how nice a character is.

Unlike Reed, the most complicated—and nicest—character here is a war veteran named George (Jimmy LeBlanc). He is scripted well enough to makes you feel for him. The first 30 or so minutes are devoted to Reed’s life and his hunting for deer in isolation. A former Marine and war veteran, Reed meets George at what I assume is an AA meeting, approaching him after George gives a somber speech about trying to reconcile the wartime atrocities he’s seen and done with the peace he desperately seeks at home. Reed talks to George, and the younger man seeks his advice. Reed realizes he and George have a common tie, George’s wife, Debbie (Kristen Hager). She’s the nice woman who waits on Reed every day at the diner. We see George through her description of her marriage before we meet him, which in a way balances him out and gives him some humanity. So when George becomes the film’s sacrificial lamb due to being in the wrong place at the wrong time, his demise carries the film’s one true sting.

Regarding the death of the perceived criminal team leader: Her only appearance occurs before the action starts. Reed fatally shoots her when he mistakes her for the buck he’s been trying to bag. “You are so f--king dead!” she tells him as she bleeds out. Reed tries to get away with involuntary manslaughter, a crime the film tells us he’s committed before, but karma’s first swipe at him appears on TV: His victim is part of a five person crew who robbed a casino before fleeing into the unknown. Realizing he’s left his cigarette in the area, Reed has to go back to retrieve it. That’s when he discovers the bag next to the body. Instead of bagging one buck, Reed now has a bag filled with a million bucks.

From here, “Blood and Money” becomes a cat and mouse game between Reed and the four remaining heist members. Barr does his own cinematography, capturing wide images of the frozen landscape and contrasting them with the craggy, experienced face of his lead. Berenger’s no stranger to tracking through a dangerous wilderness—he did it in another crime film, Roger Spottiswoode’s 1988 film “Shoot to Kill”—so he’s convincing in his outdoor scenes. His character’s age, and an unknown sickness that has him coughing up blood, make him far less spry than his nemeses, so his ability to gain and lose the upper hand is a byproduct of whatever side of the luck scale he’s on at the time. The filmmakers keep it even until the final moments when they choose an unexpected side.

With its snowy location, incompetent crooks, twists of fate and slightly moral lesson on greed, “Blood and Money” has a bit of a Coen brothers feel to it. The Coens, however, would have put more weight into Reed so that his travails torture us the way they do him. Lacking that substance, the film has just enough wasted potential to be a near-miss. 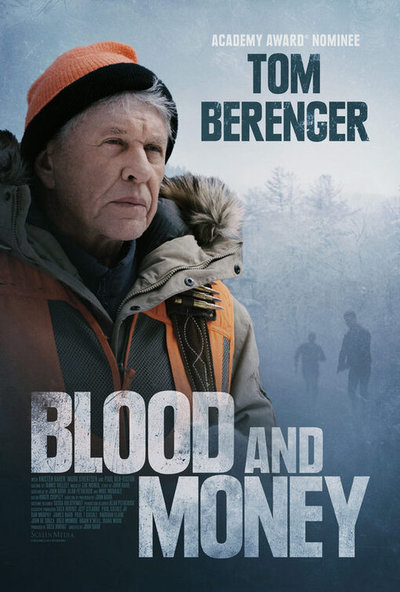