"I wouldn't wish that on anyone. Getting away with it."—Robert (Mark Strong), in "Blood."

A girl lies dead and brutalized in a skate park. She is filmed from overhead, giving the image a ritualistic aspect, with the swoops of cement rearing up around her. A crowd has gathered, horrified, and a group of cops stand around the body. The dead girl's cell phone rings. Nobody knows what to do. People don't get murdered like this in small seaside towns. The schools are closed. The community is traumatized. Heading up the ensuing investigation are two brothers, Joe (Paul Bettany) and Chrissie (Stephen Graham) Fairburn. They are members of the well-known local Fairburn family. Their father (played by Brian Cox), now retired and succumbing to dementia, was a cop. Being cops is part of the Fairburn tradition; it is in their blood.

Helmed by British director Nick Murphy (and executive produced by Sam Mendes), "Blood" immerses us from the start in a gloomy portentous atmosphere, all bright colors drained from the palette. Everything comes to us in shades of ice-blue, grey and black. When a deep red blanket appears in one scene, it comes as a shock: you had forgotten there was color in the world. The scenery is bleak and beautiful.

Off the coast, across some mud flats occasionally flooded by the tides, are a couple of isolated islands. Back in the day, Joe and Chrissie's father, when he was on the force, used to take suspects "out to the islands" and beat  confessions out of them. The islands represent a no-man's-land where anything goes. But they are also a place from which you cannot return.

Joe and Chrissie work as a team. Joe has been married for twenty years to a woman who understands the stresses of his job (Natasha Little) and has a teenage daughter (touchingly played by Naomi Battrick). Stephen Graham, an actor I have always loved, is excellent here as the younger brother, Chrissie. Chrissie is still a bachelor, although his long-time girlfriend (Zoe Tapper) is starting to get impatient. Joe is the leader, Chrissie the follower. They work well together, as long as those roles remain established.

Very quickly, perhaps too quickly, they bring in a suspect for the girl's death, a local guy named Jason Buleigh who had been arrested for indecent exposure before he found God, and has pictures of the dead girl in his creepy diary. He is played with an irritating psychotic smirk by Ben Crompton (from "Game of Thrones"). And one drunken night, restless and frustrated at the bureaucratic slowness of the investigation, Joe and Chrissie haul Jason "out to the islands." Things do not go as planned.

All of this is pretty formulaic television cop-thriller stuff; it is the acting, the direction, and the superb production design (those rooms and houses and apartments feel inhabited by very specific people) that makes this a successful and often very emotional thriller. The film is not about "who did it." It is about the compromises that people make along the road of life. It is about how we lose our way. It is about the dynamics of family, and how ugliness and fear can be woven into the fabric of how we operate.

Paul Bettany's guilt is at times overpowering. From the moment he takes that suspect "out to the islands," he is a changed man. Bettany is in agony for the majority of the film, and he is almost animalistic in his desire to free himself from the trap. Stephen Graham is heartbreaking as the more emotionally transparent brother, whose girlfriend knows instantly that something has gone terribly wrong.

Another cop, a quiet-voiced observant man named Robert (played beautifully by Strong), continues investigating the case, trying to discover other leads they may have missed. Everyone seems concerned that Robert is still single. It's an ongoing joke. Joe's wife tries to set him up on dates, his friends all tell him he's a good-looking bloke, why doesn't he get out there again?

In one scene, Robert tells Chrissie about a girl he knew when she was 18. He fell in love with her and she "broke" him. "Why do we let people break us?" Robert asks (and it is a testament to Mark Strong's talent that he underplays the line so well that it really seems like a real question, and not a highlighted "Here is the Theme of the Movie" line). Chrissie, harassed and full of secrets, answers "Love."

At times, "Blood," feels like a slightly-filled-out television police procedural with better cinematography, but the performances have an almost Shakespearean grandeur. The falls from grace are extreme. Everyone has so much to lose. Souls are at stake. The question isn't how to get away with murder. The question is how to live with yourself if you do. Filled with darkness and shadows, with a tension like an anxious heartbeat, "Blood" is surprisingly effective. It has a haunting echo. 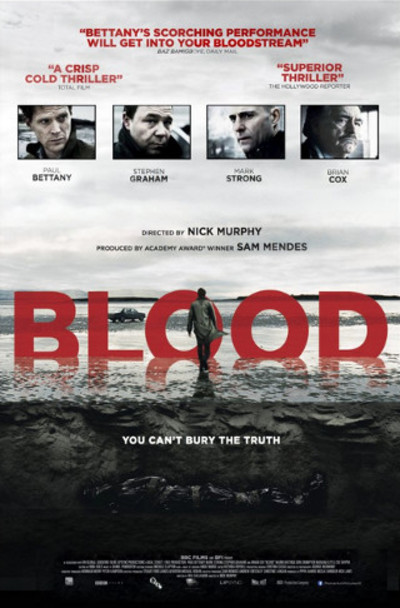