Blink of an Eye

On February 18, 2001, NASCAR racer Michael Waltrip won his first race after 462 losses, achieving this underdog victory at the historic Daytona 500. Such a euphoric moment was met with incredible tragedy just minutes later, as his racing partner and friend Dale Earnhardt was pronounced dead after a collision that happened right before he could get to the finish line. It was minutes into Waltrip's press conference that NASCAR made the announcement publicly, commencing a sports-wide grieving process for an enterprise where car wrecks are just part of the job.

Talking about this life-changing incident at the beginning of the documentary “Blink of an Eye,” which is based off a book co-written with Ellis Henican and executive produced by Waltrip, Waltrip says the saddest thing in the entire movie: “17 years later, I haven’t gone to therapy, and I still struggle with it.” This documentary then becomes a pseudo-session for him, at least in that it has him recounting his life, while others NASCAR personalities, including his racer brother Darrell Waltrip, chime in. “You gotta keep pushin’,” Waltrip concludes in the film's opening segment, and with the slide of a blues guitar and the usage of generic down-home stock footage, it’s off to Waltrip’s life story of being an underdog, racing in the shadow of his older NASCAR driver brother, Darrell.

There are numerous jarring focus choices with how director Paul Taublieb approaches this story, starting with how it introduces the tragedy—before the credits are even over, before we understand what movie we're even seeing, and in between staged footage of Waltrip driving a pick-up through the countryside, with a sad look on his face. He’s shown turning up the volume on a country ballad that’s playing for all of us to hear, and it’s called “Blink of an Eye.” A voice on the radio dedicates it to him. It’s a strange start, and the focus on Waltrip primarily is even more jarring as it takes an event and makes it more about Waltrip, framing Earnhardt as a supporting character in Waltrip’s racing career.

This documentary proves to not so much be about the event—which is visually covered seemingly with the help of whatever broadcast footage was available—but about Waltrip, building an hour of backstory to the event that should have been the happiest in his life. And yet framing this tragedy as Waltrip not getting some type of rite of passage, with the sadness of his friend dying in a car wreck, is an incredibly tricky thing to balance. This movie’s dry, facts-first approach does not have the capacity to pull it off.

Approaching such a profound event from a personal angle is often the best route, but “Blink of an Eye” is an example of when it feels too catered; if you didn’t like Waltrip for his story and his efforts to talk about it, it would come off as pretty narcissistic. There’s a brief moment when racer Richard Petty is about to start his interview—in the same green back-lit space as all the other talking-head interviews—and Waltrip interjects from off-camera, wanting to thank Petty for participating before the questions can commence. In one light, it’s a sweet gesture between two friends. In another light, it creates some concern that Waltrip would even be there in the first place, and how this documentary could be so much better if its subject didn’t have a looming presence.

This is an inside-baseball recount of a NASCAR story that could have made for a decent episode of ESPN’s “30 for 30” series, and it blatantly feels like it’s specifically for NASCAR fans. Racing figures Dale Earnhardt, Jr., Darrell Waltrip, Richard Petty appear, and for some viewers that might be enough. But it doesn’t have that accessibility with sports that the best ones do—it’s an easy watch, but if you can’t tell the difference between a Monster Energy NASCAR Cup series and the Daytona 500, you might be a little confused during some emotional passages, or distant.

As a feature-length rumination on such a devastating sports tragedy, the themes of hope, loss, family, and friendship are all there under the headline, but "Blink of an Eye" is too narrow to explore them. Any soul searching the subjects have done is only to be assumed, or hoped for, but not felt. I just hope that Waltrip knows that he’s only just begun in his own healing, and that going to therapy is a beautiful victory itself. 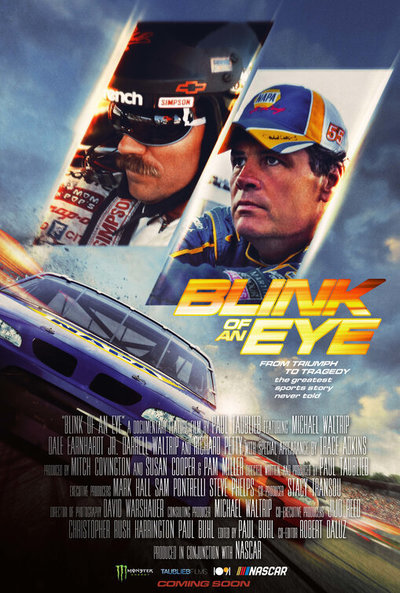 Michael Waltrip as Himself

Dale Earnhardt Jr. as Himself

Darrell Waltrip as Himself

Richard Petty as Himself