Few feelings match the exhilaration of watching four underdogs, hailing from difficult circumstances, coming together to achieve a goal once thought unimaginable. In the best of these stories, the viewer is acutely aware of the weighty sacrifices these pathfinders must make. Such stories humanize these intrepid travelers with a lens that reaches beyond their hard journey, and focuses on their unbendable spirit.

Joseph, Tinashe, Pardon, and Marlvin left their homeland of Zimbabwe in 2008 during the country’s hyperinflation crisis—when the price of food and fuel heightened, and starvation and unrest surged—for South Africa, in the hopes of starting a new life. The quartet didn’t know each other before they intersected in their new country, but each arrived with a similar experience: They encountered death and danger, lost their community and loved ones, and gave up their chosen professions with minimal odds for success in a historically racist nation already hostile to their arrival. Though they’d never tasted wine before, surprisingly, they all fell in love with the craft of identifying wine, becoming sommeliers. Now, they hope to infiltrate another white world by competing as a team at the World Wine Tasting Championship in Burgundy, France.

When you hear about these men’s stories, the immediate thought is of “Cool Runnings,” which details Jamaica’s first bobsled team, a similar band of outsiders participating in a sport that’s usually been the domain of white Western countries. But Robert Coe and Warwick Ross’ “Blind Ambition,” an inspirational, heart-wrenching tale about four Zimbabwean immigrants working in South Africa as sommeliers is different. It doesn’t deal in easy gags or low-hanging speeches. It understands both the thrill and the agony of desperately waiting for your dream to ripen on the vine.

“Kumusha” is a shona word for home, explains Tinashe. Much of this competition film concerns the importance of one’s origins, and the four men are often haunted by what they’ve left behind. Editor Paul Murphy effortlessly weaves through each sommelier’s painful personal history: Joseph and his wife Amelia (who we never meet) left their two-year-son behind with family, as smugglers took the couple across the South African border in a suffocating railway container. Joseph can still remember the images of other refugees fainting from the heat. Upon arriving in South Africa, the quartet, like many other refugees, witnessed violence against them. Footage from 2009 recalls the grisly images of refugees running through the streets of Johannesburg to escape bloody beatings and vicious reprisals from white South Africans.

The team also frequently shares stories about the muggings that are still occurring in South Africa by distressed refugees. The quartet carry the burden of these memories and worries together through every tasting, over every hurdle they encounter in their fundraising efforts to attend the wine championship.

As Coe and Ross outline these tragedies, they also delve deeper into the wine world: The difficulty of identifying these vast and varying assortments by grape variety, country of origin, region, producer, and vintage. A subtle counterbalance is established with these men’s experiences. Their passion, self-attained knowledge, and dogged determination then takes center stage, since the World Wine Tasting Championship doesn’t just require one’s individual talent in a team setting. It also requires money, which naturally deters outsiders from competing (a key reason that, when a group picture of contestants is shown, they’re all white), and a coach. The quartet initially rope in Jean Vincent, South Africa’s coach, to temporarily guide them until Denis Garret, a formerly respected taster, can take over.

Garret is a slippery character, and he becomes a bit of an easy villain as the bumbling and vain coach who appears as an unsuspecting obstacle to Team Zimbabwe’s success. He might also have bad blood with JV; the friction between the two tasters is the documentary’s most unyielding component. And yet a sense of deeper fissures that existed before filming pervades the narrative. Coe and Ross’ camera exists on the periphery of this professional rivalry, giving a picture that resembles a messy, unfocused reach for drama.

“Blind Ambition” manages to overcome these detours by never altering its aim of exploring the foreign world of wine through the eyes of men who are not only proud of themselves, but of their country too. And while the sight here of fans’ supportive messages filling the screen can lean too close to cliche, these emotional levers still provide enough reason for us to cheer at the opportunity these sommeliers made for themselves, and how they turned it into a chance for all. 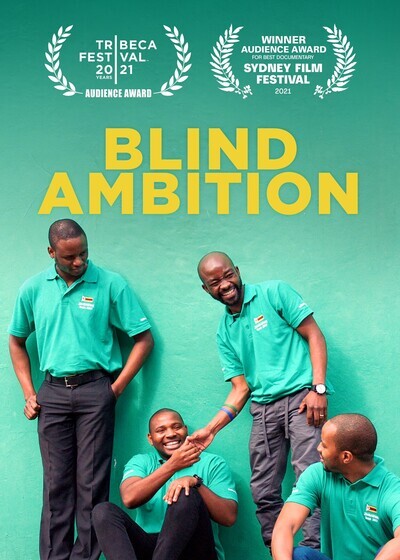 Denis Garret as Self

Jean Vincent Ridon as Self