A family moves from Bogotá to Atlanta in pursuit of the American dream in “Blast Beat,” the earnest yet muddled feature debut from Colombian-American filmmaker Esteban Arango.

In expanding his 2015 short of the same name, the director and co-writer awkwardly juggles several plot lines and themes, including racism and classism, sibling rivalry, kids’ aspirations vs. their parents’ wishes, a couple of barely-there romances, a potentially groundbreaking scientific discovery, a whole lotta death metal, and even Y2K fears.

In the middle of all this are real-life brothers Moises and Mateo Arias, serving as co-stars and executive producers. While their fraternal bond gives “Blast Beat” an anchor of authenticity, the fact that they’re way too old to be portraying high schoolers at this point is a major distraction. Both played these roles in Arango’s short film; reprising them for the feature six years later, they’re now in their mid-20s, and they very much look their age. At the same time, Wilmer Valderrama and Diane Guerrero are both way too young to be playing their parents: He just turned 41, she’s only in her mid-30s. It’s the kind of age disparity that didn’t bother me when I was a kid watching “Grease” in the late ‘70s—then again, I didn’t understand what Rizzo was singing about when she worried that she was pregnant—but as a film critic now, it takes me out of the experience entirely.

At the start, though, the two are goofing around like kids do: hanging out and joking, bike riding and skateboarding. It’s the summer of 1999, and they’re documenting their last days with their friends on their video camera before moving to the United States. Carlos, or “Carly,” as he’s known to pals and family (Mateo Arias), is the older and more serious one of the two—a science prodigy with dreams of attending a prestigious aeronautical institute and going on to a career with NASA. But he also has a rebellious side, which includes a love of pounding metal (and dear God, is there a lot of it to punctuate his extreme moods) as well as a tendency to drink too much. Younger brother Mateo, known simply as “Teo” (Moises Arias), is the carefree artist whose work mostly consists of graffiti and whimsical self-portraits. He’s brash and rude, given to running from police and blowing stuff up for the hell of it, but he also shows a responsible side when it comes to caring for his brother.

The boys and their mother (Guerrero) join their father (Valderrama), who’s already been in Atlanta for the past several months and established what he’s presented as an idyllic new life for them. (Their reason for fleeing Colombia is a bit vague but has something to do with the possibility of some shady dealings on the dad’s part, as well as a desire to escape the country’s political turmoil.) When he picks them up at the sweltering airport in a beat-up truck and drives them to a rundown house in a sketchy neighborhood, it’s their—and our—first indication that perhaps the road ahead won’t be so smooth. But there’s not much to either of the parents beyond a few facile platitudes about setting clear goals and trying to fit in, which Carly does by showing off his intelligence in class and Teo does by seeking out the stoners. Both find quasi-girlfriends in these pursuits, relationships which also don’t contribute much to the brothers’ journey.

What’s missing here is a sense of conflict or tension. Arango piles one melodramatic situation on top of another, which causes some legitimate dilemmas to get lost in the shuffle. Too often we get reaction shots of Carly and Teo standing around, looking worried, mouths agape. What would seem like a crucial plot point about deportation nearly drops off entirely. The fact that the whole story takes place on the cusp of a new millennium—which gripped everyone, everywhere with worries about technological meltdowns—is an afterthought, fodder for jokes at a New Year’s Eve party. Despite the bilingual dialogue, Arango could have used a richer sense of culture and place—both within the family and the city of Atlanta—to help us understand these characters as they try to hold onto their identity while also assimilating into another.

Whatever weaknesses exist, though, the connection between the Arias brothers provides a consistent through-line. Their resentments and rivalries always feel believable, as does the way they both sabotage and strengthen each other. We see their bond in big gestures and small details, like how they do both push-ups alone in their bedrooms to blow off steam. Their many challenges wrap up too neatly, but there are enough genuine moments of truth in “Blast Beat” to make you wish there were even more. 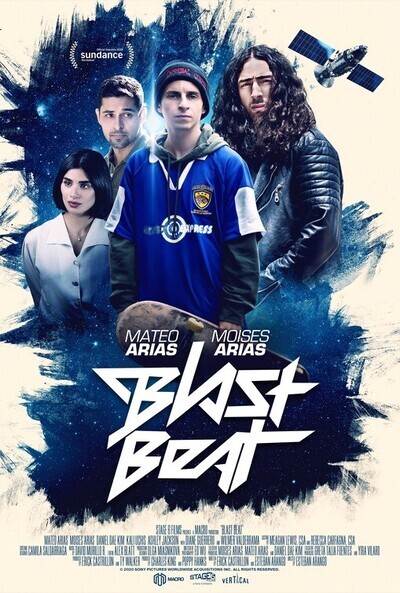