Blade of the Immortal

Takashi Miike is the fearless samurai of filmmaking, releasing his 100th film this week in his adaptation of Hiroaki Samura’s “Blade of the Immortal.” As a rebellious pioneer of cinema, his status may have lessened a bit internationally since the heyday of "Ichi the Killer" and "Audition," but he has lost none of his craftsman’s skill, as evidenced in every frame of this gorgeous, epic tale of endless carnage. “Blade of the Immortal” feels like a film that could only be made by someone with a long career in film and a lot of life experience to bring to it. In a sense, it is about a man going through routine after routine, trudging forward through a life he no longer wants to live. Of course, I’m not suggesting Miike is sick of filmmaking—if anything, the cinematic energy here proves otherwise—but that “Blade of the Immortal” required the hand of an experienced director, and they don’t get much more experienced than Miike.

“Blade of the Immortal” tells the story of Manji (Takuya Kimura), a samurai who is blessed/cursed with immortality. He has had generations to mourn the loss of the only person he cared about and lament the code of honor he can no longer follow. He is not an immortal in the superhero sense of the word, but an immortal in the way that we often see ghosts represented in fiction—as people forced to stay on Earth and forever regret their sins. Of course, Manji gets a final chance to matter to someone when he’s found by a girl named Rin Asano (Hana Sugisaki) after her parents are killed by group of assassins who are trying to change the way of the samurai.

That final phrase is key to the narrative of “Blade of the Immortal.” Kagehisa Anotsu (the nearly movie-stealing Sota Fukushi), the man who leads the assassins who killed Rin’s father, comes from a different school of swordplay and represents a darker, more violent future for the samurai warrior. Forms of combat become a major current in “Blade of the Immortal,” especially as more and more styles come into play and politics between rival schools become important. Manji is a practitioner of a lost art and style, which again feels like something only a man who has made 100 films could adequately convey.

Of course, “Blade of the Immortal” isn’t all about codes and politics—it’s mostly about blood and guts. This is Miike closer to his gonzo violent style of the '90s and '00s than he's been in a long time. Owing a great deal to the fact that this is based on a manga that ran for 30 volumes, “Blade of the Immortal” is remarkably episodic. It basically breaks down to a series of one-on-one fights between Manji and, for at least the first hour, members of Anotsu’s team of assassins. They are wildly exaggerated affairs, complete with supernatural powers and wire-based combat and geysers of blood. They are often breathtaking fight sequences, as Miike finds ways to make these one-on-one affairs distinctly unforgettable. There’s the man who shares a key trait with Manji; another who cries remorseful tears after she kills; one who looks like a walking nightmare with human body parts strapped to his own—and Miike accelerates the combat in “Blade of the Immortal” to the inevitable multi-enemy battle that includes literally rivers of blood. Hundreds of people die in “Blade of the Immortal,” most of them losing a limb or two as they do. For pure samurai action, it's a must-see.

On the other hand, over the course of two-and-a-half hours, even a fan's samurai patience can be tested. It doesn’t help that the story of “Blade” gets a little cluttered, introducing new enemies and potential allies at a point when you wish it would be wrapping up instead of starting down another road. And Kimura’s performance starts to feel thinner than it should, not merely by repetition but by the actor being outperformed by some of his co-stars. He lacks the true charisma to ground this film in the way it needed to sustain interest for its admittedly overlong running time.

Having said that, there’s still something about the 56-year-old Miike working in this register 100 films into his career. There are enough flashes of brilliance through all 140 minutes of “Blade of the Immortal” that its sins can be easily forgiven. And it’s that balance of Miike’s experience with his retained childlike energy in making a kick-ass samurai movie that keeps this journey engaging. It feels like a film that no one else would have made in quite the same way as Takashi Miike. I hope he makes at least 100 more. 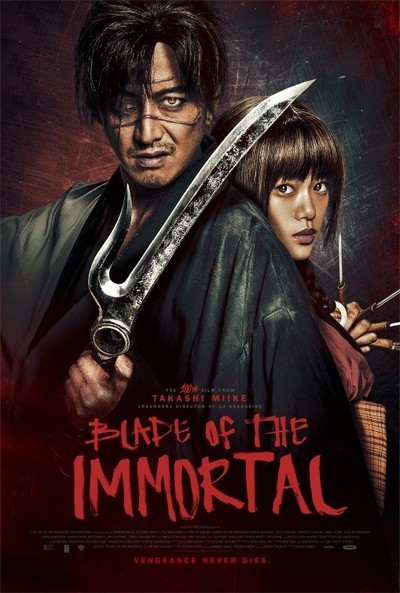