Anna Sewell’s “Black Beauty” has seen a number of on-screen incarnations since the Silent Era. The last adaptation from 1994 was a video store staple, its amber-colored poster illuminated a gorgeous black horse rearing up, a display of both natural beauty and strength that caught your eye every time you passed it—even if you’ve already seen the movie. It’s no surprise that as memorable as that version was a generation ago, there’s a new adaptation for younger audiences who have yet to learn about the bittersweet saga of what can happen to these gorgeous creatures.

Like in the source material and its many adaptations since, director Ashley Avis’ “Black Beauty” begins with the picturesque life of a young horse, except this time she’s a filly and not a colt. Kate Winslet voices our mustang hero from her humble roots in the American West (actually, the film was shot in South Africa), through its journey through the hands of many different owners. Some are kind, like John Manly (Iain Glen) and his niece, Jo Green (Mackenzie Foy), who comes to live with John after her parents’ death. It’s during this difficult time for humans that Black Beauty bonds with young Jo. Things are going about as well as they could be going for Black Beauty after losing her home and her herd when circumstances beyond John and Jo’s control force her to be sold into the hands of other strangers, including a rescue worker, a farmer and a few horse carriage drivers.

Avis’ adaption, which she also wrote and edited, brings Black Beauty to the present day U.S. from Victorian England. Here, Black Beauty is both harmed and helped by cell phones and forced to contend with spoiled young rider, Georgina (Fern Deacon) and her ruthless mother, Mrs. Winthrop (Claire Forlani), who wants her daughter to win dressage trophies. In an additional twist, the character of Jo, originally Joseph Greene in the book, is given much more backstory than any of the other of the horse’s handlers and owners. Although she’s missing for a sizable portion of the movie, the horse thinks of her constantly, like a great first love that got away. "Black Beauty" also gives Jo a love interest, George (Calam Lynch), the antithesis to his mother and sister’s treatment of horses. Through Jo’s experience, the movie softly touches upon class, gently pointing out the differences between Jo whose uncle works at a stable to the rich girls who make fun of her and the Winthrops, who more or less make their own rules because they own their own stables. However, it’s a bit jarring to take the reins of an animal’s story and hand them over to build up the human characters, but after a time, the movie switches back into Black Beauty’s point-of-view.

While much of this “Black Beauty” strays from the original, the spirit of empathy and combatting animal cruelty remain intact. Some of the harsher scenes from the novel show up here as well, including the sobering moment when Black Beauty realizes one of her former stablemates, Ginger, endured a terrible life that comes to a heartless end. The film also references the uncomfortable beauty standard placed on these animals for competitions. Mrs. Winthrop is obsessed with seeing the horse’s head held high for dressage, a reference to the Victorian standard that also forced horses’ heads into uncomfortable, unnatural positions. The publication of the book helped fade the practice from most mainstream use, but as the movie shows, the cruelty that keeps a horse working all day and night pulling a carriage or forced into dangerous situations that threatens its well being is just as prevalent as ever.

Avis’ film clearly adores its four-legged subjects. Through David Procter’s cinematography, she recreates the look and feel of one of Disney’s nature documentaries for the first moments of Black Beauty’s life. It’s a golden-hour, idealized look at a herd of horses galloping through fields and in the shadows of mountains. No wonder leaving these scenes feels like a true loss. Without humans and their drama to get in the way, we can just appreciate the horses without our meddling, saddles, bridles or whips. This might just be the wish of a former horse rider, but I’d much rather spend more time with Black Beauty than with Jo or any of the other human characters in her path. It’s a narrative choice that may work better for some than others, and it probably won’t ride well with devotees of the book. 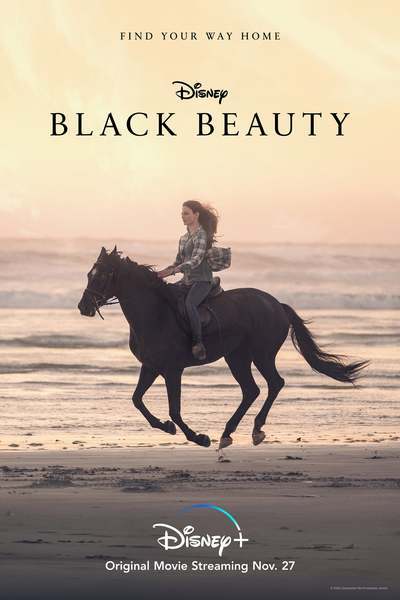 Writer (based on the novel "Black Beauty" by)