Emelie Mahdavian’s documentary “Bitterbrush” observes two modern-day range riders during a months-long hitch, as they herd and drive cattle on a remote Idaho mountain range. I must confess that this description would not normally spark much interest from me—I'm not particularly inspired by scenic vistas, I'm skittish around animals of all sizes and breeds, and when my mother asked my nine-year-old self if I wanted a pair of cowboy boots to go along with the ones she was already getting my younger brother, I apparently responded with an epic eye roll. And yet, despite my ostensible disinterest in the subject at hand, I found myself mesmerized by this spare, affecting, and powerfully humane work that may seem quiet and reserved, but which ends up packing a surprisingly powerful emotional punch by the end.

The subjects of the film are Hollyn Patterson and Colie Moline, two friends who have known each other and worked together for about five years or so—neither of them is exactly sure. Nevertheless, as we see them as they begin setting up the cabin where they'll be spending the next few months tending to the livestock and a number of dogs, there's an unspoken sense of camaraderie between them that suggests they are simpatico both as friends and co-workers. And yet, while both enjoy their work, each one has a sense that it's not necessarily one with a future. Hollyn, for example, has a fiancee, Elijah, who occasionally drops by and she recognizes that while a largely nomadic existence is okay for someone on their own, it would not be a plausible lifestyle choice if she were to become a mother. Colie, on the other hand, is happily single but keenly aware of the economic realities that are make it virtually impossible for independent ranchers to keep going in the face of increasingly omnipresent corporate interests.

Over the period of time covered in the film, not much happens to Hollyn and Colie from a dramatic perspective—there are no disasters or major crises that befall them. They go out and do their work with no muss or fuss in ways that show they are very good at what they do. When they come across a sick cow, they demonstrate gentle care and compassion as they lead it towards the others, a consideration that's all the more intriguing given the cattle's final destination. Their respect and reverence for nature shines throughout, even if you find their work to be personally appalling.

And yet, while the film does not really have any “big” moments, there are a number of scenes that are both fascinating and deeply moving. At one point, Hollyn talks about a beloved dog whose ashes she still carries with her—as someone who moves from one job to the next, there has never really been one place she has considered like home to then bury them. Colie delivers a wrenching monologue about her mother’s passing after spending three days on life support—as invasive as the experience proved to be, she's nevertheless grateful that she was able to use that time to fully memorize the look and feel of her mother’s hands. There is also an extraordinary scene that runs for well over 10 minutes in which Hollyn quietly and patiently tries to break a recalcitrant filly they have dubbed “Marilyn”—a sequence that reminded me of the equally powerful scene in “The Black Stallion” in which a boy and a horse slowly get to know one another.

Visually, "Bitterbrush" is often quite breathtaking; cinematographers Derek Howard and Alejandro Mejia do a wonderful job of observing Colie and Hollyn in an unobtrusive manner while at the same time capturing any number of stunning panoramic vistas that are all the more impressive for their relatively offhand manner. Mahdavian and editor Curtis Clayton find just the right contemplative rhythm for the story while eschewing documentary name-stays like title cards, narration, or talking head-style interviews. The only real stumble comes with the use of some Bach piano pieces—the music is meant to emphasize the beauty of the environment and Colie and Hollyn’s love and respect for it, I suppose, but there are some moments where you wish that Mahdavian had let the sounds of nature speak for themselves.

That quibble aside, “Bitterbrush” is a lovely, moving film and if the opportunity arises for you to see it in theaters this summer, you should take it. While the majority of blockbusters will most likely evaporate from you mind within a few days of seeing them, “Bitterbrush” is likely to stick with you for a long time afterwards. 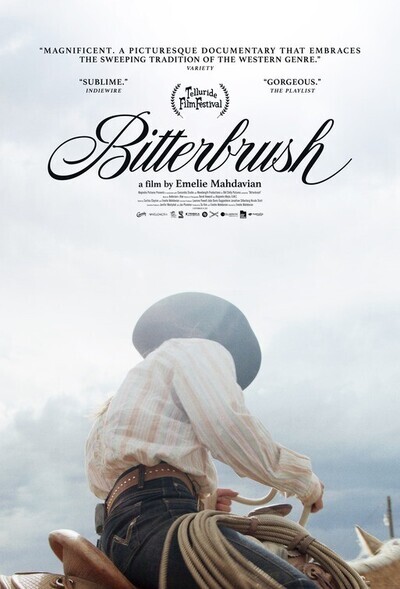 Hollyn Patterson as Self

Colie Moline as Self