“Bite” is a low-budget body horror film complete with warnings about having better friends and not marrying men you don’t really love. It’s got echoes of “The Fly” (and, more recently, “Contracted”) embedded in a story about a young woman scared of her future, until she doesn’t really have one anymore. At its best, and it gets pretty good after a really rocky start, “Bite” is a clever gorefest with some creative twists and turns. It’s one of those early career horror entries in which the filmmakers don’t quite nail the set-up or the landing, but the gooey center of the film works for those with a high tolerance for things that might make a majority of the population queasy.

Bride-to-be Casey (Elma Begovic) and her two friends Kirsten (Denise Yuen) and Jill (Annette Wozniak) are on a bachelorette party trip as the film opens. Using found footage style, we see the girls on the beach, at clubs, in their rooms, etc. Clearly, Kirsten is the nicer of the two friends, while Jill is a bit catty, and eager to film awkward, possibly even scandalous moments. Right from the beginning, “Bite” is drawn from the “cautionary” genre of horror films that teach us that if we would just never leave the safety of our couches, everything would be OK. And if you’re gonna be crazy enough to go all the way out of the country for a bachelorette party, don’t be stupid enough to go off the beaten path. That’s what the girls do one day, swimming in a beautiful lagoon when Casey gets bit by something. “It’s just a little bite,” she says. We know better.

When Casey gets home, the poorly-drawn characters take center stage for almost long enough to sink the film. We meet Casey’s fiancé, Jared (Jordan Gray), and her horrible soon-to-be mother-in-law (Lawrene Denkers). Jared is the kind of two-dimensional character really designed purely as another thing for Casey to worry about. When she returns from her trip, he greets her with an antique high chair (he wants kids, she’s not ready) and then goes to work. The allegory of a young woman being pressured to have children by a workaholic fiancé with a horrible mother is so broad that it almost approaches parody, but not quite, so the film lingers in that in-between space for a bit too long, in which we’re not sure how seriously we’re supposed to take these caricatures. The acting in these early scenes is rough, and even the framing feels off. You can tell the filmmakers and performers are kind of treading water until they get to the “good stuff.” Any horror fan will tell you, the set-up can often be more rewarding than the follow-through if it’s done well.

After the rocky first act, “Bite” starts to find its footing. The concept of pairing quarter-life crisis concerns with body horror starts to click as Casey begins to notice the bite on her leg is, well, oozing and growing. There’s also a bit of a sexual assault allegory in that we learn that Casey woke up on the beach without her clothes or her engagement ring during the trip, thinking that one of the guys she met there must have assaulted her. It's understandable that she’s too traumatized and scared to respond to what’s happening with her body.

And then “Bite” gets crazy. Sure, there’s vomiting pus, but as someone says in one of my favorite lines long after Casey has gone full-Brundlefly, “People always get sick after vacations.” The movie clicks during a dream sequence of all things, as Casey is imagining a surprise party of all of her friends shouting “babies, babies, babies” as she gives birth to hundreds of insect eggs. It’s a moment Cronenberg himself would have loved. And, from there, “Bite” turns up the insanity. By the halfway point, Casey’s apartment is covered in egg sacs and her body is falling apart. And then people come to check on her. The fact that anyone would walk into her cocoon-apartment and not just scream and run away stretches logic, although the film is arguably at its best when it embraces its own ridiculousness.

At a certain point, it becomes clear that “Bite” has basically written itself into a corner, and it doesn’t escape in a way that really satisfies, but the bulk of the film is a creative, icky ride. 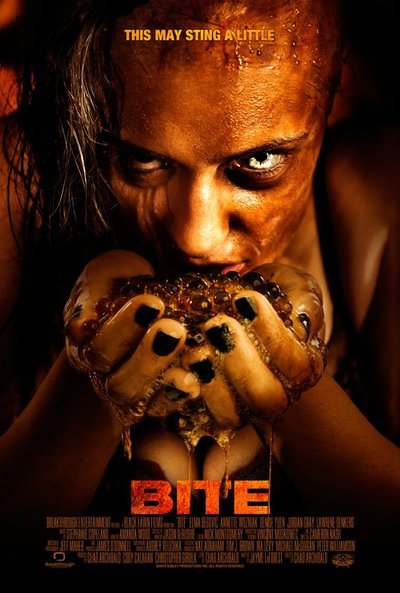